It came a day after a bomb threat at the University of Minnesota-Twin Cities campus, as well as multiple swatting calls regarding threats at schools across the state.

RELATED: Over a dozen hoax calls regarding active shooter made at school districts statewide Wednesday

As of Thursday, Department of Public Safety Commissioner John Harrington said those swatting incidents remain under investigation but one person is believed to be responsible for them all. He added that partners from across the country had alerted the state and local departments that it a large-scale incident like that was a possibility.

Walz and state officials discussed the need for more law enforcement officers, especially in the Metro Transit Police Department, which is looking to hire around 60 people. 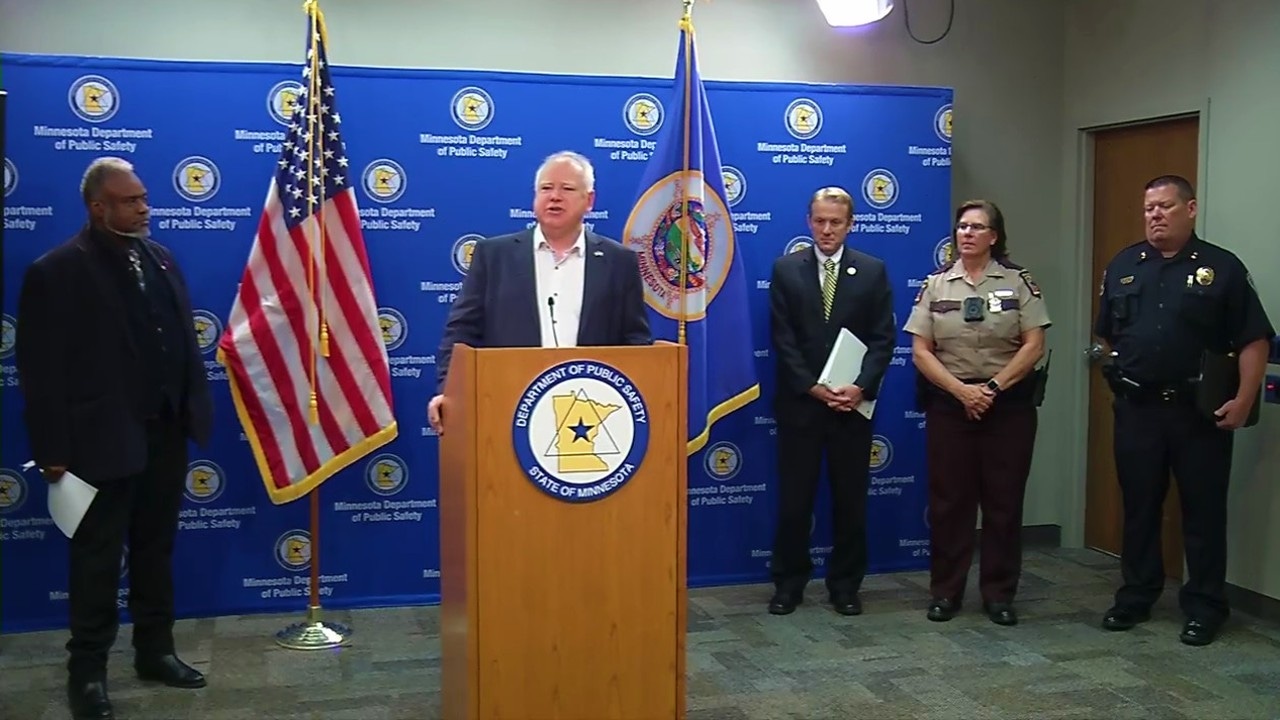 “I will tell you this, when there’s a lot of people on that system, we don’t get calls. It’s safe,” Grates said. “We’re there, we take care of you. Bad guys don’t like to be around good guys. The more good guys that are out there, the safer we’ll all be in our communities,”

On Metro Transit safety, Grates added, “I just want to tell everyone that we’re hearing, we’re hearing your voice, we’re hearing what you want, you want the police presence out there, you want that safety on Metro Transit, and we’re listening, we’re doing what we can to provide that. We’re not quite where we want to be yet with that — we’re short-staffed, that’s no secret, that’s the story across the state of Minnesota — but it’s what you do with staffing that you have at the time.”

Bureau of Criminal Apprehension (BCA) Superintendent Drew Evans said the agency continues to work with local agencies to crack down on violent crime in the Twin Cities, which he said has resulted in nearly 400 arrests, the seizure of 244 illegal guns and the recovery of almost 20,000 fentanyl pills since the operation began in the spring.

“Our role is to provide specialized resources, expertise, analysis, systems so that local agencies can make decisions and keep their communities safe. And that’s the role of the state, is to provide that assistance, and that’s exactly what we’re doing in the city of Minneapolis and surrounding areas, and have been doing so,” Evans said.

Evans also called attention to the BCA’s recent seizure of “rainbow fentanyl” in the Mankato area, the first time the agency has seen that in the state.

Walz was also asked about the Feeding Our Future indictments that were announced earlier this week. While criticizing the “absolute heartlessness” of taking money from hungry children, he defended the state’s efforts in identifying and trying to stop the fraud, and also blamed the court that forced the state to continue paying the organization despite the serious fraud suspicions.

“We caught this fraud, we caught it very early, we alerted the right people, we were taken to court, we were sued, we were threatened with going to jail, we stuck with it, we got the FBI out there, and we have 48 people under indictment,” the governor said.

“While we’re focused on the current crimes that are out there, we haven’t given up on our search for the murderers of Aniya (Allen) and the shooters of Ladavionne (Garrett). I wish I could say those cases were already solved … but at the BCA, Department of Public Safety, we haven’t forgotten and we’re still coming after the guys that did those crimes,” Harrington said.

Finally, Walz called on Minnesotans to come together to slow crime and expressed support for law enforcement.

“Our job as Minnesotans is to rally around this, rally around these communities, do the things we need to know that’s safe, tell our young people that protecting their neighbors is a damn noble profession, and that being in there, working hand-in-hand together is a noble profession, and you need to know whether it’s Moorhead, Mankato or here in Minneapolis, it matters everywhere,” Walz said.

Earlier this month, new public safety initiatives were announced for the U of M Twin Cities campus after the school’s police department reported a 45% increase in violent crime around campus this summer since 2019.

As previously reported, plans include a team effort approach using multiple agencies, as well as expanding safety notifications with a pilot program called “Dinkytown Alerts.” The alerts will allow notifications to go out to the greater campus community about crimes such as kidnappings, assaults, robberies, murders and active shooter situations.

Also earlier this month, the Department of Public Safety reported driving while impaired arrests increased more than 10% from last summer to this summer.

In addition, the Minnesota State Patrol announced it will be continuing to crack down on aggressive drivers using its HEAT patrols – short for Highway Enforcement for Aggressive Traffic – for the rest of 2022. The agency reports since the patrols began on Feb. 14, there have been more than 20,000 traffic stops, resulting in 191 arrests.

As previously reported, the state is also investigating two businesses in north Minneapolis, located at the corner of West Broadway and North Lyndale, due to growing concerns about crime and safety.