The two candidates in Minnesota’s 2nd congressional district could only agree on holding one face-to-face debate, but they made sure they used the opportunity to draw sharp contrasts between their two campaigns. They started right from their opening statements.

Kistner fired right back in his opening statement. “Let me just remind Congresswoman Craig who’s actually the voting member in Congress for the 2nd congressional district,” he said. “Because it seems like you’re saying I’m the one voting on half of this when I’m the one suffering from the last two years of your voting record.”

For the record, according to the website opensecrets.org, Kistner has received $23,195 from oil and gas interests, but has nothing listed from the pharmaceutical industry. However, they might be contributors to political action committees that donated to Kistner. As for Craig, the website lists $108,974 from the “pharmaceuticals/health products” industry and nothing from oil and gas interests. Overall, as of the reporting period through July Craig had raised more than twice as much money as Kistner, $5.2 million to $2.1 million. New fundraising figures are coming in this week.

The two candidates were also asked about the causes of inflation and possible solutions. Kistner blamed much of the problem on big government spending by congressional Democrats and President Joe Biden. “So I just have to ask you one simple question this entire debate,” Kistner said. “Can we survive another two years under the failed leadership of President Biden and Congresswoman Craig?” 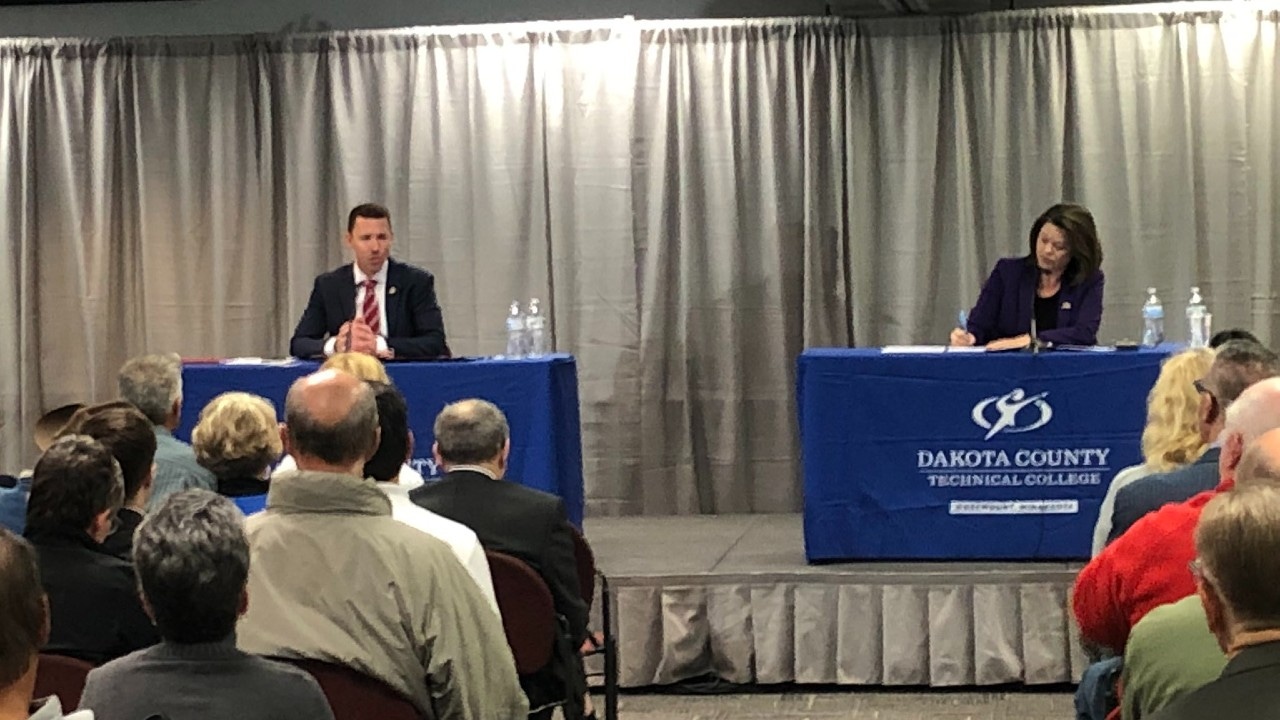 Kistner says one solution is for the U.S. to invest more in domestic energy and manufacturing to keep gas prices down and reduce the cost of other products.

Craig agreed there should be more domestic energy investment as part of an “all of the above” strategy along with renewable energy. However, she also defended government spending and the “Inflation Reduction Act” passed by Democrats she said helped Minnesota businesses and will reduce the federal deficit.

“The question I would ask you all, what of that spending…would you not have done?” Craig asked the crowd watching the debate at the Dakota County Technical College. “One-point-seven billion dollars went to save businesses in the 2nd District of Minnesota.”

In one of the sharpest exchanges, Craig touted her work on lowering prescription drug prices and questioned whether Kistner would ever stand up to pharmaceutical companies. “What you didn’t say in your answer Mr. Kistner is that you would be willing to stand up to big pharma because I don’t believe you would be,” she said after Kistner addressed the issue. He offered a pointed response. “Absolutely I would stand up to all big pharma, all big business, because what matters most is people like me, the middle class. I don’t live in a mansion like you do Congresswoman Craig. I live in a townhome with my wife and two kids. I know exactly what everyone in this audience is struggling with and going through and that’s exactly who I’m going to stand up for.”

One area they did agree on his questioning President Biden’s decision to forgive billions of dollars in student debt.

“Look what Biden just did,” Kistner said. “He just forgave $400 billion worth of student loan debt and that’s just something I can’t go for.”  Craig says she, too, has questions about the president essentially spending tax dollars by forgiving debt without a vote in Congress. “Education, we should be investing in it, but I’m not so sure about Joe Biden’s plan either, to be candid.”

The last question was about the abortion issue that has dominated the TV ad campaigns on the Democratic side. Craig and groups supporting her have run ads claiming Kistner supports a ban on abortion even in cases of rape, incest or to save the life of a mother. He says he has never held that position.

“I’m pro-life with the exception of rape, incest and health of the mother, but this issue should be left to the states,” he said during the debate. In Craig’s response, she did not repeat the claim against Kistner that repeatedly airs on television ads. “I will always trust a woman and her family to make this decision more than a politician,” she said.

After the debate, reporters pressed her on the claim she makes about Kistner’s position and she couldn’t cite any specific evidence he ever held the position of opposing abortion in cases of rape, incest or to save the life of a mother. She says it’s implied in his support for letting state’s decide on their own abortion laws because some states have outlawed all abortions.

“He is, in fact, by doing nothing, allowing states to ban abortion even in the case of rape and incest and life of the mother,” she said.

Kistner said after the debate his position on abortion has never changed. “I will never do anything to jeopardize women’s health rights, but when it comes to abortion I’m pro-life with the exception of rape, incest and (to protect) the life of the mother.”

The debate was sponsored by the Dakota County Chamber of Commerce and is the only scheduled debate in a race that is among the most closely watched in the country. It’s a rematch of 2020 when Craig beat Kistner by just two percentage points. A third candidate in the race, Paula Overby of the Legal Marijuana Now party, died recently, but her name will remain on the ballot. In an odd twist, a candidate from the same party died just before the 2020 election and still received nearly six percent support, or nearly 25,000 votes.

The race has been the subject of multiple television ads, which have been put to the 5 EYEWITNESS NEWS “Truth Test.” A graph showing how those ads are graded can be found at the bottom of this article.

As previously reported, a televised political ad that attacks Kistner for his record on abortion has a primary theme of Kistner opposing all abortions, including in cases of rape, incest and when the life of the mother is in danger. However, the 5 EYEWITNESS NEWS “Truth Test” committee gave that ad a failing grade.

Another ad targeted Craig for voting in favor of the American Rescue Plan bill in 2021. The ad also says “millions got chipped in to fancy golf courses and luxury resorts.” An Associated Press investigative report from March 2022 showed $140 million going to a publicly owned luxury hotel in Florida and $6.6 million for irrigation projects on two Colorado golf courses. There is also money for a ski slope in Iowa, a minor league ballpark in New York and several other economic development projects funded through the bill.

Another ad that targets Craig discusses the economy, and states “she was warned that big government spending could overheat the economy…but Angie Craig didn’t listen.” Although the ad makes several true claims, they require some context. Many economists, like Larry Summers, a former treasury secretary under President Clinton and former economic advisor to President Barack Obama, called the American Rescue Plan “ambitious” but with “big risks” for inflation. Summers wrote a column for the Washington Post in February 2021, a month before Congress passed the $1.9 trillion bill and President Biden signed it into law in March 2021.

Before last week, the race also included candidate Paula Overby, who represented the Legal Marijuana Now Party. Last Wednesday, Overby’s family said she had died from a heart failure at the age of 68. It was the second time in two campaigns the party’s candidate for the district had died just a month out from the election.