Politicians react to invasion of Ukraine

Politicians at all levels have begun reacting to the news of Russia starting its attack on Ukraine.

Thursday, cities and bases in Ukraine were hit with airstrikes or shelling, and Ukraine’s government said Russian tanks and troops were spotted crossing the border.

Klobuchar was among a group of bipartisan U.S. Senators who traveled to Ukraine in January to meet with the country’s leaders, including Ukrainian President Volodymyr Zelenskyy, the Minister of Defense, the Minister of Foreign Affairs and others.

“Weakness tempts tyrants and totalitarians to seek more power. People who only want to live in peace suffer the consequences. Ultimately, there is only one group of people responsible for the tragedies unfolding – Vladimir Putin and his cronies. They have stolen wealth from the Russian people, destabilized and done great harm to their European neighbors, and now they’ve crossed another line that will yield untold horrors. Europe must act with strength and resolve to prevent risking a wider conflict, and the U.S. must support our NATO allies and freedom loving people in this moment of extreme peril.”

Johnson is a member of the Senate’s Foreign Relations Committee, but was not among the senators who traveled to Ukraine last month.

“Russia’s invasion of a peaceful Ukraine is an act of unprovoked military aggression that must be condemned. The Biden administration, with the bipartisan support of Congress and our NATO and European allies, will respond in a united and decisive manner. The strongest possible sanctions must be imposed on Russian financial institutions, oligarchs, and political leaders by the U.S. and the international community. The world must make Vladimir Putin understand in explicit, unequivocal terms that his actions will have severe consequences. Having met with world leaders, allies, and parliamentarians many times during my service in Congress, never before have I witnessed such a unified stance like the one our democratic allies showed at the Munich Security Conference in response to Putin’s aggression. He will not divide us. My prayers are with the Ukrainian people and their struggle for freedom.”

“I condemn in the strongest possible terms Vladimir Putin’s reckless, illegal invasion of Ukraine. My thoughts are with the Ukrainian civilians who have already suffered immensely and are again suffering the brunt of this terrible conflict. We must continue to support diplomacy even as it becomes more difficult – though it is becoming harder to imagine, this could still escalate to something much more devastating. 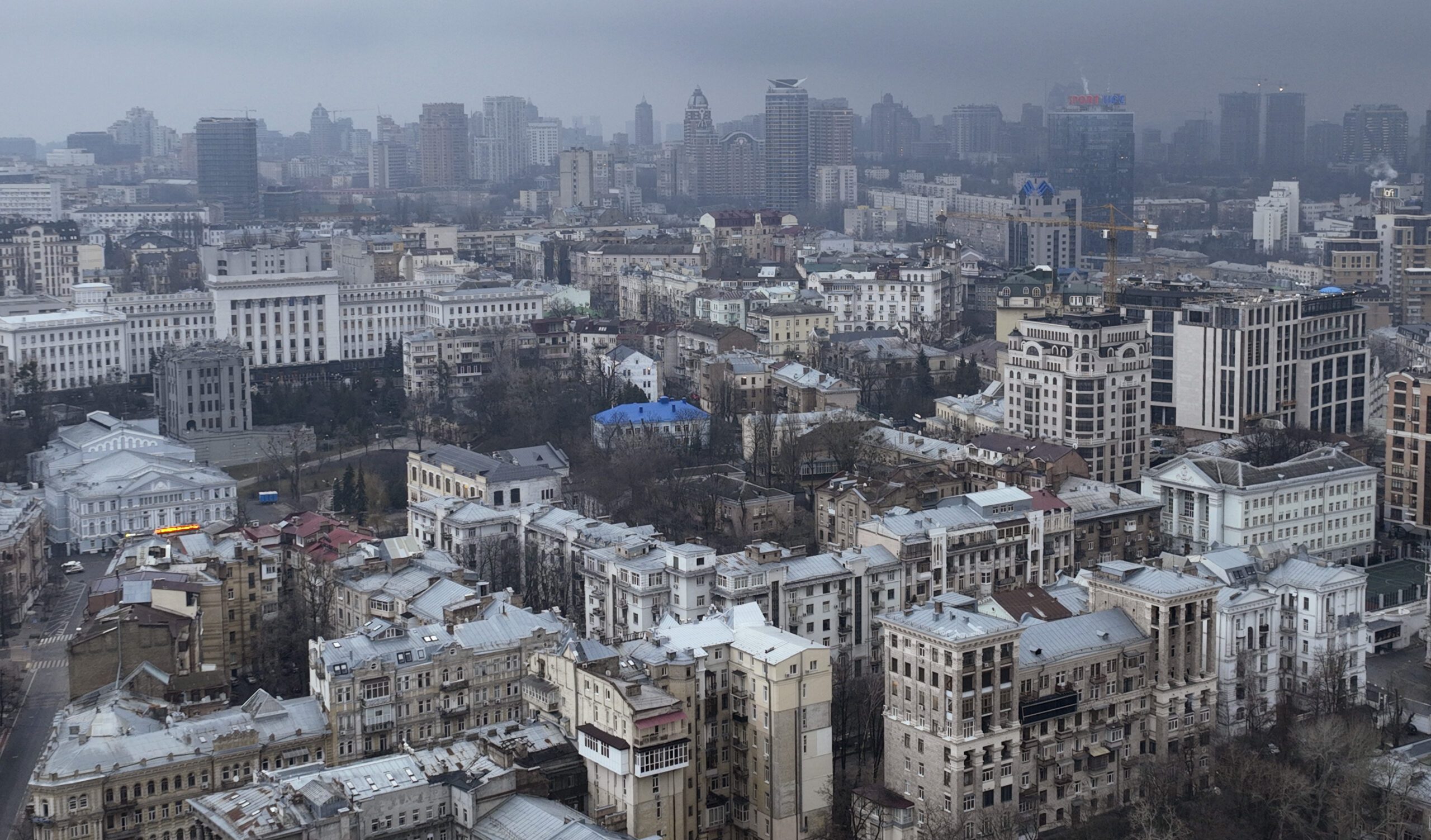 This photo shows a view of the city of Kyiv, Ukraine, Thursday, Feb. 24, 2022. Russian President Vladimir Putin on Thursday announced a military operation in Ukraine and warned other countries that any attempt to interfere with the Russian action would lead to "consequences you have never seen." (AP Photo/Emilio Morenatti)

“I support sanctions that are targeted at Putin, his oligarchs, and the Russian military, including and especially targeted at their offshore assets. But I will continue to oppose broad-based sanctions that would amount to collective punishment of a Russian population that did not choose this. I am heartened that the Biden Administration has included humanitarian exemptions and general licenses to the first tranche of sanctions, but I am also aware that exemptions and licenses have never been sufficient to prevent indiscriminate human suffering.

“Finally, we must direct some of the unity and resolve that we and our partners have shown in this crisis toward the civilians that are in harm’s way. This includes making allowances for humanitarian organizations to operate in sanctioned territory, and it also includes preparing to welcome the likely influx of refugees fleeing the conflict. As always, the countries immediately bordering Ukraine will face the greatest burden. The United States should lead by example, and begin to resettle refugees here as soon as it becomes necessary.”

The Minnesota DFL Party Veterans Caucus is also speaking about the attack, and issued this statement:

Russia has undeniably moved against Ukraine by declaring independent states within the Donbas region. The DFL Veterans Caucus continues to monitor the precarious situation in Ukraine carefully and with concern. We support the Administration’s close coordination with our NATO Allies, partners in Europe, and countries around the world in attempts to deescalate Russia’s blatant aggression against a sovereign nation. We support the first tranche of sanctions to impose costs on Russia in response to their actions this past week and we encourage additional tough sanctions if Russia continues to escalate the situation. We further fully support the Commander in Chief’s additional deployment of U.S. forces and equipment already stationed in Europe to strengthen our Baltic Allies — Estonia, Latvia, and Lithuania, as defensive moves in support of Article 5 of NATO. President Biden is correct to point out that we have no intention of fighting Russia, but believe it is important to send an unmistakable message that the United States, together with our Allies, will defend every inch of NATO territory and abide by the commitments we made to NATO. Russia’s actions are a provocation and assault on sovereign Ukrainian territory and this so-called naming of independent republics is a clear violation of international law. Only Ukraine and Ukrainian citizens have the right to determine their fate. The Veterans Caucus hopes Russian leadership will cease their aggression and avert war. As veterans, we understand the cost of war and hope the worst-case scenario can be avoided. We fully support our Troops deployed throughout Europe and worldwide, and applaud the Minnesota Congressional Delegation, including Senator Amy Klobuchar and Representative Betty McCollum, who worked tirelessly at the Munich Security Conference to find solutions to this challenging and dangerous situation.

Meanwhile, President Joe Biden participated in a virtual G7 Leaders’ meeting in the Situation Room at 8 a.m. CT to discuss the situation in Ukraine. He also spoke at the White House early Thursday afternoon, and announced sanctions against Russia by the United States, as well as other NATO members.

EXPLAINER: Just how hard could US sanctions hit Russia?

For now, the president has held off imposing some of the most severe sanctions, including cutting Russia out of the SWIFT payment system, which allows for the transfers of money from bank to bank around the globe, or Russia’s energy sector.

Biden released the following statement Wednesday night regarding the situation in Ukraine:

“President Zelenskyy reached out to me tonight and we just finished speaking. I condemned this unprovoked and unjustified attack by Russian military forces. I briefed him on the steps we are taking to rally international condemnation, including tonight at the United Nations Security Council. He asked me to call on the leaders of the world to speak out clearly against President Putin’s flagrant aggression, and to stand with the people of Ukraine. Tomorrow, I will be meeting with the Leaders of the G7, and the United States and our Allies and partners will be imposing severe sanctions on Russia. We will continue to provide support and assistance to Ukraine and the Ukrainian people.”

The Ukrainian government also said it had lost control of Chernobyl, the scene of the world’s worst nuclear disaster.

CLICK HERE for the latest updates on the invasion.