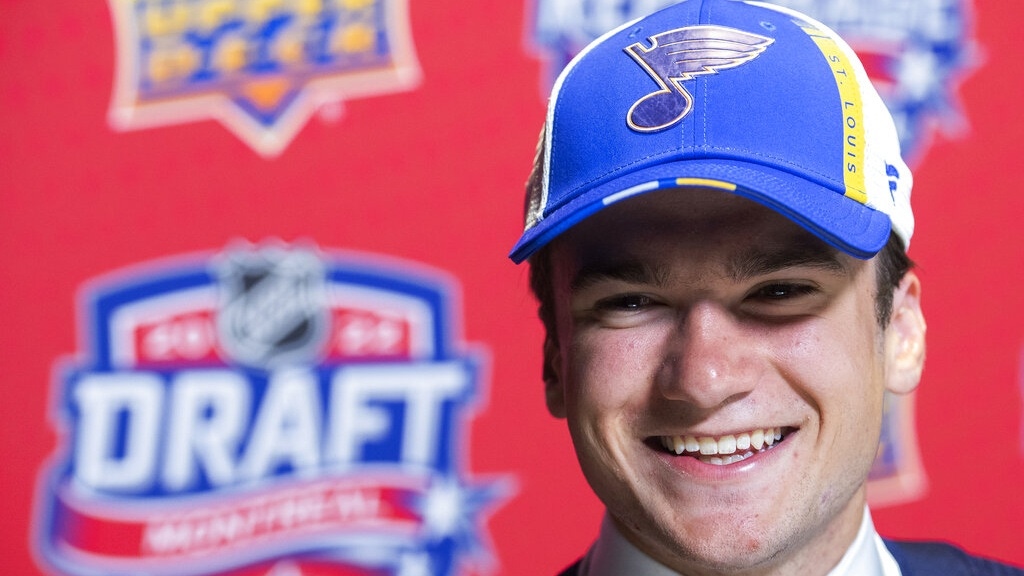 Jimmy Snuggerud speaks during a news conference after being selected by the St. Louis Blues during the first round of the NHL hockey draft in Montreal on Thursday, July 7, 2022. (Graham Hughes/The Canadian Press via AP)

When the Arizona Coyotes selected Pennsylvania-native Logan Cooley with the third overall pick in the 2022 NHL Draft, it made him the second-earliest Gopher hockey player ever drafted – and the first of four players with local ties to be selected in the first round.

Cooley, a center, will be a freshman at the “U” this coming season. Initially committed to Penn State, Cooley flipped to the Gophers last winter.

Only Erik Johnson, the #1 overall pick in the 2006 NFL Draft, has ever been an earlier draft pick among Gopher hockey players.

Snuggerud, whose father Dave is a Gopher hockey alumnus, has been playing with the USA Hockey National Team Development Program since leaving Chaska High after the 2019-20 season. He’ll skate for the Gophers this winter.

Rinzel just completed his junior year at Chaska. While he has another year of high school eligibility, it’s expected he’ll play junior hockey for Waterloo of the USHL in 2022-23 before enrolling at the “U” for the 2023-24 season.

Howard spent part of his high school time at Shattuck-St. Mary’s in Faribault before moving to Ann Arbor where he skated with Cooley and Snuggerud in the USNTDP the last two years.

Howard was the leading scorer on the USA Hockey Under-18 team that won silver at the World U-18 Championship in April. Cooley and Snuggerud also skated on the team.

Howard will begin playing for Minnesota-Duluth this winter.

Cooley, Snuggerud and Howard have all been invited to USA Hockey’s tryout camp for the forthcoming World Junior Championships. Originally scheduled for January, they were postponed to August due to a COVID-19 outbreak.

In all, ten Minnesota-natives were taken in the 2022 NHL Draft.