It was the first and so far only debate on the schedule in the 2022 Minnesota governor’s race and the differences between Walz and Jensen were as stark as expected.

Walz started by touting his economic accomplishments, including a record 1.8% unemployment rate.

“We not only have the lowest unemployment rate of any state in history, we have the second highest job participation rates,” Walz said in a packed pole barn. “We have the highest credit rating for state agencies and the fifth largest job growth.”

Jensen said those statistics are misleading.

“If you got the biggest raise you’ve had in three years at 5% and you’re falling behind because inflation is 9.1%, then frankly the 1.8% doesn’t really matter. That’s a false metric, and you folks see through that.” 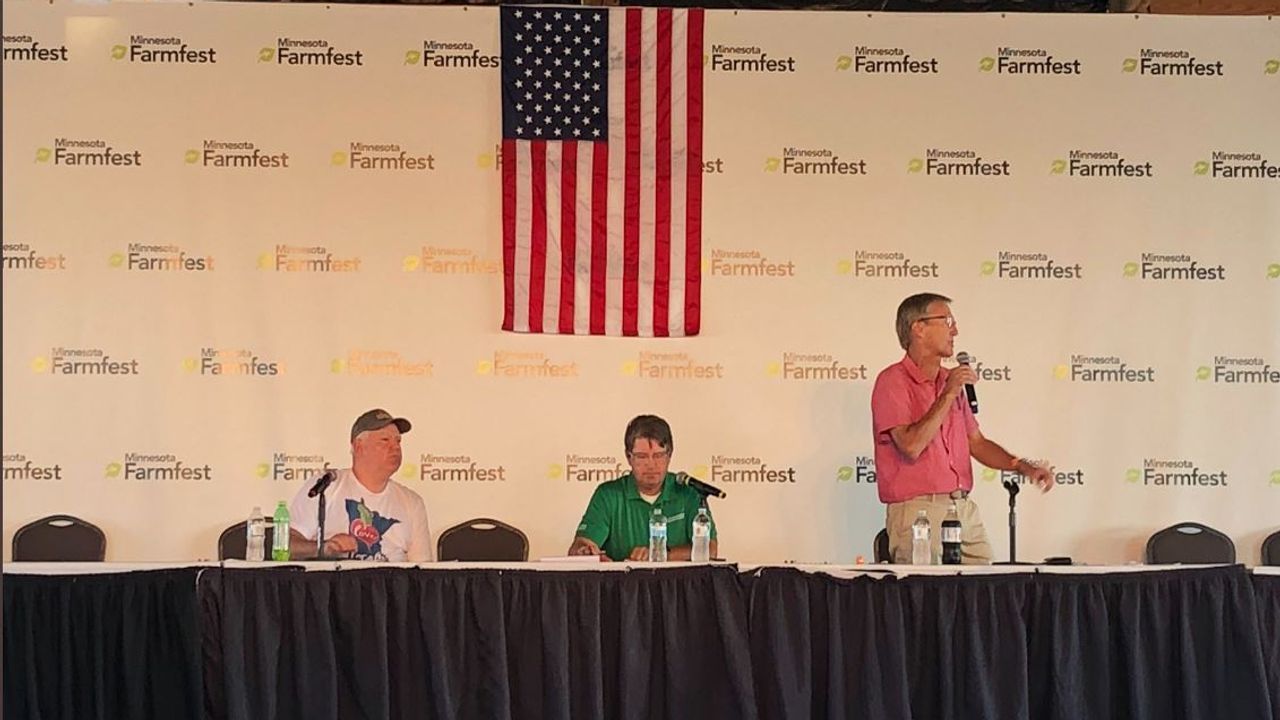 Walz chided Jensen for urging Senate Republicans to block the passage of a major budget bill last legislative session and stand in the way of one key way the state could help Minnesotans fight inflation.

“The elimination of the Social Security tax is in there and the largest tax cut since 1858,” the governor said. “Scott [Jensen] asked Republicans to step away so it would look like it did not get done. That’s what’s broken about government.”

Jensen didn’t directly respond to that, but he did say government isn’t usually the answer to most economic problems.

”Let farmers farm, miners mine, let teachers teach and let government get the hell out of the way,” he said to cheers from his supporters.

On the issue of biofuels like ethanol, the two candidates agreed it’s an important part of the Minnesota economy. However, Jensen questioned support for the industry by Walz considering his support for a California-style mandate for cleaner cars and a certain number of electric vehicles.

“We continue to make sure we invest in biofuels,” Walz said. “We make sure our transportation system is diversified, and biofuels are a key piece of it. We’re only scratching the surface of what we can do.”

To which Jensen immediately responded by saying he’s confused by the Walz position. “If biofuels are our future of Minnesota then why did Gov. Walz hook our wagon to be a California copycat?”

There were no direct questions about public safety during the nearly 80-minute debate, but Jensen brought the issue up during his closing statement saying we need “more cops on the street.” He criticized Walz for letting the 3rd Precinct in Minneapolis burn down and said he would not have waited to call in the Minnesota National Guard.

“There is a poison of lawlessness that is bleeding out all across Minnesota, and we know this is a problem,” Jensen said. “We’ve got to enforce the law.”

Playing off an earlier question about how each candidate thinks the Minnesota Vikings will do this year, Walz said Jensen is so good at second-guessing if he’d been coach of the Vikings instead of Bud Grant the team would have won four Super Bowls.

“Having served 24 years in the National Guard that’s a lot more experience than watching ‘Top Gun: Maverick’ and second-guessing where our men and women are putting themselves at risk,” Walz said, looking directly at Jensen. “That’s a lot bigger difference.”

There were no questions during the debate about abortion even though that is expected to be a big issue in the governor’s race. Neither candidate brought the issue up even though the Walz campaign and DFL Party have been sharply critical of recent comments about abortion from both Jensen and his running mate Matt Birk.

The two candidates are certain to debate again before the November election, but so far the two campaigns have not agreed to specific dates or places for those debates.

The gubernatorial debate was one of many candidate forums happening at Farmfest. A complete list of events can be found by clicking here.