Ukraine invasion: What to know as Russian forces target Kyiv 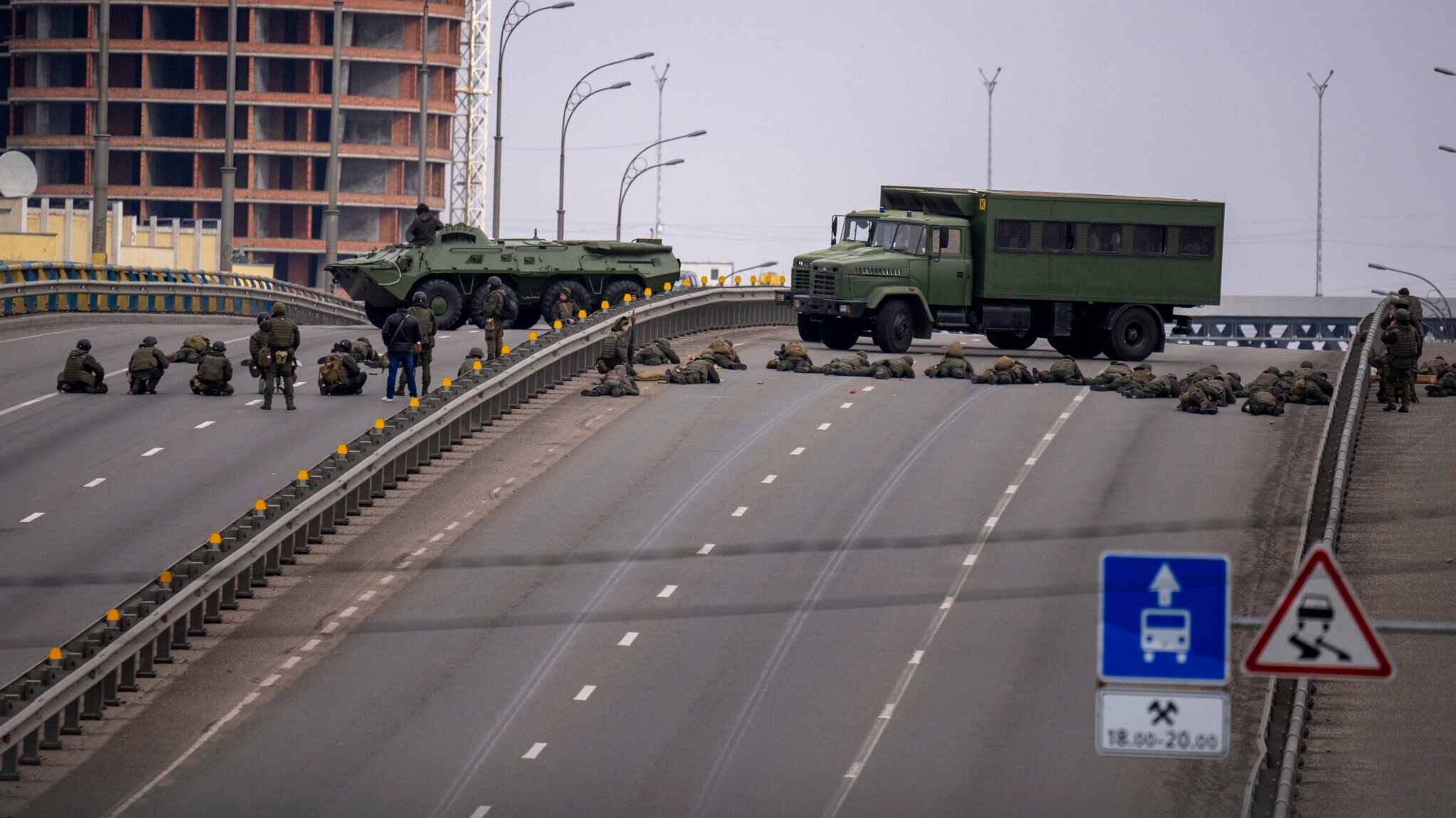 Ukrainian soldiers take position on a bridge inside the city of Kyiv, Ukraine, Friday, Feb. 25, 2022. Russia pressed its invasion of Ukraine to the outskirts of the capital Friday after unleashing airstrikes on cities and military bases and sending in troops and tanks from three sides in an attack that could rewrite the global post-Cold War security order. (AP Photo/Emilio Morenatti)

Invading Russian forces closed in on Ukraine’s capital Friday, in an apparent encircling movement after a barrage of airstrikes on cities and military bases around the country.

Ukrainian President Volodymyr Zelenskyy told somber European Union leaders in a video link-up from his bunker late Thursday that it may be the last time they see him alive.

Pre-dawn explosions rocked Kyiv, and gunfire was reported in parts of the city, while Ukraine’s military said a group of Russian spies and saboteurs was seen on the capital’s outskirts. Police told people not to exit a central subway station because of gunfire.

The assault, anticipated for weeks by the West, amounts to Europe’s largest ground conflict since World War II. It could also portend the emergence of a new “Iron Curtain” between the West and Russia, with global repercussions.

Zelenskyy appealed for defense assistance and tougher sanctions on Russia. U.S. President Joe Biden was to meet Friday with fellow NATO leaders during a virtual summit.

Here are the things to know about the conflict and the security crisis in former Soviet-dominated Eastern Europe:

Hopes for a negotiated end to the war dimmed on Friday after a tentative deal to discuss Zelenskyy’s offer to designate Ukraine a non-aligned country appeared to break down over the proposed venue for the talks.

The Kremlin had said President Vladimir Putin was ready to send a delegation to Belarus for talks to discuss the proposal that suggests Zelenskyy would be willing to negotiate dropping his country’s bid to join NATO.

But Kremlin spokesman Dmitry Peskov said Ukrainian officials reversed course and said they were unwilling to travel to Minsk for talks, proposing Warsaw as a venue instead. He said they then cut off communication.

Before the invasion, the West had rejected Russia’s demand to keep Ukraine out of NATO. Putin used the refusal to justify the invasion, claiming that the West left him no other choice.

TURNING THE SCREWS ON RUSSIA

With a military intervention in Ukraine off the table, and countries around the world looking to heap more financial punishment on Moscow, the United States, Britain and European Union said Friday they will move to sanction Russian President Vladimir Putin and Foreign Minister Sergey Lavrov.

The EU’s unanimous decision, part of a broader sanctions package, indicated that Western powers are moving toward unprecedented measures to try to force Putin to stop the brutal invasion of Russia’s neighbor and from unleashing a major war in Europe. British Prime Minister Boris Johnson also told NATO leaders during a call Friday that Britain would move to impose sanctions against Putin and Lavrov. The EU said it would move to freeze Putin’s assets.

White House press secretary Jen Psaki indicated the U.S. sanctions will include a travel ban. President Joe Biden, who had previously said sanctions targeting Putin were under consideration, decided to make the move in the last 24 hours after talks with European leaders.

Psaki said the move is intended to send “a clear message about the strength of the opposition to the actions” by the West against President Putin.

Waking to the second day of Russia’s invasion, horrified civilians found themselves at risk as artillery shells rained down on some residential buildings on Kyiv’s outskirts.

Russia has said it is not targeting cities, but the fighting would seem to belie that. The body of a soldier lay on the ground near a Kyiv underpass. Elsewhere, fragments of a downed aircraft lay amid a residential area’s brick homes with black plastic covering body parts found nearby.

Ravina Shamdasani, a spokeswoman for the U.N. High Commissioner for Human Rights, says its staffers have so far verified at least 127 civilian casualties — 25 killed and 102 injured — mostly from shelling and airstrikes.

A spokeswoman for the U.N. refugee agency, Shabia Mantoo, said more than 100,000 people were believed to have left their homes in Ukraine and that “up to 4 million people may flee to other countries if the situation escalates.”

Thousands of Ukrainians crossed Friday into neighboring countries to the west in search of safety from the unfolding war in their country.

With men of military age banned from leaving the country, most of those who crossed borders were women, children and the elderly.

One woman from Kyiv who arrived in Przemsyl, Poland described how men were pulled off trains in Ukraine before they got to the border.

Cars were backed up for several miles at some border crossings as authorities in Poland, Slovakia, Hungary, Romania and Moldova mobilized to receive them, providing shelter, food and legal help. These countries also eased their usual border procedures, including COVID-19 testing requirements.

The pope broke protocol with an in-person visit Friday to the Russian embassy to “express his concern about the war” in Ukraine.

Pope Francis’ extraordinary gesture was viewed as a sign of his anger at Russia’s actions, and his willingness to make a personal appeal for the end of hostilities.

The pope travelled to and from the Russian embassy in a small white car with Vatican officials saying they knew of no such previous papal initiative.

Reviving Cold War fears of a nuclear showdown, Putin has warned in a speech that he has the weapons available if anyone dares to use military means to try to stop his takeover of Ukraine.

Whether an empty threat or not, Putin’s words re-animated the specter of nuclear war — through accident or miscalculation.

The Russian president said in a speech early Thursday that despite “losing a considerable part of its capabilities after the fall of the Soviet Union,” Russia remains “one of the most powerful nuclear states” and has “a certain advantage in several cutting-edge weapons.”

SPORTING WORLD TURNS ITS BACK

Russia has been stripped of hosting the Champions League final by UEFA w ith St. Petersburg replaced by Paris, and Formula One dropped this season’s Russian Grand Prix at Sochi.

The showpiece final in the European men’s football season will still be held on May 28 but at the 80,000-seat Stade de France.

It followed discussions led by UEFA President Aleksander Ceferin that involved the European Commission and Macron.

The F1 race wasn’t due until September but the motorsport series leadership decided it would be “impossible” to stage it there after talks with teams and the FIA governing body.