MNA files intent to strike; 15,000 nurses could walk off job

Leaders of the Minnesota Nurses Association (MNA) say they are now filing their intent to strike.

Filing an intent to strike gives hospitals a 10-day strike notice before nurses could walk off the job.

The MNA represents 15,000 nurses across several hospitals in the state, including the Twin Cities and the Duluth, Minn. and Superior, Wis. areas.

Following the announcement, Essentia says it “joined other Minnesota health systems in filing an unfair labor practice charge with the National Labor Relations Board (NLRB),” saying MNA failed to provide a required notice. Allina said it wasn’t part of filing the unfair labor charge and Twin Cities Hospitals Group hasn’t yet responded to a request for comment.

If the strike does happen, union leaders say it would be the largest private sector nurses’ strike in the nation’s history. They add it would also be the first strike where nurses from both the Twin Ports and Twin Cities regions participated in together in contract negotiations. 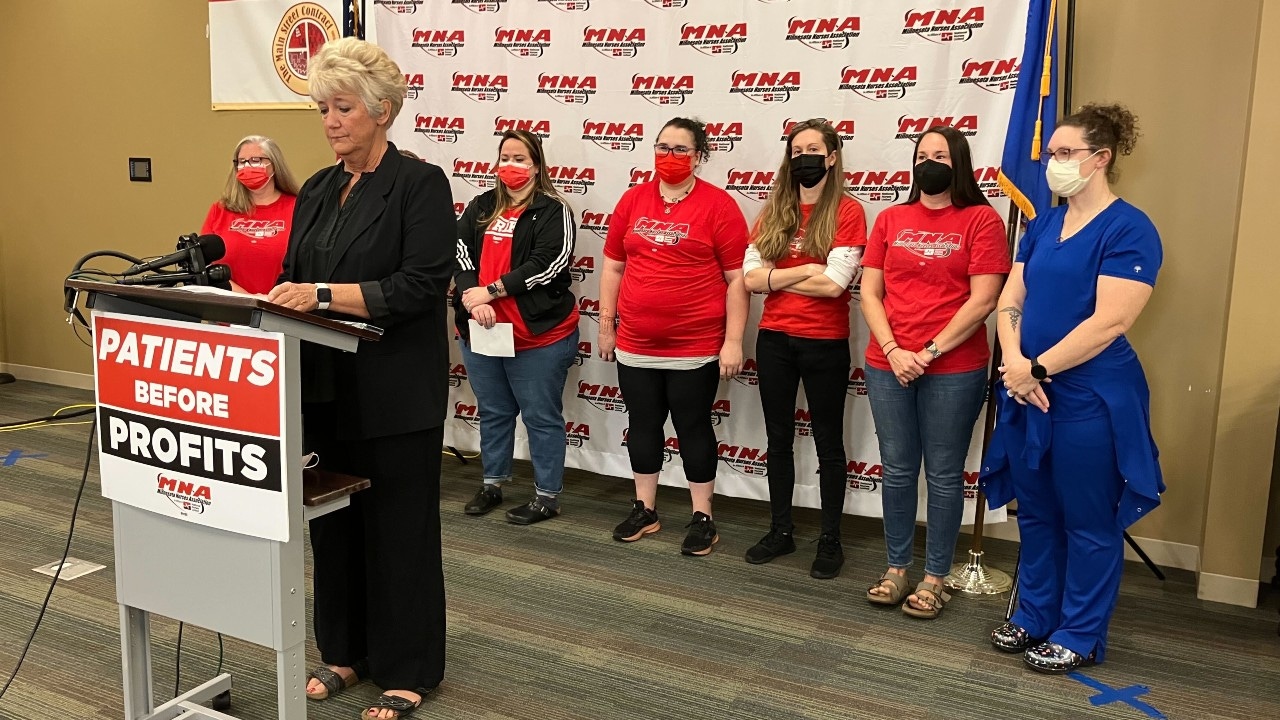 MNA leaders say if an agreement isn’t reached between negotiators, nurses plan to strike at 16 hospitals in the Twin Cities, Twin Ports and Moose Lake for three days starting Sept. 12.

According to the MNA, the potential strike would affect the following hospitals:

“I anticipate the time we’re going to spend at the table should increase exponentially,” said Mary Turner, President of the Minnesota Nurses Association. “They need to see it as the crisis that it is – we said over and over that this isn’t something we do lightly, but we’re not going to just sit back and do nothing. We can’t.”

Negotiations have been going on since March. Nurses are asking for added safety measures, better benefits and pay increases as well as more staffing.

A nurse at North Memorial said wait times were 14 hours over the past weekend, and recently, no nurses were scheduled for three days in Duluth.

Hospital staff will now have 11 days to figure out how a strike would have an effect on patient care, and who will fill in.

Thursday, healthcare providers across the region reacted to the MNA’s decision of filing an intent to strike. Their statements can be found below:

“We are disappointed the union is choosing to rush to a strike before exhausting all options, like engaging a mediator in negotiations which they have repeatedly rejected. The union’s premature decision to move forward with a work stoppage is not Allina Health’s desired outcome of our negotiations. We made progress this week at the negotiating table and a strike only serves to keep our valued nurses from working alongside our care team to deliver needed patient care.

Throughout negotiations, Allina Health has offered an economic package that includes a wage increase of 11% over the three years of the contract, additional compensation benefits, and a commitment to other priority issues, such as diversity, equity and inclusion, workplace safety and recruitment and retention. The union is still at an unsustainable 31% wage increase over three years, which is not feasible as we look long-term at our responsibility to all employees and our commitment to being a sustainable asset to the communities we serve.

We know agreement on important issues for both parties is possible, and it is our preference to get back to the bargaining table with the help of a mediator. However, a work stoppage does not change our commitment to providing safe and reliable care to our communities and we have plans in place to continue providing care throughout the duration of the work stoppage.“

“We are disappointed the nurses’ union today has rushed into an intent to strike notification and refuses to exhaust all available means to avoid potential disruption to patient care including our repeated offers of an outside mediator. Mediation was successfully used in previous contract talks and we believe it represents a practical way to bring focus and clarity to the negotiations. We encourage the nurses’ union and its supporters to focus on the pathways we’ve successfully used in the past.

We understand the past two years have been hard on everyone in health care. Our care teams all worked exceptionally hard to care for patients and care for each other. Today, our non-profit hospitals continue to recover financially from the COVID-19 pandemic and the changes the pandemic brought to the workforce and our community. Despite the financial challenges to our hospitals, we are proud to have offered our nurses the largest wage increases in 15 years while agreeing to keep nurses’ benefits unchanged for the life of the contract. The nurses’ union continued demands for wage increases of more than 30 percent remain unreasonable, unrealistic and unaffordable.

It is important for the public to note: our hospitals are open and will remain open to serve the community. We will continue our efforts at the negotiating table to reach reasonable agreements and avoid any actions that would interrupt patient care. We assume the union will do the same. We remain committed to serving our community and keeping our focus on the patients we serve.”

INITIAL REPORT 7a.m.: Thursday, leaders of the union which represents 15,000 nurses across several hospitals in the state – with many in the Twin Cities and the Twin Ports regions – are expected to announce their next steps after voting to authorize a strike last month.

Leaders of the Minnesota Nurses Association say their members have been working without a contract for months.

According to the union, the vote held in August to strike passed overwhelmingly, meaning the union now just has to give hospitals a 10-day strike notice before nurses could walk off the job, and that notice could happen at any time.

The strike authorization came after months of failed negotiations, a picket in June and a recent vote of “no confidence” in hospital leadership.

Union leaders often point to the higher salaries of hospital CEO’s, and most recently, said their biggest issues are staffing shortages and burnout.

“It is time to put patient care at the bedside before the bottom line of our CEOs won’t do it, we will,” said Mary Turner, President of the MNA.

Following the strike vote held in August, Allina Health – just one of the hospital systems which could be impacted – issued this statement in response:

“While we are disappointed the union is choosing to move to authorize a strike, our priority is providing high quality care to the community. We are hopeful we will begin to see progress at the bargaining table, and avoid possible work stoppages that do not benefit anyone.”

No nurses have walked off the job, and no hospital services have been impacted as of Thursday morning.

The announcement from the MNA is expected to happen around 8:30.