Informational picket being held by nurses in Hastings

“Patients over profits” will be the chant used by nurses in Hastings and Duluth Tuesday morning.

A picket line made up of members from the Minnesota Nurses Association (MNA) is at Allina’s Regina Hospital in Hastings.

Nurses won’t be walking off the job Tuesday, as the picketing is informational. Hospital operations won’t be affected by Tuesday’s event. 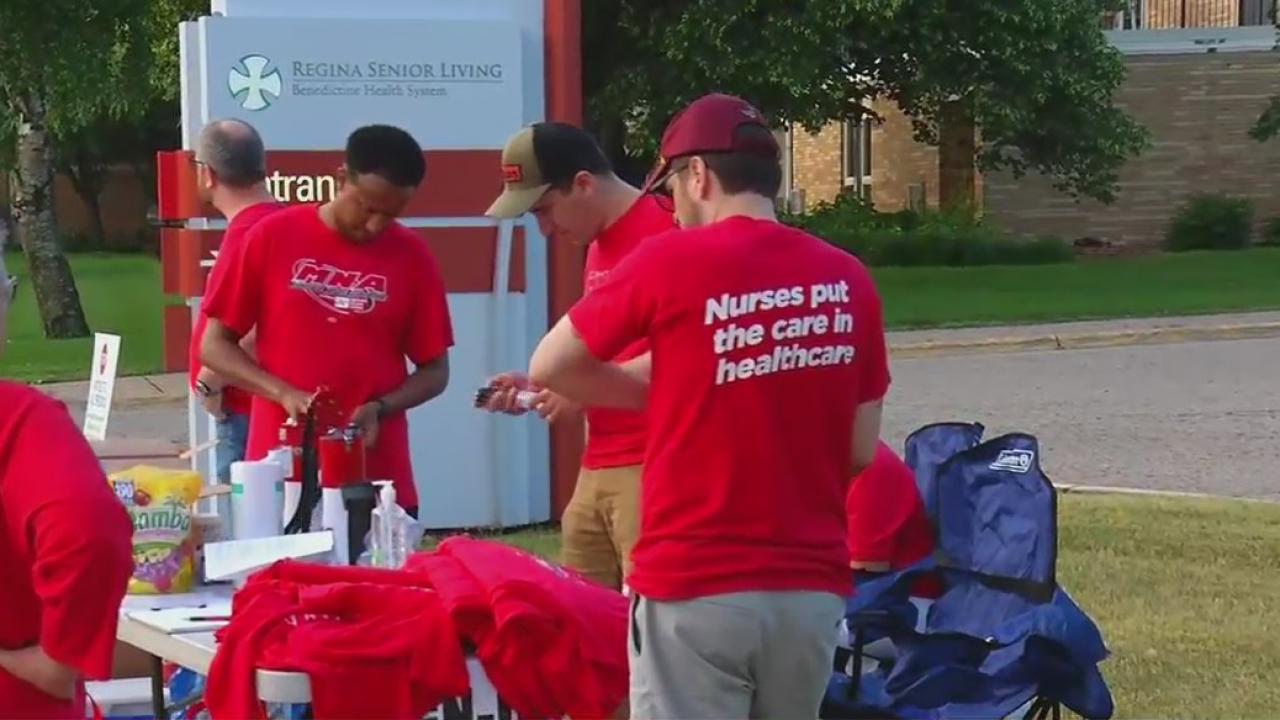 “It’s difficult for all hospitals to function with what they have because the retention is not there,” said Lisa Sandford, a pediatric intensive care nurse at Children’s Minnesota.

In addition, they want to see changes in their new contracts that would help retain nurses, such as wage increases.

“I really want us to be able to stay here and serve our community to our best and our best isn’t happening any more, and it’s partially because we’re worn out and partially because we don’t have the staff that we need,” said Mary McAlpin, a Registered Nurse at Regina Hospital.

Regina nurses have been bargaining with Allina since April, and their current contracts expired on June 1.

“All the things that need to be fixed to be able to keep nurses at the bedside because they’re leaving the bedside in record numbers,” said Mary Turner of the Minnesota Nurses Association.

During the past month, pickets have happened at other Allina hospitals. Workers are asking for items such as no more than three 12-hour shifts in a row, block scheduling so they can know in advance what days of the week they will be off, and the creation of staffing committees – which include nurses – to deal with safety concerns such as not being able to take breaks.

Allina issued the below statement to 5 EYEWITNESS NEWS earlier this month:

Allina Health recognizes the Minnesota Nurses Association’s right to conduct informational picketing during contract negotiations. Since April, we have met with the union to reach an agreement that recognizes the contributions of our employees, while prioritizing the health needs of our community and the challenges facing our industry.

Allina Health has agreed to match the metro hospital wage increases when those are negotiated and reached a tentative agreement on hours of work provisions and we continue to work to find common ground around contract changes that address the union’s other priority issues.

Beyond offering compensation enhancements, we have demonstrated our shared commitment to important issues like diversity, equity and inclusion, as well as safety and security concerns.

Allina Health looks forward to getting back to the bargaining table and bringing these negotiations to a productive end.

Editor’s Note: This article has been updated to correct a statement that was attributed to Allina but was actually made by Twin Cities Hospital Group. Allina’s correct statement has since been added.