Former Brooklyn Center officer Kimberly Potter has been sentenced to two years (24 months) in prison in connection to the death of Daunte Wright. She will have to serve two-thirds (16 months) of that in prison before being eligible for supervised release, and she received credit for 58 days already served.

Potter was convicted of first-degree manslaughter in December after fatally shooting Wright during an April 11, 2021 traffic stop.

RELATED: Kim Potter guilty on both counts in death of Daunte Wright

“His life counted, his life mattered,” Minnesota Assistant Attorney General Matthew Frank said before Potter’s sentence was handed down Friday morning. “And that life was taken. And the law recognizes the severity of the loss of life when setting criminal penalties.”

Prosecutors pushed for the presumptive sentence, which is just over seven years, after initially seeking an upward departure. Potter’s attorneys, citing her good record, asked for probation. 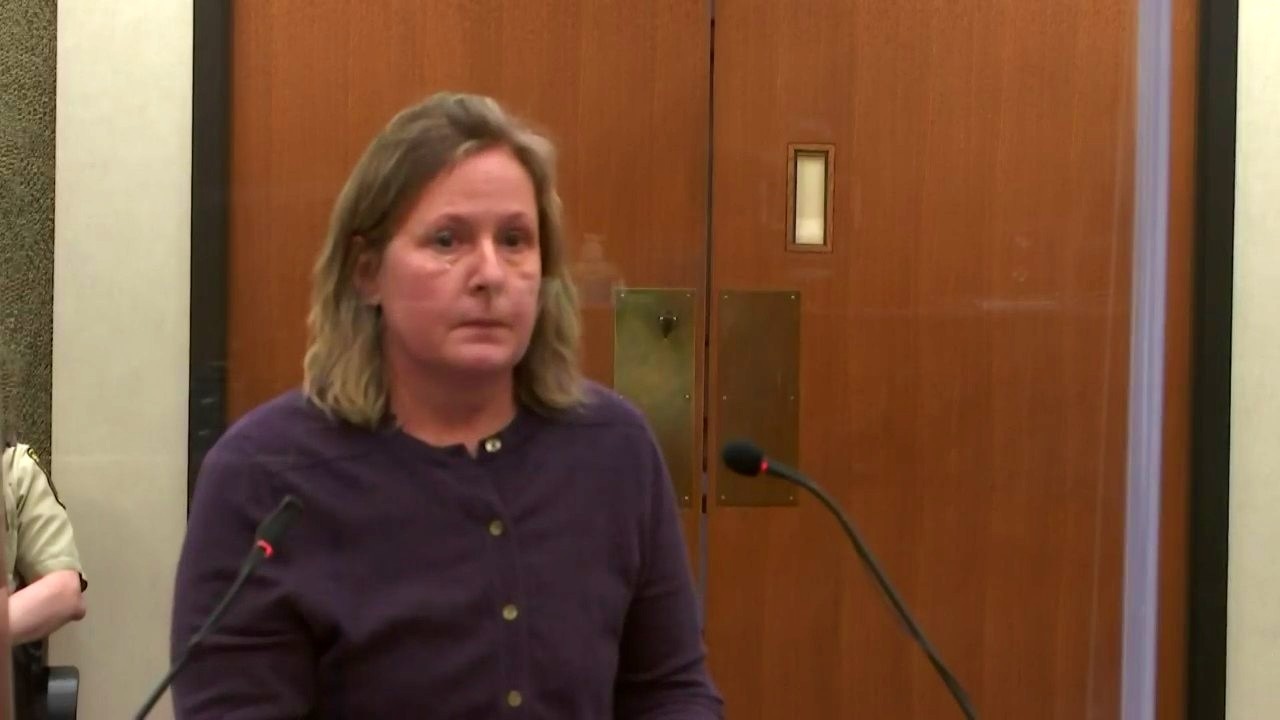 Former Brooklyn Center police officer Kimberly Potter prepares to give her statement before she's sentenced on Friday, Feb. 18, 2022, for manslaughter in the death of Daunte Wright.

Katie Wright, Daunte’s mother, spoke before the sentence, asking Judge Regina Chu “to hold the defendant to the highest accountability.”

“April 11 was the worst day of my life. A police officer who is supposed to serve and protect someone took so much away from us,” she said through tears, adding, “I’ll never be able to forgive you for what you’ve stolen from us.”

Arbuey Wright, Daunte’s father, also called for Potter to receive the highest sentence while calling that incomparable to the loss he and his family suffered. Damik Bryant, the oldest of Daunte’s siblings, read a poem for Daunte; Diamond Wright, Daunte’s second-youngest sister, called him “a great big brother” while highlighting things Daunte will miss; and Chyna Whitaker, the mother of Daunte’s son, noted the impact of Daunte’s death on their son, saying, “Kim Potter took my son’s best friend away from him, and nothing has been the same since.” Whitaker also highlighted the impact on herself, saying she has “extreme anxiety” when she’s pulled over and can’t watch TV or movies with police in them. They all called for Potter to receive the highest sentence possible.

Potter mostly listened to the victim impact statements with her head down.

Paul Engh, one of Potter’s attorneys, noted a probationary report determined Potter would be amenable to probation and called her actions “a mistake.” He highlighted Potter’s good record, noted she’ll never be a police officer again or have a gun and said she poses no risk to the public by being on probation. Engh also held up a large box full of cards Potter has received from the community, even reading a couple of them, to show the support she’s received and called it “unheard of” for a defendant to receive such support.

In his 45-minute speech, Engh said Potter is happy to speak at presentations around the state about weapons confusion, said being isolated at the women’s prison in Shakopee is impacting her physical and mental health, and cited Wright’s “aggressive” behavior and the warrant for his arrest as mitigating factors.

He also said authorities work to help many defendants and suggested to the court, “maybe it’s time to reach out to someone like her and say, ‘What can we do for you?'”

“To the family of Daunte Wright, I’m so sorry that I brought the death of your son, father, brother, uncle, grandson, nephew and the rest of your family,” Potter said in an emotional statement asking for forgiveness before her sentencing.

Before handing down the sentence, Chu said she was moved by everyone’s statements and then noted Potter’s track record. She said she got “hundreds” of letters in support of Potter. Chu said she felt compelled to address the aggravating factors, saying the state didn’t prove a reason for a higher-than-normal sentence for Potter.

“This has been an extremely difficult decision,” Chu said, noting she looked at the purposes of incarceration in making her decision. Being Wright was killed due to Potter’s actions, “there rightfully should be some accountability,” Chu said.

Ultimately, Chu said she determined a downward departure from the presumptive sentence, citing Potter’s conduct and intention as less severe than typical manslaughter, the tense and quickly evolving situation the shooting happened in, and the fact Potter was working to arrest Wright. She also specifically cited differences in the case vs. the Mohamed Noor and Derek Chauvin cases.

After reading the sentence, Chu said she knows some will disagree with her sentence but said it doesn’t diminish Wright’s life. “His life mattered,” she said. She also appeared emotional, holding back tears and said of Potter, “she didn’t mean to hurt anyone” and her conduct called for a lower sentence.

After the sentencing hearing, Wright’s family and attorneys expressed frustration and disappointment.

Whitaker’s attorney, Thomas Bowers, said, “you might as well just let her walk free if you’re going to give somebody two years for taking a life.”

“They are very, very disappointed. They feel very disappointed because they believe there was no reason to have such consideration for the killer of their child,” Wright family attorney Ben Crump said.

“We saw Derek Chauvin get convicted, we saw Kim Potter get convicted, and so I think we all allowed ourselves to believe, a little bit, for a moment, that there could be an equal justice system for our Black and other communities of color citizens,” Wright family attorney Jeff Storms added.

“I feel cheated, I feel hurt … It’s just sad to say that I feel like we were tricked,” Arbuey Wright added.