Kim Potter guilty on both counts in death of Daunte Wright

Potter shot and killed Wright, a 20-year-old Black man, during a traffic stop on April 11. Wright was pulled over because of expired license plate tabs, and officers discovered Wright had a warrant out for his arrest once they ran his name in the system.

While Potter was trying to put Wright in handcuffs, body camera footage shows Wright trying to get back in his car. At that point, Potter drew her firearm, pointed it at Wright and shot once. 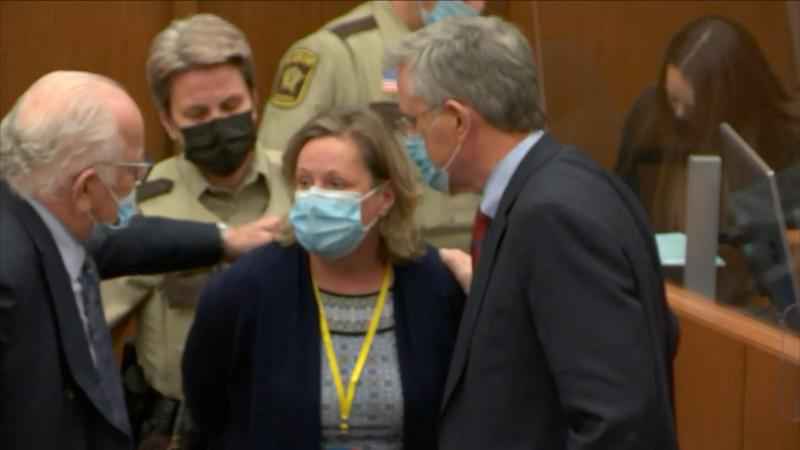 Former Brooklyn Center police officer Kim Potter is put in handcuffs Thursday, Dec. 23, 2021, after a jury found her guilty of first- and second-degree manslaughter in the shooting death of Daunte Wright.[Court TV]

Potter claims she had meant to draw her Taser but instead drew her handgun by accident, and during the video she is heard yelling, "Taser, Taser, Taser!" before pulling the trigger.

Under Minnesota sentencing guidelines, Potter faces a presumptive sentence of seven years in prison. However, the prosecution indicated in court it would seek an upward sentencing departure based on aggravating factors: the crash Wright was involved in after the shooting and the accusation that Potter abused a position of authority.

Potter’s defense attorneys, Earl Gray and Paul Engh, petitioned Chu to let Potter be let out on bail until her sentencing on Feb. 18. Chu denied that request and ordered Potter to be held without bail, saying she "cannot treat this case any differently than any other case."

Both of Potter’s attorneys were seen putting their arms around Potter as the verdict was read.

While there was little reaction heard from Potter’s family while the verdicts were read, one of her family members could be heard yelling out "I love you, Kim!" as she stood up and was handcuffed.

Judge Chu took a moment after reading the verdict to thank the jurors for their service.

"Members of the jury, when we first came into the courtroom, I told you that the jurors are the heroes of the judicial system," she said. "Well, the 12 of you are heroes in this case."

She also praised their willingness to work through the Christmas holiday to reach a verdict — a possibility that was mentioned in the jury questionnaire and during pretrial questioning.

"I am so proud of you. You should be proud of yourselves," Chu said. "Without civic-minded citizens like you, our system of justice could not function. Thank you for your sacrifices."

Minnesota Department of Corrections records show Potter was taken to the Minnesota women’s prison in Shakopee while she awaits sentencing.