Republican gubernatorial candidate Scott Jensen on Monday called for a special investigation into the handling of the Feeding Our Future fraud case by Gov. Tim Walz’s administration and the resignation of the Minnesota Department of Education commissioner over her handling of the situation.

“So I’m going to ask that we call for a special investigator to give a report by October 17th so that Minnesotans can chew on it and then at the debates on October 18th and 28th we can have a conversation including that topic,” Jensen said at a State Capitol news conference. Later, Jensen added, “It is clear from incontrovertible evidence that Tim Walz and his administration have engaged in a cover-up. Someone’s not telling the truth.”

“When $250 million goes missing in the private world this is a fireable offense,” Birk said at the news conference. Earlier, Republican Senate Majority Leader Jeremy Miller had also called for Mueller’s resignation.

The most recent flare-up in the Feeding Our Future case started on Thursday when Walz claimed a Ramsey County judge ordered the Department of Education to resume making payments to Feeding Our Future despite evidence that fraud might be occurring. 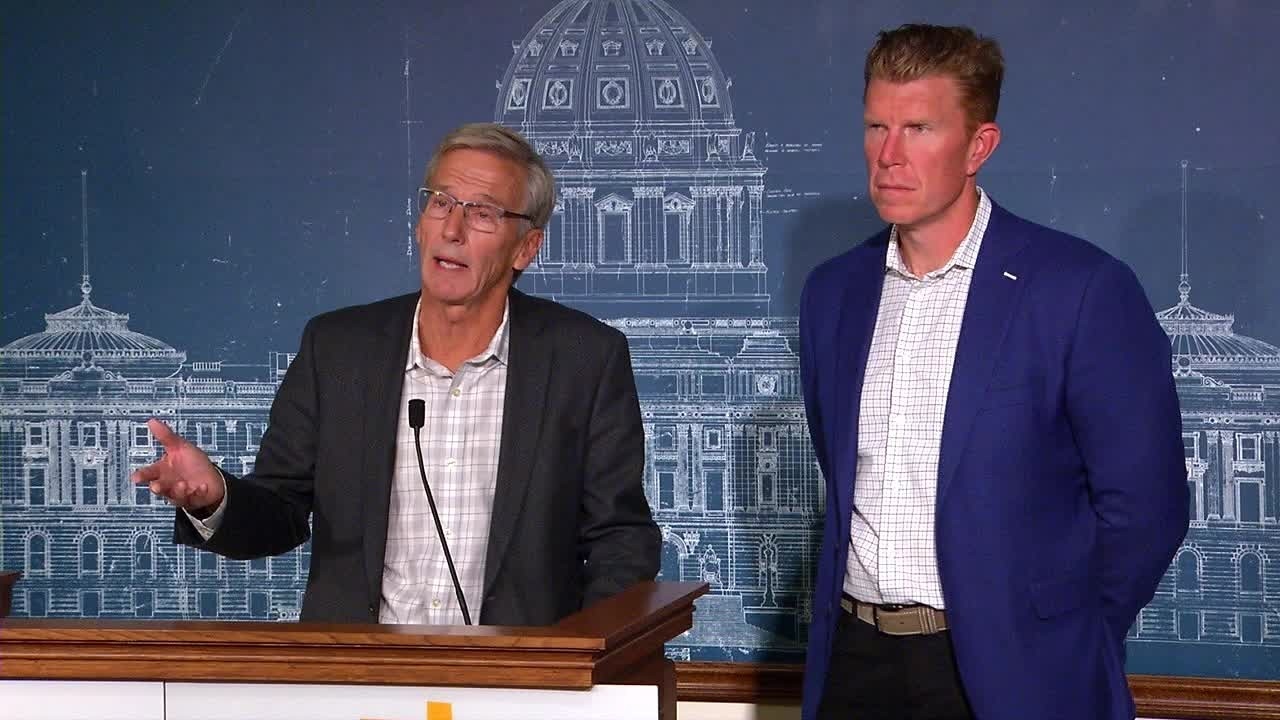 Scott Jensen (left) and Matt Birk, the GOP-endorsed candidates for governor and lieutenant governor, speak at a press conference on Sept. 26, 2022. (KSTP-TV)

“We took the step of stopping payments,” the governor said. “My commissioner was threatened with jail if she did not pay…by contempt of court the judge ruled. We accepted that ruling.”

During the news conference on an unrelated matter Thursday, a reporter asked, “Do you think the judge who ordered your education department to re-start payments should resign?” The governor responded, “I would hope there would be an investigation into that because, just to be candid, and I understand my position here and the separation of powers. We respected the judge’s decision.” Moments later he added about the ruling he believed the judge had issued, “I was speechless. Unbelievable this ruling would come down. Did not really know what to say. Obviously, we had to honor it.”

RELATED: Judge rebukes Walz assertion that he ordered MDE to resume payments to Feeding Our Future

One day later in an extraordinary move, Judge John Guthmann issued a rare rebuke of a governor from the judicial branch, saying, “Due to inaccurate statements by the governor, the Commissioner of Education and the media … .”

Guthmann says Walz had been saying since at least February that his administration had been ordered to resume payments to Feeding Our Future. In his news release on Friday, Guthmann says he “never ordered the Department of Education to resume payments to FOF … .” The judge had not previously said publicly that what Walz was saying and what the media was reporting were inaccurate.

The Walz administration and Department of Education responded on Friday with a 73-page court transcript in which they claim the judge threatened them with contempt of court sanctions if they stopped payments.

Earlier in the day, Republican attorney general candidate Jim Schultz and Republican state auditor candidate Ryan Wilson each asked for their opponents, Democrats Keith Ellison and Julie Blaha, to explain their roles in not stopping the fraud. Ellison’s office on Monday issued a release about its work on the Feeding Our Future case for two years.

When announcing the federal indictments, U.S. Attorney Andrew Luger cited MDE’s involvement “very early on” in the investigation and said he was pleased with MDE’s cooperation.

And an MDE official provided the following statement to 5 EYEWITNESS NEWS:

“MDE blew the whistle on this fraud scheme. They detected it early and worked diligently to stop it.

“MDE repeatedly urged the federal government to investigate and they partnered with the FBI to ensure accountability—even as they fought Feeding Our Future’s sham lawsuit in court. Now, because MDE brought this case to the FBI, 48 people have been charged.”