Attorney General Keith Ellison scheduled four opportunities for the public to weigh in after the healthcare systems announced their proposed union in November. The first session was held in St. Paul at the Department of Revenue.

“At the end of the day, the position the attorney general takes … will be towards our interest in preserving and protecting Minnesotans,” Ellison said.

Fairview currently runs 11 hospitals and employs 31,000 people while Sanford has 47 hospitals and 48,000 employees. If the two healthcare systems merge, the new company will operate out of Sioux Falls.

“COVID has tested the healthcare sector in unprecedented ways, with historic workforce challenges and record inflation,” said James Hereford, the CEO of Fairview Health Services. “The status quo isn’t sustainable. The ongoing challenges and pressure on care delivery demand that we do things different. We believe together we can improve the experience for both patients and providers in a way neither organization can do alone.” 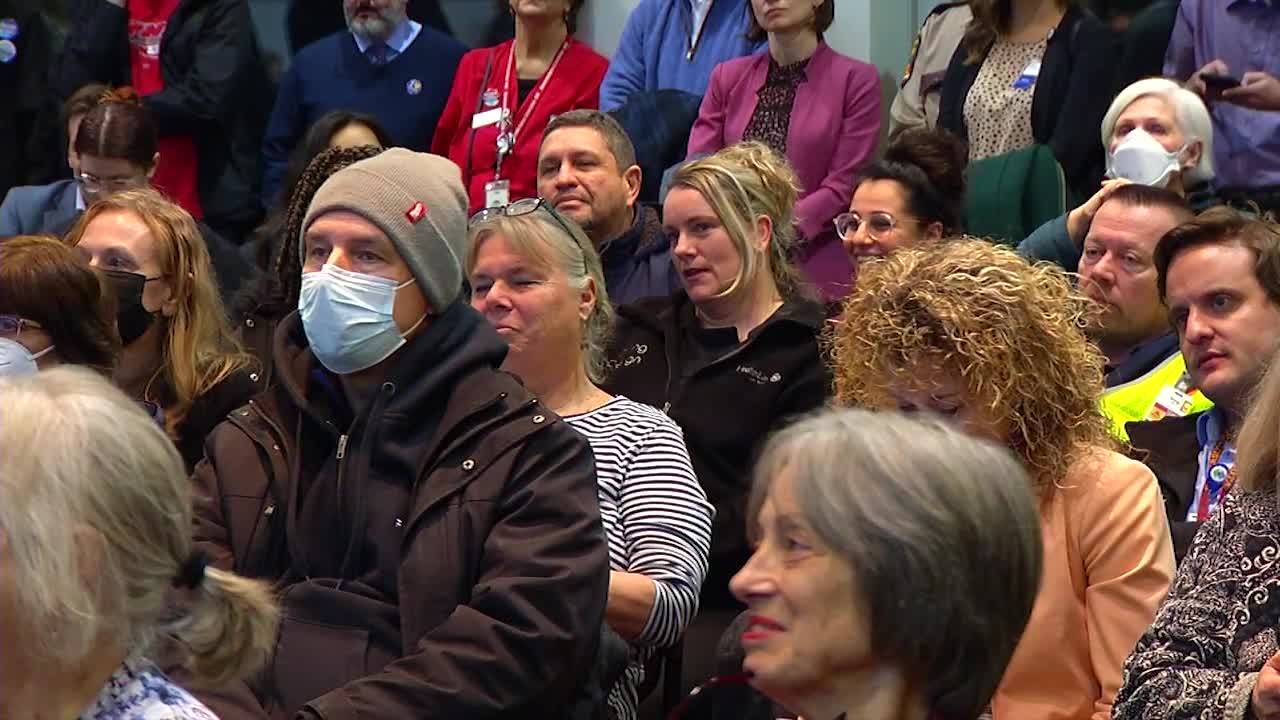 A crowd packs a meeting room Tuesday, Jan. 10, 2023, for the first public hearing on the proposed merger between Sanford Health and Fairview Health Services at the Minnesota Department of Revenue in St. Paul. (KSTP)

“Fairview’s expertise combined with Sanford’s virtual care infrastructure will provide our patients seamless access to cutting edge medicine,” Sanford CEO Bill Gassen said. “Imagine what more we can do together with patients in the Twin Cities and across Minnesota.”

“We call on the attorney general not to approve this merger or otherwise act until there is assurance for the university, our faculty, our patients and the public that any final agreement has been developed with university involvement and any plan is grounded in a vision that will support public health and healthcare access for Minnesota, and it does not divert the public nature of the university flagship hospitals and clinics from their original purpose,” Tolar said.

In a statement, a spokesperson for Fairview told 5 EYEWITNESS NEWS its conversations with the University of Minnesota are ongoing and “our sincere hope is that the University will join us in creating this new, combined system with Sanford. Since August of last year, we have engaged in productive dialogue with the University leadership to explore a mutually beneficial partnership to advance our collective missions.”

Gassen said during the meeting, “As this process continues we are eager to identify how a combined Fairview Sanford system and the University as a separate and independent organization can work together to expand the university’s reach and academic missions.”

All options are on the table, according to Gassen. He said the University of Minnesota will have the option to repurchase the academic medical center from the combined health system if the merger moves forward.

Dozens of community members spoke out against the proposed merger.

“I am here because we don’t want an out-of-state corporation … trying to squeeze profits out of the University of Minnesota Medical School,” said Bernie Burnham, Minnesota AFL-CIO president.

Union members and others also voiced concerns the merger would lead to the closure of facilities, costing jobs and care options.

“We are very concerned about the proposed merger,” NAMI Minnesota Executive Director Sue Abderholden said. “Our main concern is their commitment, or lack of it, to provide quality mental health services.”

The CEOs for both companies previously told 5 EYEWITNESS NEWS they don’t plan to combine or cut staff.

Others who attended the meeting were worried the merger will drive up the cost of care, while others shared concerns the new South Dakota-based company would be influenced by Gov. Kristi Noem’s policies.

“The demand for services is high and increasing, with many providers at or well beyond capacity,” Duran said. “We can’t afford to lose any of them.”

A speaker who identified herself as a Fairview physician who treats high-risk pregnancies said, “I am concerned that we have not gotten a formalized commitment from the Sanford leadership that they will support access to abortion within the Fairview-Sanford system to the ability that is allowed in the State of Minnesota.”

There will be public input sessions in Bemidji, Worthington, and Grand Rapids in the coming weeks. For more information, click here.