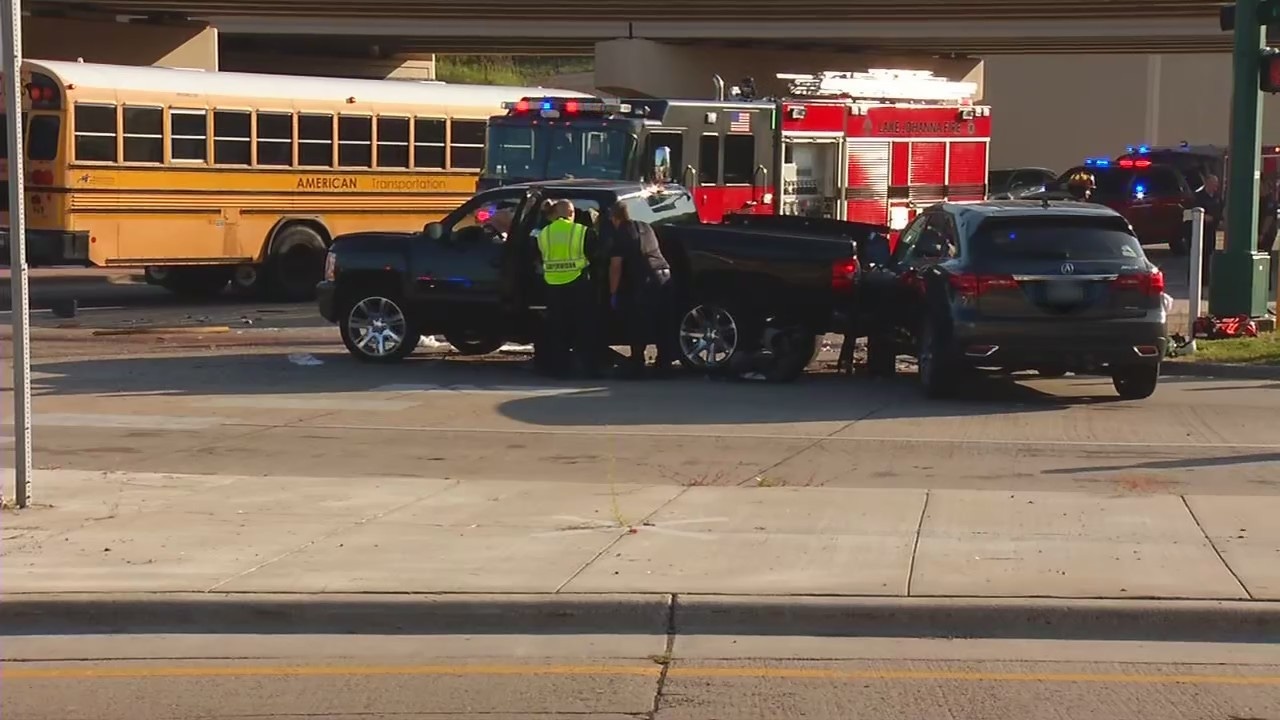 Emergency vehicles were at the scene of a crash in Arden Hills Monday morning. (KSTP-TV)

The sheriff says deputies went to the crash in Arden Hills around 8:30 a.m. and found that a school bus had struck and “badly damaged” a pickup truck from the truck’s passenger side.

Deputies began CPR on the girl, who was not breathing. Allina medics arrived and continued life-saving efforts before taking the girl to Regions Hospital, where she died shortly after.

The other three truck passengers and the bus driver all suffered injuries, for which the teen boy and bus driver were taken to the hospital.

The sheriff says at some point during the incident, a third vehicle was hit by the pickup, but no one in that vehicle was hurt.

The sheriff’s office is working to reconstruct the crash, but early information suggests the bus was traveling east on Highway 96 when it hit the truck, which was turning left onto southbound Highway 10 from the westbound lane of Highway 96.

Neither the bus driver nor the truck’s driver appeared impaired to deputies.

Anyone who was in the area of the crash Monday morning should call investigators at 651-266-7331.

Find an earlier version of this story below.

According to the Ramsey County Sheriff’s Office, there were no students on the bus at the time of the crash, which happened near Highways 10 and 96 around 8:30 a.m.

However, the Sheriff’s Office says four people were injured and taken to the hospital.

The Sheriff’s Office adds some were critically injured, but didn’t provide any other details.

5 EYEWITNESS NEWS will continue to provide updates on this crash as information becomes available.

Monday’s crash was the latest incident to involve a school bus in the metro area.

On Sept. 6, a crash happened between a school bus and a van in Minneapolis at 29th Avenue and 46h Street North.

The following week, a crash involving a school bus happened at the intersection of Germain and East Third streets in St. Paul’s Eastview neighborhood. However, no injuries were reported at the time.