Family of man killed during an exchange of gunfire with St. Paul police call for the release of more bodycam video

WARNING: The video below was released by St. Paul Police and shows a fatal shooting. The images shown may be disturbing to some.

The video captured by a body-worn camera and a dash camera during Monday night’s fatal St. Paul police shooting has been released.

The city publicly released the video Thursday afternoon, a day after community members and family of the man shot by police held a press conference to call for the video’s release.

It also comes a day after the Minnesota Bureau of Criminal Apprehension (BCA) identified the officer who fired his weapon as Sgt. Cody Blanshan, a 10-year law enforcement officer. He has been placed on paid administrative leave.

St. Paul police said officers responded to the area of Earl Street and Hudson Road shortly after 6 p.m. on Monday after receiving reports of a domestic assault. The caller reported that 24-year-old Howard Peter Johnson was armed and fled the scene. 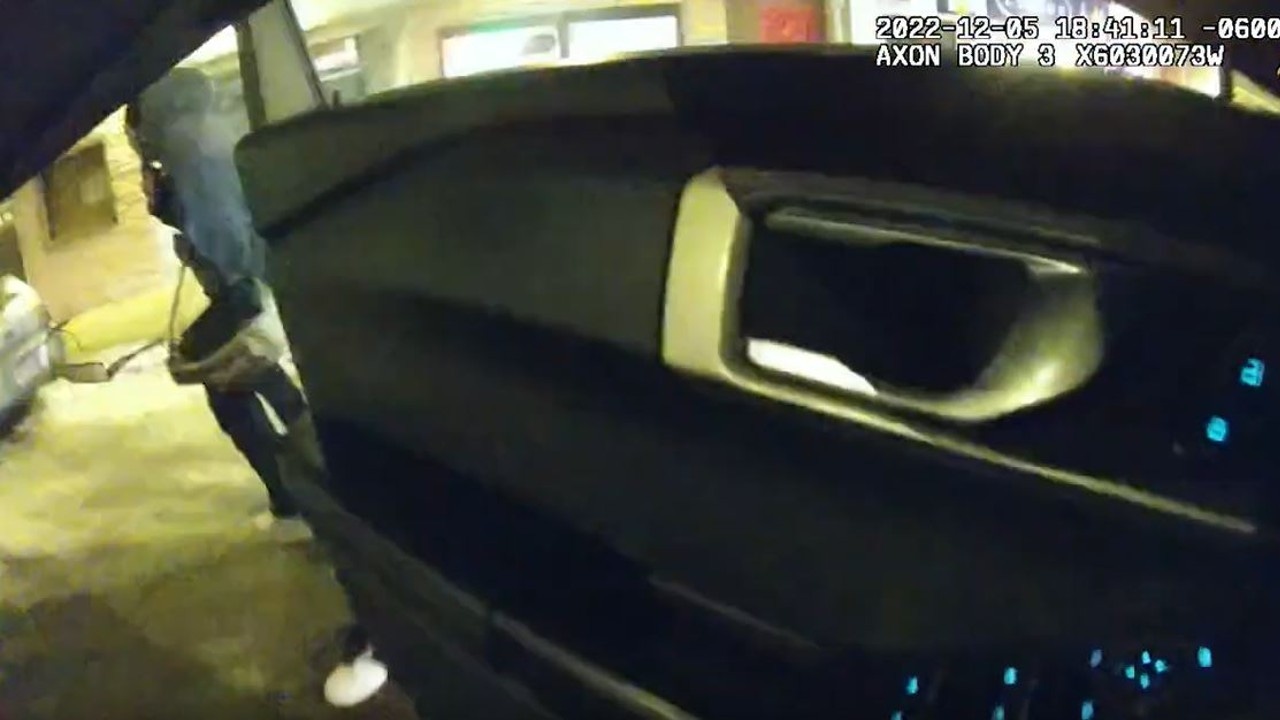 This screenshot of body camera video released by St. Paul Police on Dec. 8, 2022, appears to show Howard Johnson moving away from police while holding a gun as Sgt. Cody Blanshan starts to fire his gun at Johnson. (St. Paul Police Department)

As officers formed a perimeter, the BCA says officers spotted a man matching Johnson’s description who “appeared to be carjacking a victim.”

The video released Thursday doesn’t show the squad hit Johnson and knock him to the ground but shows Blanshan quickly get out of his squad after apparently hitting something. Immediately afterward, Blanshan exits the squad and — right after someone is heard saying, “Don’t do it” — almost immediately begins firing several shots at Johnson, who then falls to the ground.

The video does appear to show Johnson holding a gun.

The video released by St. Paul police includes freeze frames, one of which they say shows a muzzle flash from the weapon they claim Johnson was holding.

In another freeze frame, police say the weapon they claim Johnson used is seen next to him as he’s on the ground.

He says the family wants to see the raw, unedited footage.

Police also released dashcam video from a squad down the street, but St. Paul Police Chief Axel Henry said he does not believe Blanshan’s vehicle was equipped with a one.

“We have limited resources on some of the dashcams there, and that’s an expiring product that we’re refreshing,” Henry says. “I don’t know if that car actually had a camera or was due to get one of the new ones.”

Manning says in that case — that squad vehicle should not have been in service.

He’s calling for all the bodycam footage of officers at the scene to be released.

Johnson was shot in the torso and leg and later died at a hospital. No other injuries were reported.

The BCA says it recovered a .45 caliber Glock pistol and three .45 caliber bullet casings at the scene, as well as 10 casings consistent with the gun Blanshan fired, a 9 mm.

BCA agents are still investigating the shooting and said Wednesday that the officers involved were expected to provide written statements in the coming days. When the BCA finishes its investigation, it will turn its findings over to the Ramsey County Attorney’s Office to review for any potential charges.

A GoFundMe has been started for Johnson’s family.

“Any loss of life is tragic, and we’re keeping the family and friends of Mr. Johnson in our thoughts as they grieve the loss of their loved one,” St. Paul Police Chief Axel Henry said in a statement. “We know there aren’t words to alleviate their pain, but we hope the release of these videos will help begin to answer some of their questions. We extend the same concern to our community members, including our officers, who are also deeply affected by the events that unfolded Monday evening.”

Yesterday — they expressed frustration that city and police leadership had not reached out sooner.

During the press conference Thursday afternoon, Henry and St. Paul Mayor Melvin Carter noted the BCA is still investigating the incident and said they couldn’t comment on much until that investigation is completed.

They did note that Johnson’s family watched the video before it was publicly released.

“We would like to see all the video, including the video from the Sgt.’s car that did the shooting and if there wasn’t a camera on that car then we need to know why that car was allowed to be involved in the situation in the 1st place… We need to see all the footage available clean and unedited. What they showed us has been put together to control the narrative but what we need is the unfiltered truth.”

The mayor also spoke of the importance of trust between police and the community.

5 EYEWITNESS NEWS is working on getting a response from Blanshan’s attorney.

Click the video box below to watch the mayor’s and police chief’s press conference.

Personnel records released by the St. Paul Police Department show that Blanshan was reprimanded on two occasions for causing minor collisions while in a police squad vehicle.

Records also show that Blanshan was promoted to the rank of sergeant in August of 2021 and received two letters of commendation from former Police Chief Todd Axtell in 2017 and 2022.