Chances are, you saw storm damage after waking up Thursday morning if you live anywhere near the Twin Cities metro area.

Powerful storms that activated tornado warnings and sirens moved through the region late Wednesday night, causing damage to much of the area, and thousands were left without power.

A cleanup effort will begin Thursday after wind, rain and hail moved through the metro between 7:30 and 9 p.m. Wednesday. 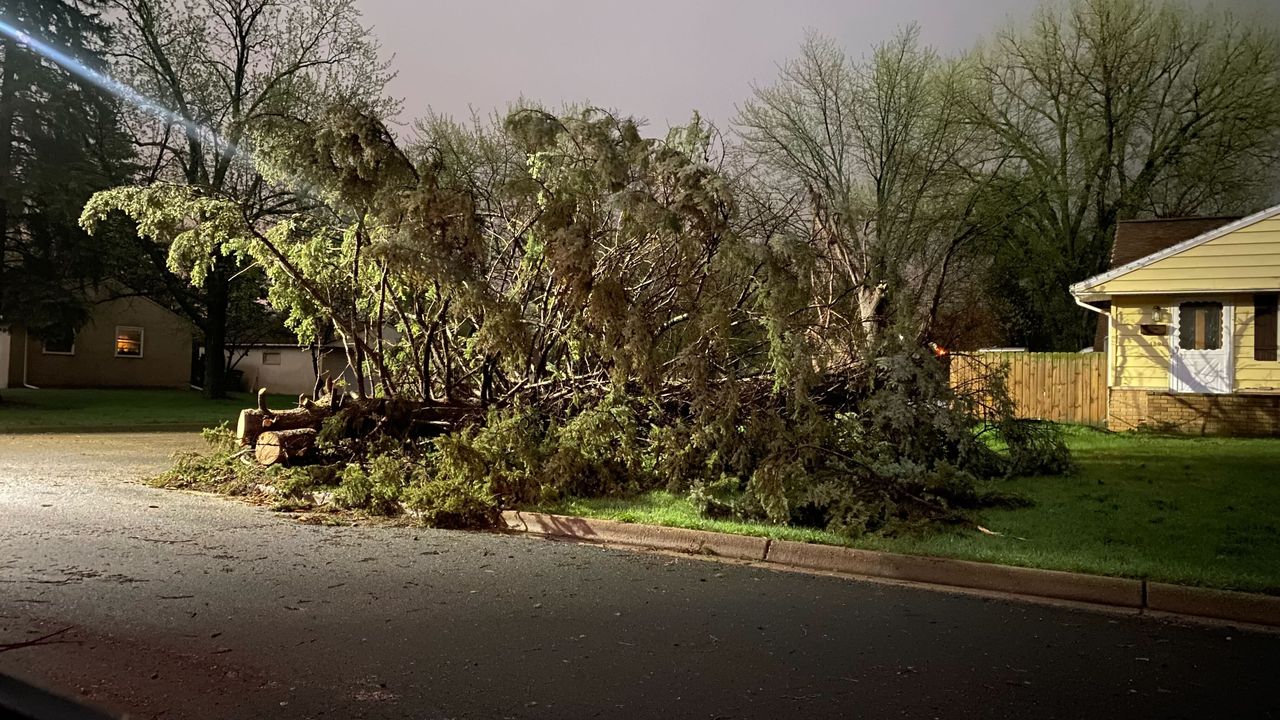 A pine tree in the front yard of a Brooklyn Center home. Credit: KSTP/Jeff Ernewein

Specifically in the metro, a tornado warning was in effect until 9 p.m. for Northeastern Hennepin County, southeastern Anoka County as well as northern Ramsey County shortly before 8:30 p.m. Western Dakota County was also under the warning. The all clear was given for the Twin Cities metro shortly after 9 p.m.

According to the NWS, wind speeds reached 77mph in Shakopee – faster than the posted highway speed limit.

The damage also extended to the southwest portion of the state near New Ulm, where there was a report of a tornado.

According to a Minnesota State Patrol incident report, three vehicles – identified as a Pontiac G6, a Freightliner Cascadia and a Chevrolet Hatchback – were headed east on I-90.

Due to the storm, power lines had fallen over the interstate, and the State Patrol says the Chevrolet stopped to avoid hitting wires. That’s when the Freightliner collided with the Chevrolet, and the Pontiac hit the wires.

According to the Associated Press, one of the individuals in the vehicle said he and the other three weather specialists came to to know each other through professional conferences and courses.

Meanwhile, the State Patrol says the driver of the Pontiac, a 23-year-old South Dakota man, received non-life threatening injuries. The driver of the Freightliner, who was from Canada, was not injured, according to the incident report.

Viewers have submitted photos and videos of the storm system moving through South St. Paul and Apple Valley.

Check back for updates as more damage reports are provided by the National Weather Service.

If you have storm damage you’d like to share with us, CLICK HERE to submit a video or photo. Check out our gallery of viewer submitted photos and videos below.