Powerful storms that activated tornado warnings and sirens moved through the region late Wednesday night, causing damage to much of the area, and thousands were left without power.

A tornado warning is in effect until 10 p.m. for parts of Goodhue, Pepin and Pierce counties. The affected area includes Red Wing, Minnesota, and Bay City, Frontenac and Pepin, Wisconsin.

The line of thunderstorms with damaging potential is now headed east to Wisconsin and southeastern Minnesota. KSTP Meteorologist Matt Serwe says most of the Twin Cities metro is now “in the clear,” but heavy rain is persisting.

Southeastern Blue Earth County and Waseca County are under a tornado warning until 9:15 p.m.

Northeastern Hennepin County, southeastern Anoka County and northern Ramsey County are under a tornado warning until 9 p.m. Blaine, Lino Lakes, Ham Lake, Hugo and Forest Lake could all be affected.

A tornado warning for western Dakota County, including Burnsville, Lakeville, Apple Valley, Rosemount and Farmington, is in effect until 9 p.m.

A thunderstorm warning with destructive winds has been issued for Hennepin County. Residents are advised to get indoors and head to the lowest level of their homes.

A tornado warning has been issued for Le Sueur and Rice counties through 8:15 p.m. A huge line of storms is set to pass through the Twin Cities metro and south along Interstate 35, bringing 70-80 mph winds.

A tornado warning is in effect through 8:15 p.m. for Carver and Hennepin counties west of Interstate 494. The alert area includes Eden Prarie, Minnetonka and Chaska.

A tornado warning has now been issued for most of Scott County and southern Carver County until 8:15 p.m.

A line of storms with 80 mph winds is now approaching Blue Earth, Le Sueur and Nicollet counties. Minnesotans between Mankato and St. Peter are advised to get indoors and away from windows.

As of 7:09 p.m., tornadoes have been reported west of New Ulm and near Buffalo Lake, according to KSTP Meteorologist Matt Serwe.

Tornado warnings are in effect in northern Martin and southeastern Watonwan counties and western Sibley and northwestern Nicollet counties through 7:30 p.m.

A tornado warning for Sibley, McLeod and Renville counties is in effect through 7:45 p.m.

Serwe says residents living on the line from Olivia to New Ulm to St. James are at highest risk of severe weather right now.

Tornado warnings have been issued for Renville, Brown and Watonwan counties through 7:15 p.m.

A tornado watch has been issued for the southern half of Minnesota through midnight. KSTP Meteorologist Wren Clair says severe thunderstorms and a few tornadoes are likely for the central and southern parts of the state.

A tornado warning for Martin County expired at 2 p.m. 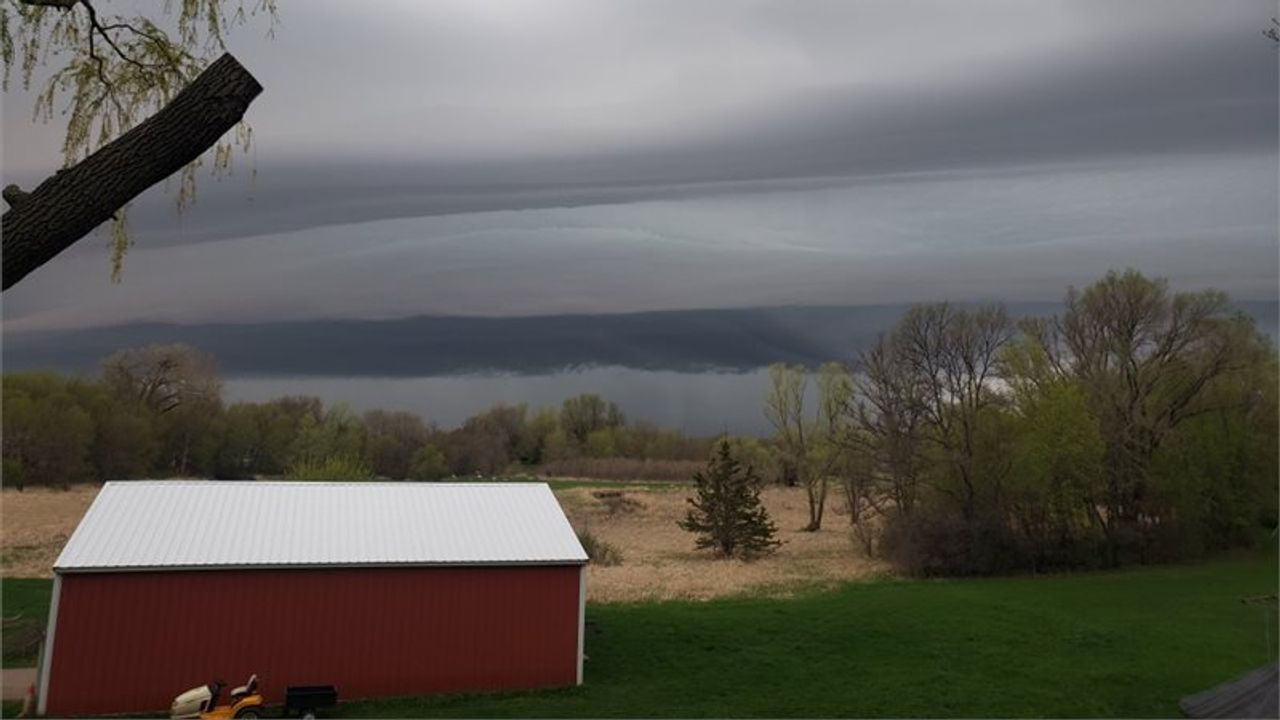 Skies to the south of St. Benedict on the morning of Wednesday, May 11. Credit: Jeff Jensen

The National Weather Service reported hail around one inch in diameter in St. Michael as storms approached the eastern Twin Cities metro at around 1:30 p.m.

Parts of southern Minnesota started Wednesday off with strong storms ahead of hot and humid conditions, as well as a threat for severe weather later in the day.

Around 6 a.m., the National Weather Service (NWS) in the Twin Cities announced a severe thunderstorm warning for the cities of Faribault, Montgomery and Waterville.

The NWS says “numerous” severe storms are possible Wednesday, and at first labeled areas south of U.S. 2 seeing a Slight Risk for severe weather, however, that has since changed to along Highway 2 from Duluth to the North Dakota border.

Previously, areas just north of Mankato and Marshall to the Iowa border were in an Enhanced Risk, however, the NWS Storm Prediction Center has moved that risk level to the north and east, which now covers all of Central Minnesota, including the Twin Cities and far western Wisconsin.

Northern Minnesota has a marginal risk, with areas along the Canadian border seeing generic thunderstorms.

The NWS says the highest risk period will be from 3-9 p.m.

The storms come as warm and humid air is expected to be across the state Wednesday and Thursday, with record high temperatures being in jeopardy. Chief Meteorologist Ken Barlow says highs could rise to near 90 degrees Thursday.

More severe weather is possible Thursday. Make sure to have multiple ways to receive warnings. The latest severe weather watches and warnings can be found by CLICKING HERE.

The 5 EYEWITNESS NEWS Severe Weather guide can be found by CLICKING HERE.

If you’re able to safely take photos and videos of severe weather, you can share them with us by CLICKING HERE.

Meanwhile, the NWS confirmed Tuesday there was tornadic damage just north of Interstate 94 near Rusk, Wisconsin. The NWS reported wind speeds were estimated at 80-90 mph, or a low-end EF1 tornado. NWS radar suggested it occurred at about 7:30 p.m. Monday, along a path about 6 miles long.