Cleanup underway in parts of Minn., Wis. after strong storms

Tornado warnings were issued for several parts of eastern Minnesota and western Wisconsin on Monday.

“It was well over 100 years old, it withstood lots of storms,” Lindsay Spindler, whose family’s barn was brought down by Monday night’s storm. 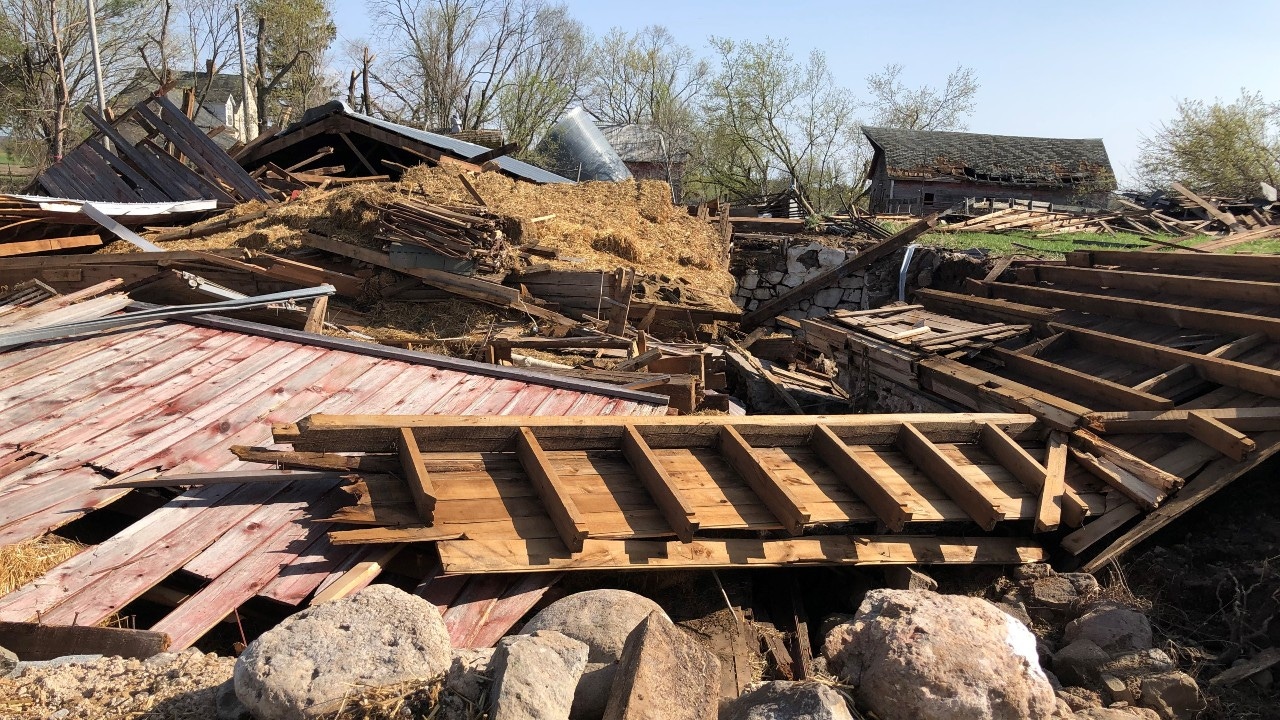 Debris from a barn is left after strong storms blew through St. Croix Falls on May 9, 2022. (KSTP)

Spindler says she couldn’t believe what was left when she came to survey the damage.

“Pulling up to this spot was breathtaking — it was so shocking — unbelievable to see this barn that has been the skyline of our house basically gone,” Spindler said.

Tom Beyl said it seemed like the storm lasted for 45 seconds but found his barn collapsed under the powerful winds.

“I was like, shoot … I’ve got a cow and calf in that barn,” Beyl said. Fortunately, they were OK.

“It was pretty overwhelming, I can’t believe this, it must have been more than a hail storm and wind,” he added.

In addition to damage, the storms also led to downed power lines, knocking out power for many people and businesses.

Bridget Amundson’s laundry business was one of those affected by the power outage.

“I’ve got people who have laundry sitting in washers … I cant’ do anything with,” Amundson said, adding that it’s the first time in her 37 years she’s recalled turning customers away.

According to the emergency management division of the sheriff’s office in Polk County, Wisconsin, crews documented two storm events that caused significant damage to properties.

The National Weather Service (NWS) confirmed Tuesday there was tornadic damage just north of Interstate 94 near Rusk, Wisconsin. The NWS reported wind speeds were estimated at 80-90 mph, or a low-end EF1 tornado. NWS radar suggested it occurred at about 7:30 p.m. Monday, along a path about 6 miles long.

One person suffered injuries not considered to be life-threatening as a result of those storms. Many residents were without power for several hours; power has since been restored, according to Polk County officials.

“Polk County has shown once again how resilient our community is,” Sheriff Brent Waak said in a statement. “It was amazing to watch people chip in and help those who were affected by the storms. It also shows how storms are unpredictable and the need for people to stay prepared for ever-changing weather conditions.”