5 EYEWITNESS NEWS is tracking the effects of heavy snow moving through the metro area. Throughout the day, refresh this page to make sure you are seeing the latest updates. Click here if you are using the KSTP app.

The Minnesota State Patrol reported another 79 crashes across the state between 4 and 9 p.m., including four with injury. There were also 81 spinouts and 16 jackknifed semis.

In total, the State Patrol has recorded 387 crashes since 6 a.m., 38 of which resulted in injuries. A total of 285 vehicle spinouts and 33 jackknifed semis were reported across that 15-hour span.

Authorities say none of the crashes have involved serious injuries.

“District staff are all hands on deck and working to get kids home as quickly and safely as possible,” the district said.

As of 5:40 p.m., the district said there were still buses on the road bringing students home from 4 p.m. dismissal schools.

Pictured below is the principal and staff of The Heights Community School shoveling out a bus that was stuck in the snow.

Most significant snowfall west of I-35 has ended, 5 EYEWITNESS NEWS meteorologist Wren Clair reports, but snow is still in place in the East Metro for the next hour. Driving conditions are still expected to be difficult.

Most of the metro is seeing between 4-6 inches of snow.

Minneapolis-St. Paul International Airport has re-opened its first runway. Runways had been closed for around two hours.

National Weather Service Twin Cities posted an interactive map, showing that Minneapolis has gotten 3.2 inches of snow and many of the cities in the area have gotten between 4-6 inches. Information was not yet available for St. Paul

With snowfall continuing, a slow-moving evening commute is expected. 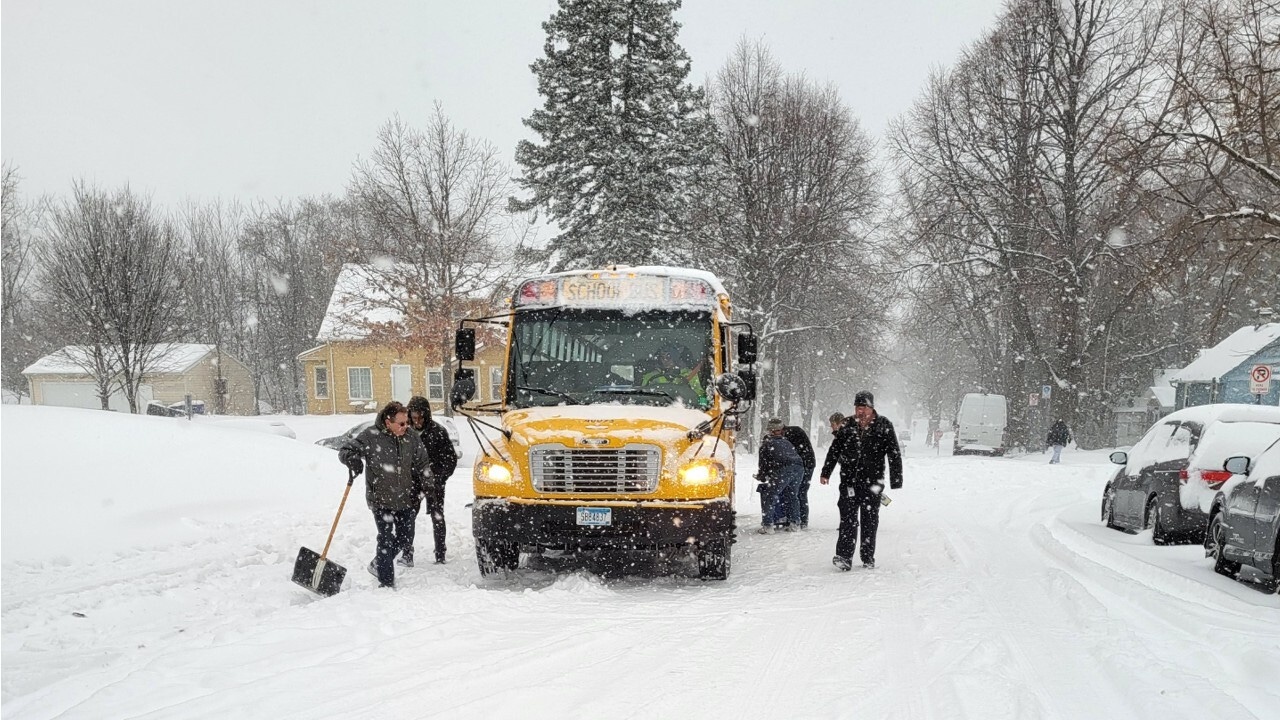 Meteorologist Wren Clair reports many roads as of early afternoon were either covered, or partially covered, by snow.

Meanwhile, the Minneapolis-St. Paul International Airport has closed its runways until at least 4 p.m. due to snowy conditions.

Snowfall continues Tuesday afternoon and the number of snow emergencies in cities throughout the state is ramping up.

Minneapolis and St. Paul have now both declared snow emergencies.

Meteorologist Chris Reece reports a band of heavy snow is parked over the metro area and is expected to remain for a few hours.

Meanwhile, Metro Transit reports roughly 47% of buses are currently delayed an average of nine minutes. The Blue Line was slightly delayed as crews worked to remove a stuck vehicle on the light rail tracks.

Multiple schools are closing early Tuesday as it becomes clear the snow isn’t letting up.

At a slower rate, cities have been declaring snow emergencies and giving their residents instructions for parking and avoiding snowplows.

Visit the following links for lists of SCHOOL CLOSURES and CITY ALERTS, and find more helpful links and features throughout the article below.

Roads started out fine for early commuters but quickly became littered with crashes, which KSTP reporters Hanna Conway and Ginna Roe have monitored throughout the morning. Scroll through the updates below for a recap of Tuesday’s weather and traffic conditions.

Stay with KSTP for all you need to know as the bout of winter weather continues.

Traffic has slowed down substantially since traffic reporter Hanna Conway began monitoring roads Tuesday morning, as shown in the side-by-side comparison below.

Many crashes and slippery conditions have led to delays and lane closures. The Minnesota Department of Public Safety advised people to work remotely if possible and highlighted the snow driving tips below if people don’t have the option to work from home.

Additionally, Metro Transit has been tweeting about delays of some of its transportation services.

Road conditions keep getting worse, and reporter Hanna Conway has started reporting crashes in the metro.

See live road conditions in the player at the top of this article, and find more traffic and weather information below.

In her most recent Live Drive update, reporter Ginna Roe says roads are already slick. Roe says she has already seen some cars slide off the roadway.

Reporter Hanna Conway says traffic is starting to slow down in some areas, but as of 6 a.m., the metro is crash-free.

Winter storm warnings are in effect through 9 p.m. Tuesday for parts of Minnesota and Wisconsin, and meteorologists are predicting 4-7 inches of snow by the evening.

5 EYEWITNESS NEWS reporters Ginna Roe and Hanna Conway are providing traffic updates throughout the morning Tuesday to help people stay as safe as possible during their morning commute. As of 5 a.m., roads are looking clear, but snow is already falling in some metro cities.

Some schools are also deciding to close for the day or have an e-learning day. CLICK HERE for an updated list.

The bulk of the snowfall Tuesday is expected in the morning and early afternoon.

People should also prepare for cold air, as wind chills could drop between zero- and -5-degrees Tuesday night.