If you’ve been spending more time on the roads lately, you’re not alone.

The Minnesota Department of Transportation (MnDOT) says that statewide, traffic volumes have returned to normal. In the metro, congestion is still down about 10-15 percent, which is particularly noticeable during the morning commute.

"With the morning commute, there’s a lot more focus on just commuter traffic and there’s still a lot of folks that are teleworking. In the afternoon we’ve got that commuter traffic, but we’ve also got on top of that, some of the other trips. Trips to the mall, trips to the soccer game," MnDOT’s Brian Kary said.

MnDOT has provided 5 EYEWITNESS NEWS with several traffic maps comparing congestion during the afternoon commute, starting with Oct. 16, 2019, which shows normal stop and go traffic around the metro. A year later, on Oct. 14t, 2020, the map shows just a few slowdowns. Fast forward to May 6 of this year, the final map shows that traffic volume during the afternoon commute has increased substantially.

As things return to normal, it’s still too early to predict the full impact teleworking will have on the morning commute. That’s putting MnDOT in limbo when it comes to planning future projects. 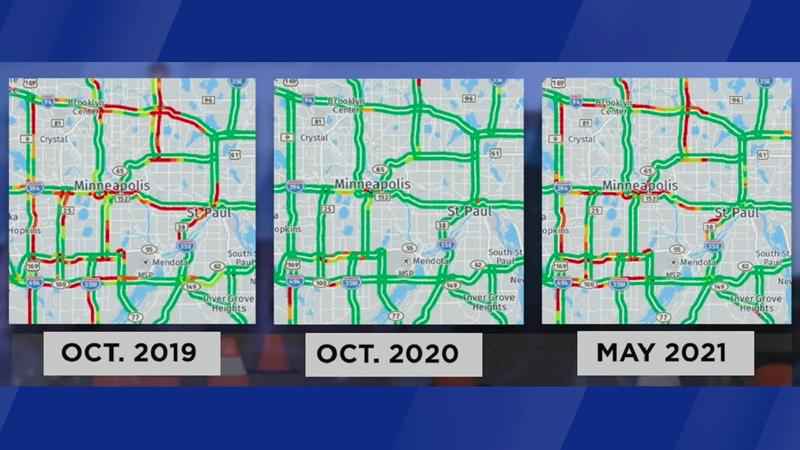 "It’s been a challenge for us, when you look at traffic forecasting, we’re doing corridor studies for doing highway improvements," Kary said. "Normally we’re looking at a 20-year-forecast and really this teleworking stuff has raised a lot of question marks for not only the near future, but for that 20-year forecast as well."

Those planning to head out on the roads for Memorial Day weekend, expect it to be packed. Over the last few weeks, there has been a noticeable increase in traffic on Thursday and Friday afternoons as people leave town.