On Tuesday, community members heard from the five finalists for St. Paul’s Police Chief for the first time.

Mayor Melvin Carter invited the public to two forums: one at 6 p.m. Tuesday at the Washington Technology Magnet School, and another at 11:30 a.m. Wednesday at the St. Paul Event Center. 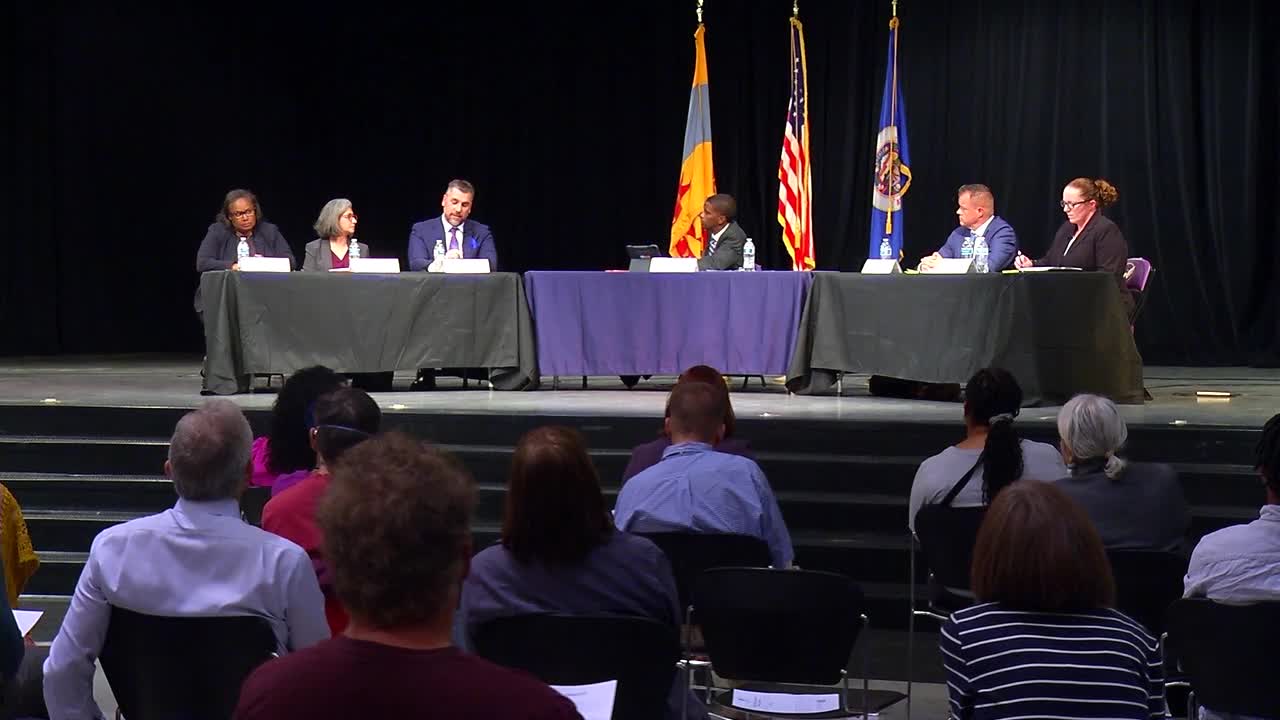 The co-chair of the committee to narrow down the search for the next chief says diversity is important when looking for the next top cop.

“St. Paul is such a neighborhood-based place, and so St. Paul folks really wanted us to make sure that the diversity of our city was going to be reflected into this chief’s leadership,” said Sasha Cotton, the Co-Chair of the search committee.

“I’m the only one sitting up here that wears a uniform on a daily basis,” said Hallstrom, as he pitched himself to the public during Tuesday’s forum. He joined SPPD in 1999 and serves as a Senior Commander responsible for the leadership and management of the eastern district.

“We need to build relationships with our community,” said Hallstrom, who emphasized that partnership is important gaining information that can help with investigations, as well as establishing trust between SPPD and those they serve.

At the Washington Technology Magnet School, each of the finalists shared their vision for the future of the Saint Paul Police Department.

“We can come together as a community and start to actually bring healing and be a role model,” said Henry, who joined SPPD in 1998. He is currently the Commander for the Narcotics, Financial Intelligence, and Human Trafficking Division.

The finalists also shared their leadership style with the public.

“We are not a department in my opinion that needs some drastic sweeping change,” said Murphy. “I want to continue coming in as the next chief setting that high bar.”

Murphy became a uniformed officer for SPPD in 2002 and in her current role, she oversees day-to-day operations of 563 sworn employees.

“I am that change ladies and gentlemen for Saint Paul,” said Dr. Bailey-Davis, who explained she’d be a results-oriented chief. “I am here to serve and transform lives.”

In the Standards and Accountability Division/Audits and Inspections Unit, for the Philadelphia Police Dept., she currently does audits and inspections of all departmental policies and procedures, develops operating procedures, and serves in an advisory capacity to line and investigative operations.

Commander Barragan joined the Saint Paul Police Dept. in 1996 and serves as the Unit Commander for Community Partnerships.

“As your chief I will represent my officers with integrity and compassion,” she said, while also pledging accountability. “When we make a mistake, we will own it.”

Over the course of an hour-and-a-half, Mayor Carter asked the candidates a range of questions including their approach to recruiting candidates and how they would balance rising crime with the need for police accountability and reform.

The candidates shared similar but differing perspectives on the most serious public safety challenge facing the city.

Hallstrom, however, responded, “I believe that the biggest problem we’re faced with in Saint Paul is our drug problem, especially with addiction to opiates.”

“I believe the biggest approach to gun violence is to take a proactive approach,” said Bailey-Davis.

Assistant Police Chief Murphy told the crowd, “Violent crime is our most pressing issue that we want to address.”

The candidates were aligned in their vision for collaboration in the years to come.

“It’s the responsibility of all of us to work together,” said Murphy.

Following the public forums, Mayor Carter will conduct final interviews with each of the candidates. His office told 5 EYEWITNESS NEWS he plans to select a final nominee to present to the City Council for approval by early November.