Tuesday marks the second day of a three-day nurses’ strike.

The Minnesota Nurses Association (MNA) says their members returned to the picket lines at 7 a.m.

5 EYEWITNESS NEWS has learned there were no negotiations between the MNA and hospitals on the first day of the statewide strike.

The MNA is calling their strike the largest in Minnesota history; a reported 15,000 nurses are walking the picket lines across the state at more than a dozen hospitals in the Twin Cities and up to the Duluth area.

There are seven healthcare provider groups that are the focus during the three-day strike. 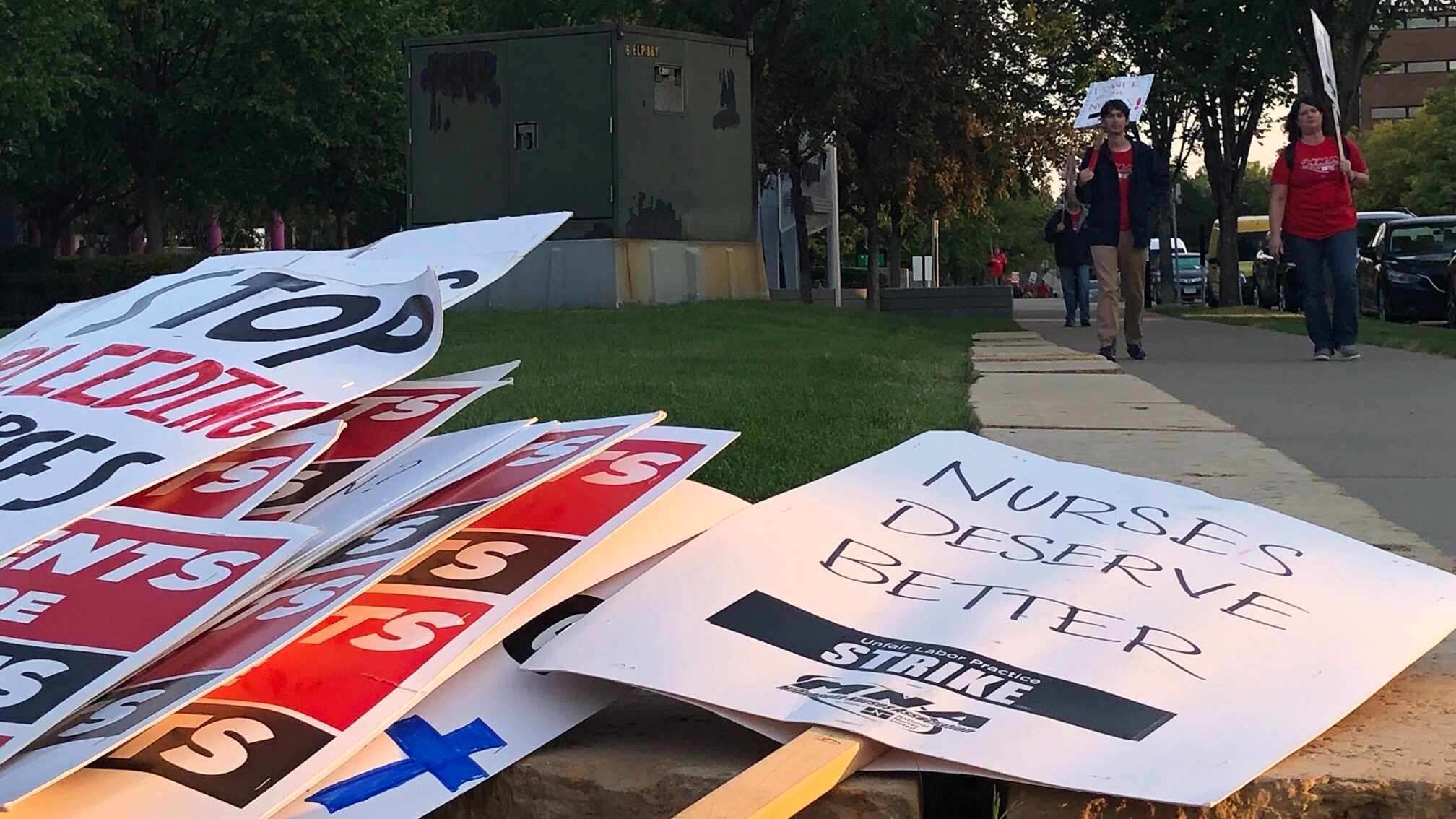 “We want to be able to say, based on the number of patients here and how sick they are, the acuity, this is the number of nurses we need to take care of them,” said Kelley Anaas, a registered nurse with Abbott Northwestern Hospital.

At a press conference on Tuesday, she called this a “tipping point for the nursing profession.”

MNA has been in negotiations with the healthcare systems for more than five months.

“We did not rush into this and we do not take this lightly,” Anaas said.

Paul Omodt, with Twin Cities Hospital Group, has previously told 5 EYEWITNESS NEWS, “We have offered the largest wage increase in 15 years, we’ve offered a 11-12% increase, but they remain at 29-30% which is unrealistic and unaffordable.”

The health systems have told 5 EYEWITNESS NEWS there aren’t any talks currently scheduled.

The nurses’ strike is scheduled to last until Thursday morning.

“It’s common that they’re pretty far apart even though they’ve been sitting at the negotiating table for a long time,” said Joseph Daly, a labor professor at Mitchell Hamline School of Law.

Daly has arbitrated nursing labor disputes across the country.  He says the decision to limit the strike to three days was likely strategic.

“The nurses know if they do an open-ended strike, they will lose the support of the public,” said Daly. “I think they have chosen a three-day strike to get across their point to the general public and let employers know they could go on a longer strike next time.”

Daly expects the two sides will reach a compromise on wage increases that fall between 10 and 30%. Allina and St. Luke’s have both called for a federal mediator to assist with the negotiations.

“It’s really hard to predict in a labor tension situation what’s going to happen but I think eventually they’re going to have to sit down with the help of a mediator and try to get this resolved,” Daly said. “They may actually have to go on another strike before they actually get to that point.”

There were two strikes during negotiations between the nurses’ union and Allina in 2016. The second strike that year lasted 37 days and marked the second longest nurses strike in state history.

“The longer strike was really a challenge for both the nurses who were out of work for over 30 days and the health system in that you have to have replacement nurses who will who will fulfill those roles of the striking nurses,” said Dr. Timothy Sielaff, who was the chief medical officer for Allina during the 2016 strike.

He’s now retired and teaches at the University of St. Thomas.

“There are a number of negotiating tactics that go into those decisions,” he said.

The 2016 strike was open-ended, while the current strike is scheduled to last three days.

Dr. Sielaff pointed out this strike has a far wider reach and comes after the pandemic put pressure on healthcare workers.

“That the strike is happening at multiple health systems is certainly going to stress the health systems,” he said. “I think in this post-COVID world, the issues that were just sort of bubbling up back then [in 2016] are now coming to a boil, and they are relevant across the entire state of Minnesota, and so I think we really have to pay attention to that.”

He calls the three-day strike “a very practical and effective way” of sending a message to the community without prolonged disruptions.

In a statement Tuesday, Allina said, “As we look toward the conclusion of the MNA strike, Allina Health has made the decision to have our MNA nurses return to work at the end of their strike. For Abbott Northwestern and Mercy Hospital in Coon Rapids and Mercy Hospital – Unity Campus in Fridley, MNA nurses will return at 7 a.m. on Thursday, Sept. 15. At United Hospital in St. Paul, MNA nurses will return at 6:30 p.m. on Wednesday, Sept. based on MNA’s 10-day strike notice. Traveling nurses’ assignments will end when our MNA nurses return. Allina Health remains committed to moving forward and reaching a fair contract that recognizes the priorities of both parties.”

The union told 5 EYEWITNESS NEWS due to a clerical error in the strike notice at United, those nurses will return to work on Wednesday night rather than on Thursday morning.

St. Luke’s also shared an update on the status of care at its hospital and outlined its priorities in future negotiatons.

In a statement, a spokesperson for St. Luke’s wrote:

“All areas of our hospital are open for patients, and we have been accepting and caring for patients from across the region. We will welcome our nurses back to St. Luke’s on Thursday morning at 7 am.

“St. Luke’s supports bringing in a federal mediator. A mediator uses their expertise to help the parties find common areas of agreement they may not have identified themselves. They are skilled at understanding when parties should be talking across the table and when the parties should be working independently so that an agreement can be reached.

“RN nurse managers, including an RN Administrative Supervisor, are on site 24/7/365. In addition, we also always have a Director and member of the Executive Team on call.

“Proposals by MNA leadership aim to prioritize a nurse’s preference over patient needs. No single individual at St. Luke’s, including physicians and administrators, has the ability to refuse to provide care to a patient. These decisions must be made by a healthcare team, including nurses, who understands the needs of patients in every unit of the hospital.

“St. Luke’s has talked extensively with MNA about staffing, and the reality is that many of the proposals made by union leaders would hurt staffing, rather than improve it. For example:

“Staff nurses are guaranteed 6 months off for maternity leave. They can use all sick time, vacation time or personal days to cover their leave.

“St. Luke’s nurses can use paid sick time after experiencing a miscarriage. St. Luke’s has made clear that nurses who miss work as a result of a miscarriage will be fully excused from their shifts without penalty.”