About 15,000 Minnesota nurses are estimated to have walked off the job at 15 hospitals across the state Monday morning, but healthcare providers say they’re committed to staying open.

The three-day strike began at 7 a.m. Monday, but nurses arrived well before the start time. Currently, the Minnesota Nurses Association (MNA) says there will be nurses at the picket line from 7 a.m. until 6:30 p.m. Monday, Tuesday and Wednesday of this week, and the strike will end at 7 a.m. Thursday.

“We’re feeling confident and energized in the strength that we have,” said Kelley Anaas, a registered nurse at Abbott Northwestern. “I hope it sends the message that it hasn’t just been the negotiating teams at the table, the nurses that we elect, who feel that there are necessary changes to be made to our contract.”

She and dozens of other nurses hit the picket line outside of Abbott Northwestern on Monday. They are pushing for additional workplace safety provisions, higher wages, and more of a voice in how hospitals are staffed.

“We want to be able to say based on the number of patients here and how sick they are, the acuity, that this is the number of nurses we need to take care of them,” said Anaas.

She was retracing the steps she took in 2016, when about 4,000 Allina Health nurses picked for more than five weeks. It was the second-longest strike in Minnesota history, according to MNA. 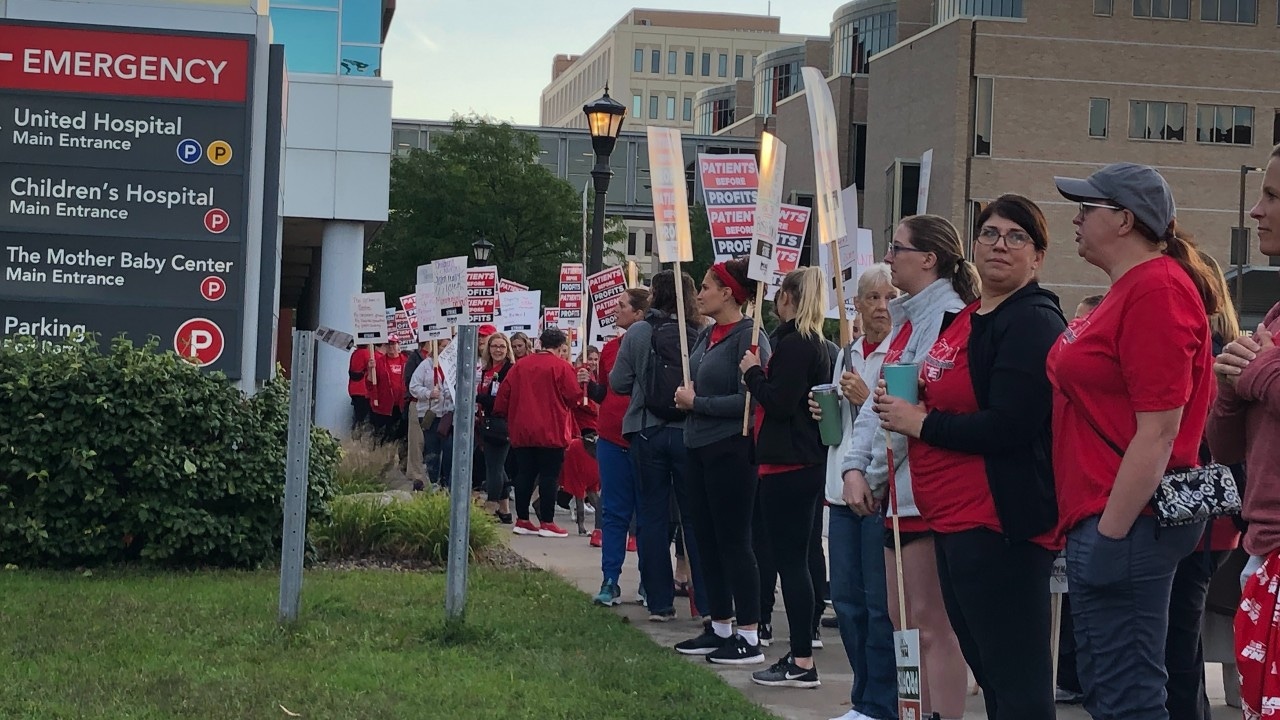 Nurses picket outside a Twin Cities hospital on the morning of Monday, Sept. 12, 2022. Credit: Eric Chaloux/KSTP

Roughly 6,000 nurses walked out of at least 15 hospitals during the longest strike, which was in 1984.

The MNA strike in 2010 was considered the largest in state history at the time, affecting more than 12,000 nurses at 14 hospitals. Anaas was a new nurse during that strike.

“This time feels different,” she said. “We know we have a lot more community support behind us after coming out of the pandemic and how we all went marching into the hospital while our bosses were at home.”

The union and healthcare providers remain apart on wage negotiations.

MNA initially sought about a 30 percent increase over the three-year contract. A union spokesperson explained they came down slightly over the weekend and are now seeking 10% in the first year, 9% in the second and 8% in the third year.

“We have offered the largest wage increase in 15 years, we’ve offered an 11 to 12% increase,” said Paul Omodt, with the Twin Cities Hospital Group, on Sunday.

In a statement on Monday, he said, “The Twin Cities Hospitals Group is deeply disappointed the nurses’ union has chosen to strike before exhausting all efforts to reach an agreement. The union rejected all requests for mediation and held fast to wage demands that were unrealistic, unreasonable and unaffordable and, instead, chose to put their agenda before patients. To be clear: the union’s choice to strike is theirs and theirs alone.”

Negotiations between seven major healthcare providers and the MNA have been going on for five months, and after negotiations over the past weekend did not result in a deal, the picket lines were set up.

The strike affects the following healthcare systems and hospitals:

For anyone wondering what the impact could be for patients who need to visit one of those hospitals during the strike, the hospital groups say a small number of elective surgeries and appointments which were already set up may need to be rescheduled. If that’s the case, hospitals are said to be contacting the patients who would be affected.

“We’ve brought in replacement nurses that will work alongside our trained management nurses and our experienced nurses will be there,” Omodt said.

On Monday,  there weren’t any negotiations between the Twin Cities Hospital Group and the union. According to Omodt, there aren’t any talks scheduled during the three-day strike.

Essentia Health also confirmed it didn’t conduct negotiations on Monday, nor has a bargaining date been scheduled.

On Sunday, Essentia Health issued the following statement: “We want to assure our patients that our hospitals will remain open and accessible during a strike. We have extensive contingency plans in place to deliver the highest standards of care.”

Allina Health confirmed it did not negotiate with MNA on Monday either and doesn’t have any additional negotiating sessions scheduled at this time.

An Allina spokesperson said in a statement:

“As we progress through the first day of the Minnesota Nurses Association strike, Allina Health continues to be focused on delivering safe, reliable care.  With patient safety as our priority, our teams have rescheduled a limited number of non-emergent appointments to ensure we are meeting our community’s emergent and on-going health care needs.

“We are grateful for all members of our care teams who are working to ensure continuity of care each day and throughout the duration of the 3-day strike.

“Based on MNA’s proposed 30% wage increase over the 3-year contract, as well as 30 additional economic proposals, it is clear that agreement on an economic package is the significant issue. As we have said all along, strikes do not benefit anyone and the only path to reaching agreement is through negotiations. At the conclusion of MNA’s strike, we are hopeful that they will be ready to engage in serious negotiations with the assistance of a federal mediator to help the parties remain at the table until a deal is reached.

For those who have questions about patient care during MNA’s strike, please go to AllinaHealth.org.”

St. Lukes told 5 EYEWITNESS NEWS in a statement, “This morning at 7 am we had a very smooth transition of care from St. Luke’s nurses to replacement RNs. We are fully staffed and extremely pleased with the quality of the replacement RNs. We are not on divert for medical patients and have accepted every patient from the region who needs our care. We are accepting patients in our emergency department and throughout our hospital, with the exception of our inpatient mental health unit. St. Luke’s entire team is doing an incredible job of caring for patients.”

It went on to say, “We are appropriately focused on caring for our patients during the MNA work stoppage and have not scheduled our next negotiating session. We look forward to returning to the table to reach a fair and equitable agreement. We must balance fair compensation, continued investment in services, and maintaining the highest standard of patient care, all while striving to keep health care affordable for our community.”

The statement went on to say, “We did everything we could to avoid a strike. We negotiated in good faith through 17 sessions, including 44 hours just this past week. On Saturday night at 10 pm, we were at an impasse and had to focus our resources on preparing to care for our region during the work stoppage. We did not abandon the negotiating process. We have been asking for federal mediation for months. MNA could have averted this strike and chose not to.”

In a statement on Sunday, Children’s Minnesota said it’s had plans in place for months, including national recruiting of registered nurses “who are experienced and specially trained in pediatric care.”

Editor’s Note: This article previously stated the strike would be from 7 a.m. – 6:30 p.m. Monday, Tuesday and Wednesday of this week, but has been updated to reflect nurses would be picketing during those times and the strike ends at 7 a.m. Thursday.