Wednesday, 15,000 nurses from hospitals in the Twin Cities and Duluth areas are voting whether to authorize a second strike.

This vote comes after members of the Minnesota Nurses Association (MNA) walked off the job for three days back in September.

The MNA says at this point, there’s been little to no movement at the bargaining table, which is why members are considering striking again.

If two-thirds of union nurses vote in favor of a strike, pickets could begin after a 10-day notice to employers. Nurses have until 10 p.m. Wednesday to vote.

According to the MNA, they will announce any decision regarding a strike Thursday morning. 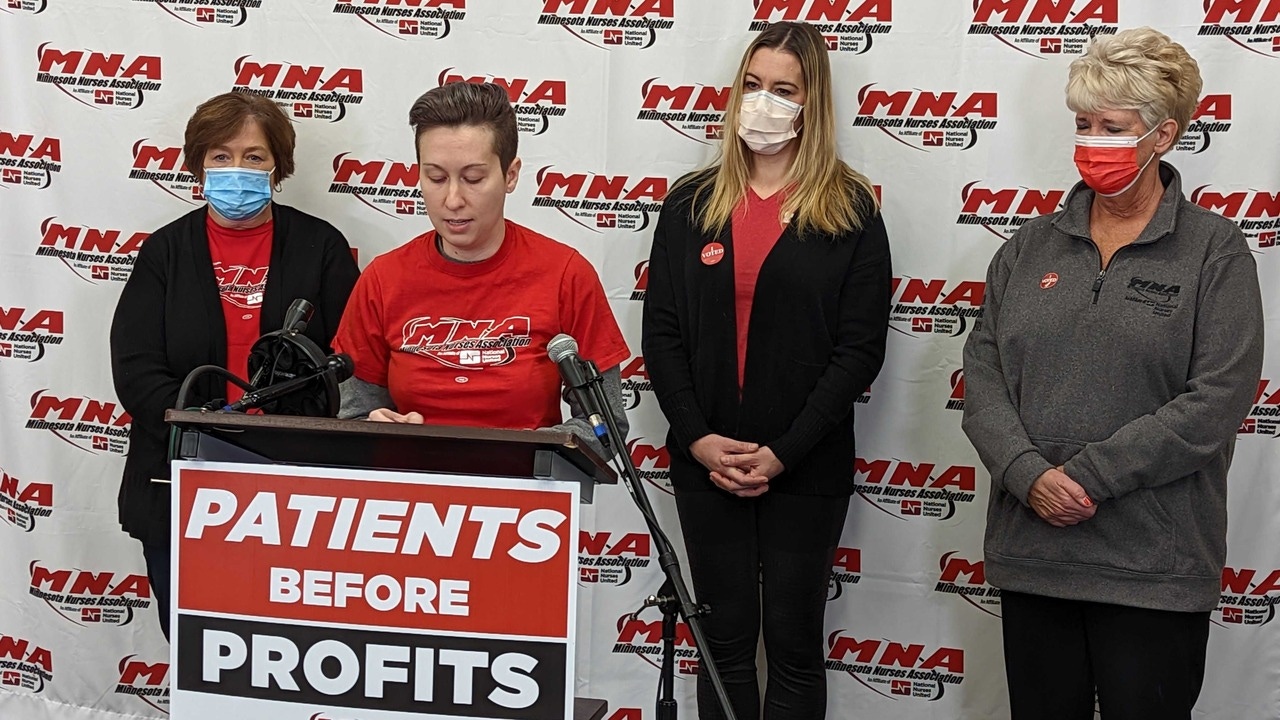 Nurses with the Minnesota Nurses Association spoke ahead of a strike authorization vote on Wednesday, Nov. 30, 2022 that could lead to a second fall 2022 strike from the union's 15,000 employees. (Nate Bergeson/KSTP)

Nurses are asking for better wages and a safer working environment. Leaders say this is also about ensuring patient safety, adding hospitals can’t continue to operate the way they are.

During a news conference Wednesday morning, MNA leaders described most units across the metro as short-staffed, with nurses often working 16-hour shifts.

This comes as the state sees a spike in respiratory illnesses, and nurses say that’s having a huge impact on emergency departments (ED).

“The ED is a disaster zone. They are working sometimes with only 4-5 nurses, and they have a waiting room of 75 kids… leaving just a few rooms to shuffle the dozens and dozens of patients that are waiting for a room,” said Amy McGlone, a Registered Nurse at Children’s St. Paul.

Nurses described the emergency departments at Minnesota Hospitals as “war zones”, with six to eight hour wait times and patients scattered across the hospitals, waiting in cafeterias and conference rooms for beds.

Throughout Allina Health’s negotiations with Minnesota Nurses Association (MNA), our message has remained the same: an agreement can only be reached by being at the bargaining table together.

Our nurses are an integral part of our care teams, and we are grateful for their ongoing dedication and expertise. We have always valued their perspective and involvement in key operational decisions. We have worked to find alignment on a number of priority issues and are narrowing the gap on our wage proposals. MNA is now seeking a 22.5% wage increase over the three years of the contract and we have increased our wage proposal to 13.25% over three years.

A strike or even the threat of a strike creates an unnecessary distraction for our employees and the communities we serve. With escalating illness and increased needs for care, our community is counting on all of us to provide the exceptional care they expect from Allina Health. We believe that a settlement is attainable and urge MNA to focus its energy on bringing these negotiations to conclusion rather than asking its members to consider another strike that our community can simply not afford. We are hopeful to continue to make meaningful progress at our next negotiation session this Friday, Dec. 2, as it is our desire to reach a fair contract settlement and return our sole focus to our shared mission: caring for our patients.

Essentia Health says it reached a tentative agreement with MNA nurses in Moose Lake Tuesday, and they will be back at the bargaining table Friday for nurses in Duluth and Superior.

5 EYEWITNESS NEWS has reached out to other hospital groups for comment and is still waiting to hear back. This article will be updated with their responses as they become available.

“I’ll tell you what, there’s no doubt that the nurses and the job that we do at the bedside is the best thing about health care right now in this country, and they’re throwing it away with two hands,” said MNA President Mary Turner during a news conference earlier this month.

Union leaders spoke about the vote Wednesday morning at their headquarters in St. Paul. You can view that full news conference below.