MNA leaders announce plan to vote on another strike

Members of the Minnesota Nurses Association say they’ll vote on another strike due to the lack of progress in contract negotiations.

The nurses are asking for pay increases, scheduling changes and safer working conditions.

In September, 15,000 nurses walked out in a historic three-day strike. Many of the nurses have been working without a contract since the end of May.

Nurses say they’re bargaining in “good faith” without much movement. 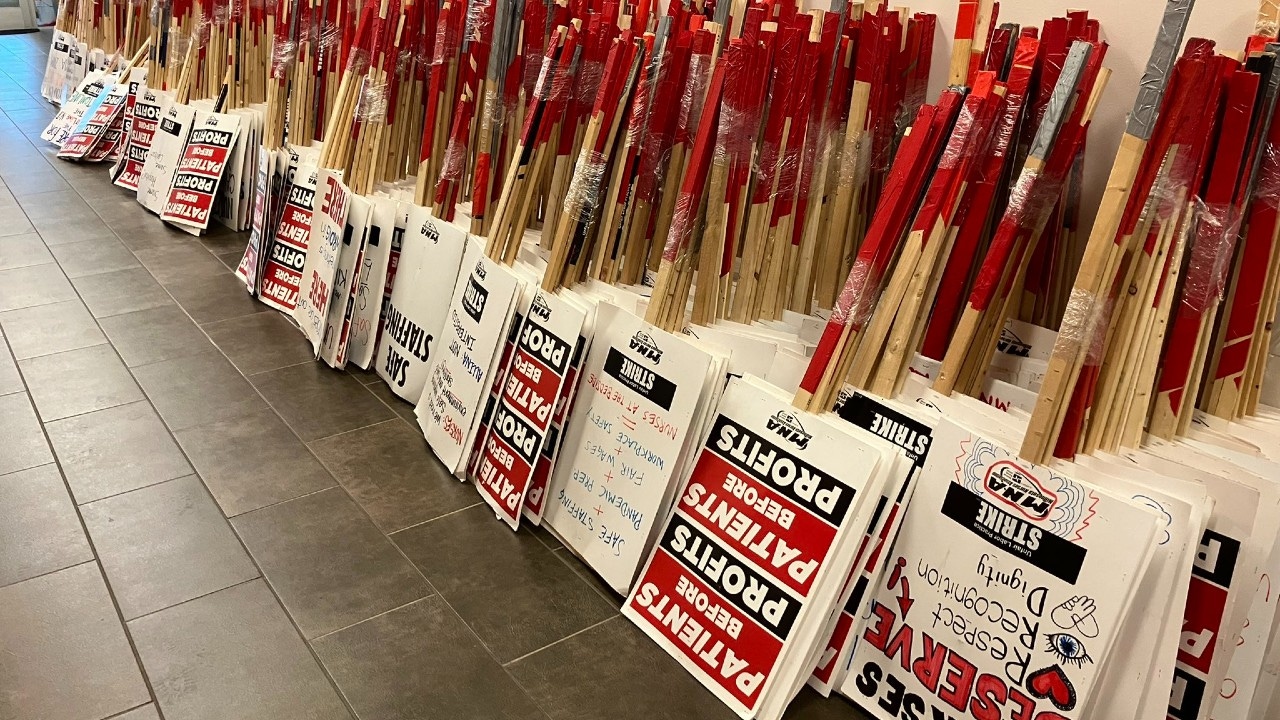 MNA picket signs site along a wall. The nurses union announced its intent on Nov. 17, 2020, to vote on authorizing another strike. (Kelsey Christensen/KSTP-TV)

Because of that, MNA says its members will vote on Nov. 30 to authorize another strike at Twin Cities and Twin Ports hospitals. If authorized by at least two-thirds of the members, the union would be able to give hospitals a 10-day notice before being able to strike.

Thursday, health groups responded to the MNA’s decision, and issued the following statements:

“We’re pleased that MNA President Mary Turner today finally agreed to pursue mediation. We believe mediation is an effective tool to reach agreement, particularly in contract negotiations that have gone on for more than seven months. We, as the Twin Cities Hospitals Group, are committed to meeting as much as is practical to bargain through mediation to reach a contract settlement that is beneficial for both parties. Our nurses are valued partners in care and this principle is central to who we are as health systems and it extends to all our work in union negotiations. We share the desire for our nurses to work in an environment where they feel valued and supported. We will continue to bargain in good faith and work hard to reach a resolution. We know the current situation inside hospitals throughout the country is very challenging and a union work stoppage could have disastrous consequences for our patients and the communities we serve.”

“Essentia Health continues to believe that if both parties come to the table in good faith and engage in constructive discussions, we can reach an agreement that supports excellent patient care and the growth and development of all our nurses. That’s why we are disappointed to hear the MNA is considering another work stoppage. As we saw earlier this year, a strike does not bring us closer to an agreement. Our history of years of successful negotiations shows us that the best solutions are found through productive dialogue at the bargaining table. We remain committed to that effort and expect the MNA to explore with us innovative solutions that work for our nurses and the communities that we serve. In the meantime, Essentia’s highest priority will remain the safety and well-being of our patients. Updates about bargaining are available at essentiamnabargaining.org.”

When announcing their plan for a strike authorization vote later this month, the Minnesota Nurses Association (MNA) publicly said it is open to mediation. Allina Health has repeatedly requested mediation for months and welcomes it as the best next step to reach agreement for all involved.

We are facing an intensifying surge of illness related to RSV and influenza that is creating an access-to-care crisis in our hospitals with real impacts to the lives of Minnesotans. With this vote, the union is choosing to be opportunistic at a time of vulnerability for our community by disrupting care.

Allina Health has a negotiation session with MNA scheduled for Friday, Nov. 18, and we are willing to engage a mediator to be part of that session. Based on today’s news conference, we will take the union at their word that they are finally ready to participate in meaningful bargaining, rather than continuing to make unsustainable economic demands, resorting to public theater and creating stalemates that ultimately result in unnecessary impacts to those we serve.

As previously reported, two weeks ago, the nurses held a rally in downtown Minneapolis, where union president Mary Turner called on board members of healthcare systems to hold their CEOs accountable and cited the need for safer work environments.

Multiple health care organizations issued statements on Nov. 2 in response to that rally.

“Allina Health is disappointed that the Minnesota Nurses Association continues to focus its energy on public rallies and demonstrations rather than getting serious about negotiating a fair and sustainable contract.”

Essentia Health says it has exchanged proposals with the union this week, saying the following:

“We look forward to continued movement at the next bargaining session scheduled for Dec. 1.”