Nurses represented by the Minnesota Nurses Association rallied in downtown Minneapolis Wednesday, over a month after their latest picket.

15,000 MNA members first went on a historic three-day strike back in September and have been negotiating with hospital groups across the state since then.

Minnesota Nurses Association President Mary Turner spoke at the rally about the need for safer staffing and safer workplace conditions. 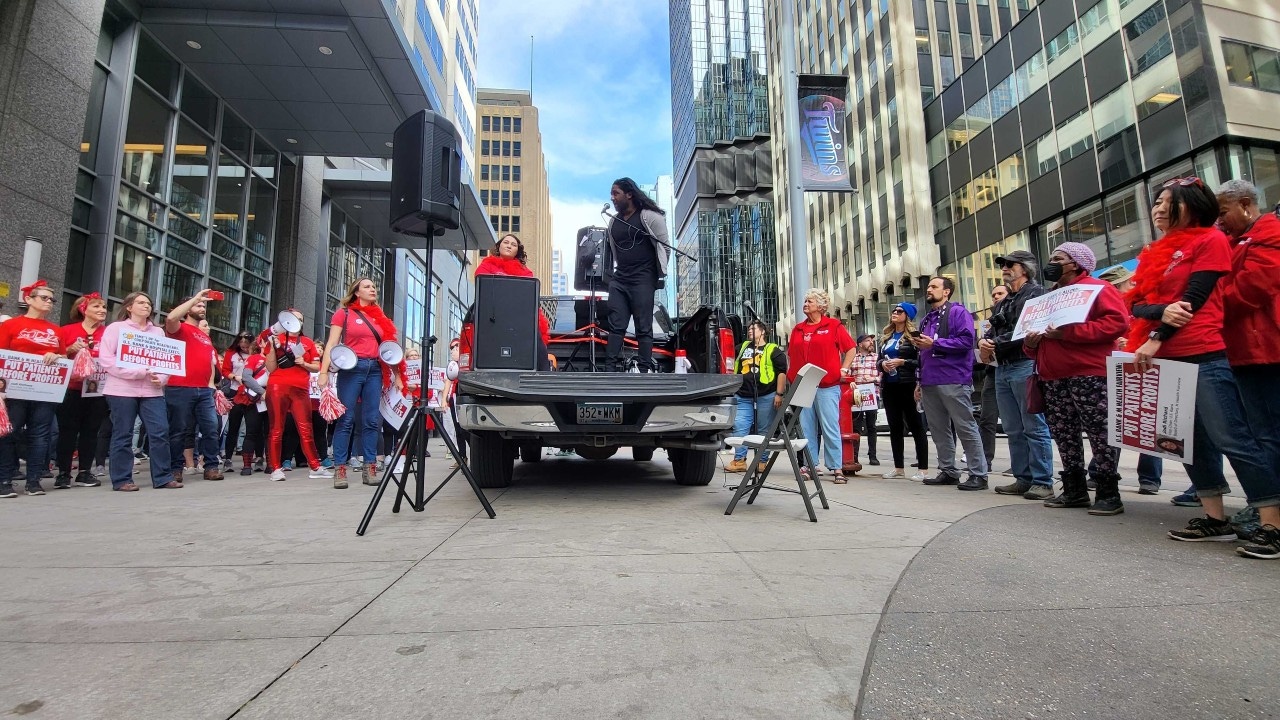 Turner called on board members of healthcare systems to hold their CEOs accountable for what is going on in the hospitals.

“If all this was about money we’d be traveling right now, but it’s not,” Turner told the crowd. “It’s about a safe work environment not only for us but a safe place for our patients to heal.”

Greta Callahan, the Minneapolis Federation of Teachers and Education Support Professionals president of the teacher’s chapter, was also at the rally and spoke to the crowd.

She talked about the teachers union and nurses union standing up for each and alongside each other during their respective strikes this year, as well as highlighting some similarities in their demands.

5 EYEWITNESS NEWS has reached out to the involved hospitals for an update on negotiations and received the following responses from Allina Health and St. Luke’s:

Allina Health is disappointed that the Minnesota Nurses Association continues to focus its energy on public rallies and demonstrations rather than getting serious about negotiating a fair and sustainable contract at the bargaining table.

Since March, Allina Health has negotiated in good faith with the union 18 times and we have made progress on priority non-economic proposals. Yet, proposals around unreasonable wages and staffing provisions continue to stall negotiations. We believe bringing negotiations to a common table with other health care systems can move us toward a contract agreement. We renewed this request as recently as October 31 and have not heard anything from the union. We continue to ask for the engagement of a neutral mediator to assist both parties in coming to a contract agreement. The union has refused.

Allina Health’s next bargaining session is tomorrow, November 3. At a time when our community’s health care needs are high, the time is now to bring these contracts to a productive conclusion for the benefit of our teams and the patients and communities we collectively serve.

St. Luke’s and the MNA have participated in 20 negotiation sessions and have a 21st scheduled. While we continue to make progress, MNA’s demands regarding pay increases and control of hospital staffing levels remain sticking points. We are committed to coming to a fair agreement that recognizes the great care that our nurses provide every day at St. Luke’s. We believe that federal meditation would help us conclude this negotiation and again call for MNA to agree to this as well.

This article will continue to be updated as more hospitals respond to KSTP’s request for comment.