A source connected to the 1980 team told 5 EYEWITNESS NEWS Pavelich was found at the Eagle’s Healing Nest, a mental health treatment facility in Sauk Centre where he had been living. No cause of death has been confirmed.

“We are saddened to hear about the passing of 1980 Olympic gold medalist Mark Pavelich,” USA Hockey said in a statement. “We extend our deepest condolences to Mark’s family & friends. (He is) forever a part of hockey history.”

Pavelich, who turned 63 last week, lived in mental treatment facilities after a court declared he was unfit to stand trial for an August 2019 violent assault on a Lutsen, Minnesota neighbor which left the victim with several broken bones. The court ruling declared Pavelich mentally ill and dangerous.

He was charged with four felony counts – second and third degree assault, possession of an illegal shotgun and receiving a gun with an altered or missing serial number. 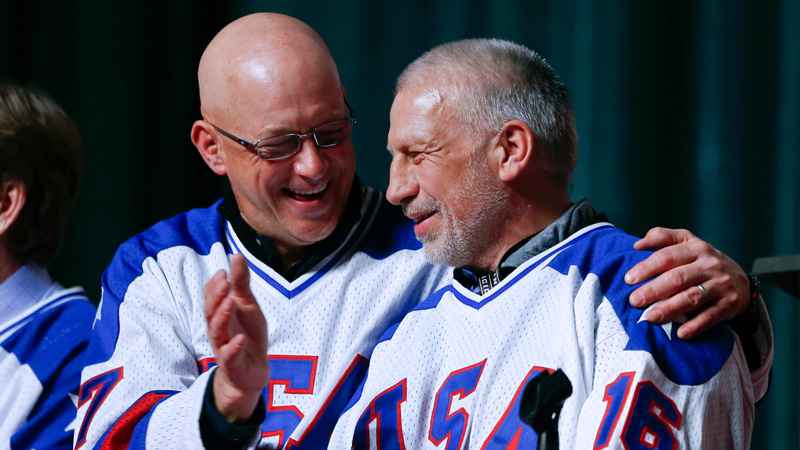 FILE - In this Feb. 21, 2015, file photo, Jack O'Callahan, left, and Mark Pavelich of the 1980 U.S. ice hockey team talk during a "Relive the Miracle" reunion at Herb Brooks Arena in Lake Placid, N.Y. Pavelich has died at a treatment center for mental illness. Officials in Anoka County, Minnesota, confirmed Friday, March 5, 2021, that Pavelich, 63, died at the Eagle's Healing Nest in Sauk Centre, Minn., Thursday morning. The cause and manner of death are still pending.[AP Photo/Mike Groll, File]

Pavelich was charged with felony assault but Judge Michael Cuzzo found he was incompetent to stand trial because he was mentally ill and dangerous. According to the judge’s order from December 2019, a psychologist found Pavelich was suffering from delusions and paranoia. Another psychologist found he suffered from a mild neurocognitive disorder due to traumatic brain injury, likely related to repeated head injuries.

As a kid growing up in Hibbing I used to go to the arena and hang out with gear in hand waiting to see if I could skate w the teams that rented the ice! Mark Pavelich always let me join with the Eveleth guys! He taught me so much about the game! #RIP pav

Pavelich graduated from Eveleth High School and played college hockey at Minnesota-Duluth before playing a major role in the 1980 Olympics.

He had two assists in the United States’ legendary semifinal win over the Soviet Union – including on Mike Eruzione’s historic game-winning goal.

After the Olympics, Pavelich played five seasons with the New York Rangers and also played for the Minnesota North Stars and San Jose Sharks. He totaled 137 goals and 192 assists in his 355 National Hockey League games.

He had been facing legal and medical troubles for several years.

In 2012, his 44-year-old wife, Kara, died in an accidental fall from a second-story balcony at their home. Two years later, Pavelich sold his gold medal for $262,900 through an auction house, saying he wanted to help his adult daughter.

Pavelich and Bob Suter are the first two members of the fabled 1980 gold medal team to pass away, along with head coach Herb Brooks.

Material from the Associated Press was used in this report