Minnesota-grown apples: A legacy of hardiness and juiciness enjoyed around the world

There’s a good chance your favorite apple was developed by a team of researchers at the University of Minnesota.

The University has been developing new varieties of apple trees since 1908. There are about 30,000 trees growing at the 200 acre Horticultural Research Center in Carver County. They’ve grown millions of trees over the years searching for the next Honeycrisp.

“You know it was sort of a subsistence life,” said Bedford. “But apples gave them a little bit of sweetness. There was some sugar in apples, you could bake them, and you could make sauce of them. And a lot of them went into hard cider, let me tell you!”

The University of Minnesota has introduced 28 varieties of apples in the last 115 years. The list includes the Haralson, Zestar!, Sweet Tango, First Kiss’ and the biggest hit of all Honeycrisp.

“Honeycrisp really has spread around the world. It’s been a great ambassador for our breeding program” said Bedford.

The research center plants about 4,000 apple trees a year. According to Bedford, each one is propagated from a tree with promising qualities. “And we will take cuttings from that tree, graph that onto a rootstock and in effect, clone this tree.”

The goal is to create a better tasting, more hearty and disease resistant apple.

They get rid of another 4,000 trees each year that don’t make the cut. And to determine that, this time of year, when the fruit hangs heavy on branches, Bedford uses his keen sense of taste to sample up to 500 apples a day.

“Well, you know, they say an apple a day keeps the doctor away. So you can imagine how far away that doctor must be from me” he said.

“When you think about the apples that the university has developed, you have to start with David Bedford. And he’s this treasure of a resource to the industry” said Paul Hugunin from the Minnesota Department of Agriculture.

According to Hugunin, Minnesota sells up to $20 million worth of apples a year.

“Minnesota grown apples are nothing short of miraculous,” he said. “We’re living where it’s very difficult to grow things because we’ve got a short growing season. We have some of the harshest winters anywhere. And yet we have apples that are grown all over the world and are some of the best anywhere.”

There is a lot of swinging and missing in apple breeding. One in 10,000 trees will make the cut. Here’s how Bedford searches for perfection:

“So the first thing we would look at, of course, is the skin color red? And most people assume that if an apple is red it’s ripe. But i can tell you that that’s only true in about 50% of the cases. The red skin color will often come before the real maturity does. But the real truth is told on the backside, the part that’s not red. When you turn that apple around you want to see a more yellow.”

If it passes the eye test, he tastes them. “For me,” Bedford said, “the first thing I’m thinking about is what is that texture? Is it like a Honeycrisp or is it like a Red Delicious? Is it wonderful or is it horrible?”

Bedford says he rarely tastes an apple and thinks it’s wonderful. “But I do remember that one case in my recent history. And that was the first time I tasted the original Sweet Tango tree.”

Sweet Tango is a cross between a Honeycrisp and a Zestar!. The original Sweet Tango tree is still alive and stands alone in a field at the Horticultural Research Center because it’s the only tree that made the cut. It’s the parent of every Sweet Tango apple tree in the world. 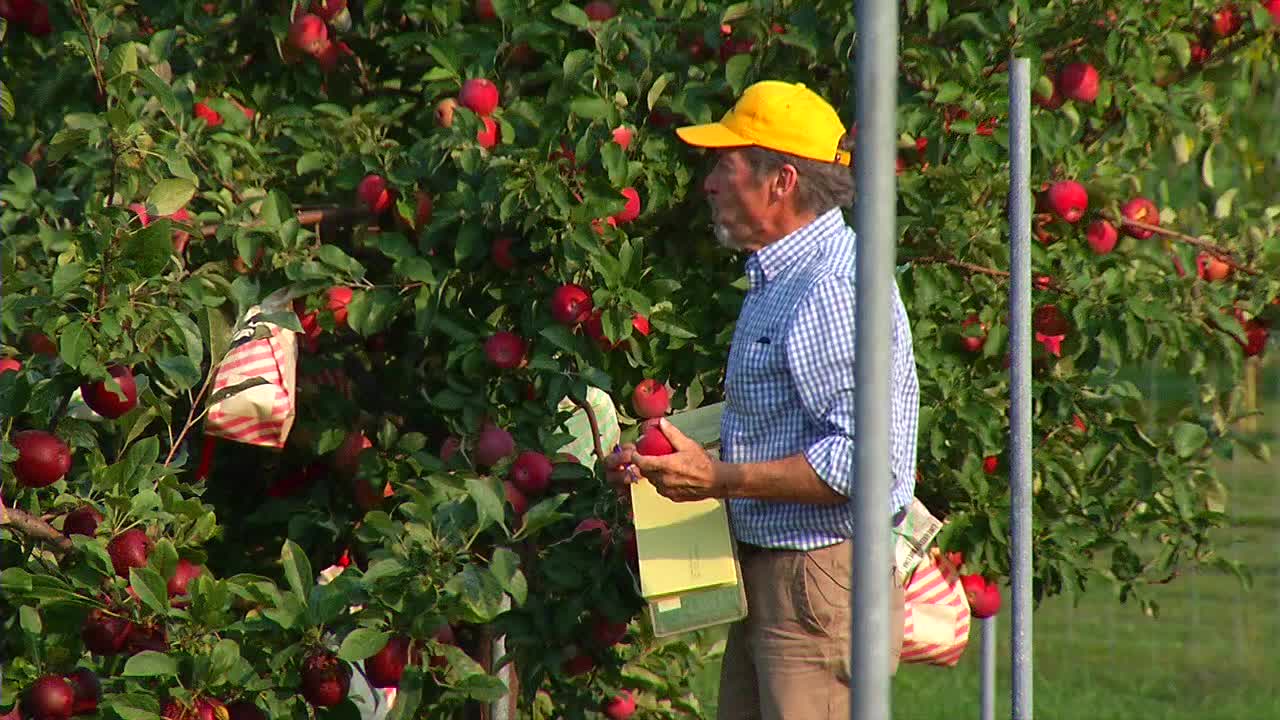 A University of Minnesota apple breeder tastes hundreds of apples a day in an effort to create better-tasting, more resilient apples (KSTP).

The most famous tree is in another part of the orchard. It’s the oldest Honeycrisp apple tree in the world.

“It’s been pretty productive” said Bedford. “I would say somewhere in the neighborhood of probably 20 million trees worldwide. It’s been a workhorse.”

More than anything, Bedford says you need patience if you’re in the business of developing new kinds apples. “I think in the apple breeding world you have to be satisfied with delayed gratification because the whole process will takes 20-30 years. And in fact, Honeycrisp was bred 30 years before it was released. And now it’s been out for about another 30 years. So 60 years later we’re still proud of it.”

David Bedford and Professor Jim Luby have worked closely together to lead the U of M’s apple breeding program for 40 years. They say apple variety number 29 is called Triumph.  It will be available at garden centers next year. Variety number 30 is in the works, but it doesn’t have a name yet.