Minneapolis police say they are seeing a record-setting number of car thefts of some older model Kia and Hyundai vehicles, up 893% compared to 2021, blaming social media how-to video challenges as the cause.

A 14-year-old boy suffered life-threatening injuries after wrecking a stolen Kia last weekend, according to MPD.

“This is outrageous, it’s absolutely insane what’s going on here,” said MPD Chief Brian O’Hara. “Kids are learning they can do very quickly, and the problem is it’s resulting in some very serious tragedies.”

The theft problem has gotten so bad that insurance companies are now mulling whether they want to continue writing policies for the vulnerable Kia and Hyundai models, an industry expert tells 5 EYEWITNESS NEWS.

“It’s something I’ve never seen large insurance companies are starting to not insure, Kia and Hyundai, because they are stolen so frequently,” said Mark Kulda, vice president of public affairs for the Insurance Federation of Minnesota. 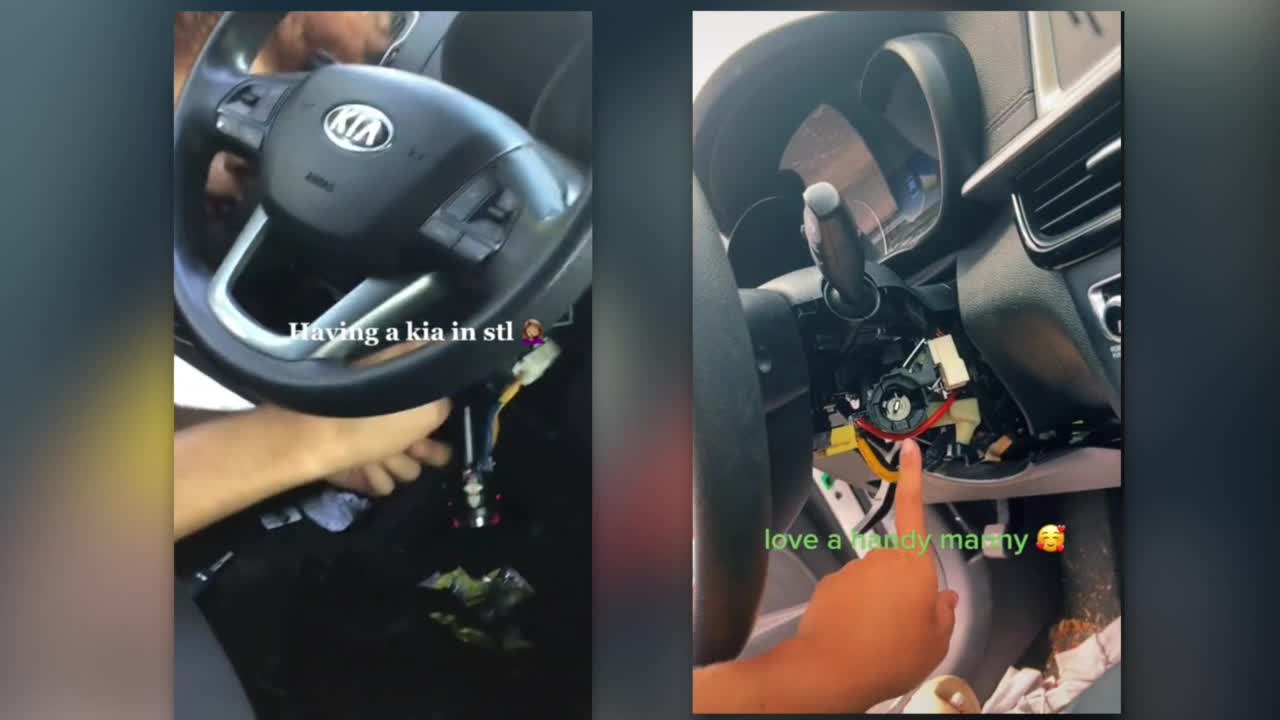 These screengrabs from social media videos show how some Kia and Hyundai vehicles can be started using USB cables.

“It’s getting expensive to insure those because the risk of theft is so high,” Kulda said.

Halbach, the relative of a KSTP employee, said the Elantra was stolen a second time outside his Minneapolis home.

“They didn’t get as far that time,” he said. “I left the gas almost on ‘E’ — I didn’t have time to top off. It worked to my advantage,” Halbach said.

Kulda said some insurance companies are looking at cutting comprehensive coverage, which lenders require for car owners who are still paying off their loans.

“You may need to shop around and find an insurer that does. Not all companies are doing this — many of the big ones are — which means it’s going to be difficult for people to make a lot of phone calls to figure out which companies are providing that coverage,” Kulda added.

5 EYEWITNESS NEWS reached out to a few large insurance providers to see if there were possible changes coming for consumers who drive the vehicles in question. So far only Progressive has issued a response.

“We’re committed to providing affordable insurance solutions for consumers based on the level of risk that they represent while also ensuring our policies are accurately priced.  Due to the theft risk that some Hyundai and Kia vehicles present, in many cases it makes these vehicles difficult to insure, so we have adjusted our acceptance criteria for new business on some of these models. We’ll continue to monitor how this issue plays out, and are hopeful to be able to revisit our decision as the theft risk diminishes and community awareness improves.”

Hyundai’s American offices emailed the following response regarding the rise in thefts:

“We remain concerned about the increase in thefts of certain Hyundai vehicles that have been targeted in a coordinated social media campaign. Currently, Hyundai provides steering wheel locks, as available, to law enforcement agencies in impacted areas.  In addition, Hyundai will provide two other options for owners of these earlier model year vehicles targeted by thieves.

“Hyundai has released a glass break sensor security kit that targets the method of entry used by thieves to break into these vehicles. These kits are available for purchase and installation at Hyundai dealerships and Compustar authorized installers across the country. The MSRP for the kit is $170, and the estimated cost for installation may vary by location.

“Hyundai is also developing a software update to further secure these targeted vehicles.  We anticipate that this software update will become available for certain vehicles in the first half of 2023, with updates for other vehicles following thereafter.

“Customers who have questions can contact the Hyundai Customer Care Center at 800-633-5151.”

“Kia is saddened to learn that a juvenile in Minneapolis was found injured this week in a crashed vehicle that was reported as stolen. We remain concerned about the recent trend among youth in some areas, encouraged by social media, to target certain Kia cars with a steel key and “turn-to-start” ignition systems. Such criminal conduct endangers our local communities and violates property rights.

“While no car can be made completely theft-proof, Kia continues to make steering wheel locks available to customers through interested local law enforcement agencies, subject to available supply, at no cost to concerned owners of these vehicles.

“Kia also continues its efforts to develop additional solutions for vehicles not originally equipped with an immobilizer, including the development and testing of enhanced security software. Kia will soon be making an announcement regarding the availability of software upgrades to owners of affected vehicles.

“All 2022 models and trims have an immobilizer applied either at the beginning of the year or as a running change, and all Kia vehicles meet or exceed Federal Motor Vehicle Safety Standards.

“Kia customers with questions regarding their Kia vehicle should contact the Kia Consumer Assistance Center directly at 1-800-333-4542 (Kia).”