Wright family laments, community reacts to ‘slap on the wrist’ sentence for Potter

UPDATE: Around 5 p.m Friday evening, a car caravan and group of protesters on foot gathered in downtown Minneapolis outside a condo building they believed to be Judge Regina Chu’s residence.

The group then moved across the metro to the outside of the Brooklyn Center Police Department.

Wright’s parents expressed anger after a judge sentenced the former police officer to two years in prison, well below what prosecutors sought. 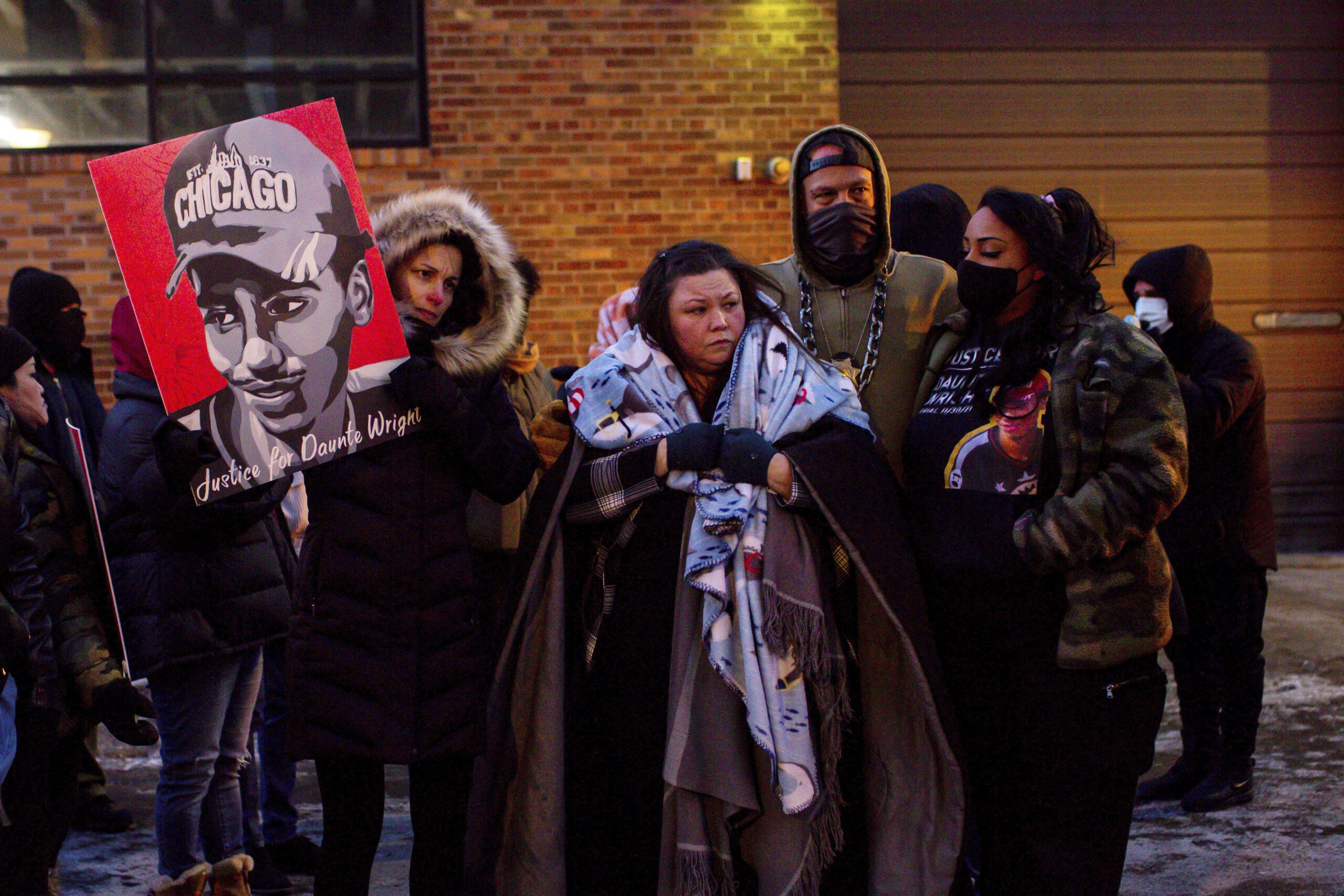 Katie Wright said Friday that Potter “murdered my son” adding, “today the justice system murdered him all over again.”

Potter was convicted of manslaughter for fatally shooting Wright as he sought to drive away from police last April at a traffic stop. Potter said she meant to grab her Taser.

Wright’s father, Arbuey, called the sentence “a slap on the wrist.”

Minnesota Attorney General Keith Ellison was expected to speak but did not during the morning news conference. His office later released the following statement:

“Today is a somber day.

“Today is a somber day above all because Daunte Wright is not with us.

“Daunte’s life mattered. He was a son, a father, a brother, a friend. He was a bright young man with big hopes and dreams for himself and Daunte Jr. He should have had his whole life ahead of him to turn those dreams into reality. Instead, there is a hole in the Wright family and in the life of his young son that can never be filled. Nothing and no one can restore their loss.

“I send my deepest condolences again to his mother Katie, his father Aubrey, his son, his siblings, and everyone who loved him.

“Judge Chu heard from the witnesses and attorneys on both sides. She read many letters on both sides, and she read and considered the evaluation and recommendations contained in the pre-sentence investigation.

“I accept her judgment. I urge everyone to accept her judgment. I don’t ask you to agree with her decision, which takes nothing away from the truth of the jury’s verdict. I know it is hurtful to loved ones of Daunte Wright. I ask that we remember the beauty of Daunte Wright, to keep his memory in our hearts, and to know that no number of years in prison could ever capture the wonder of this young man’s life.

“There is no cause for celebration: no one has won. We all have lost, none more than Daunte Wright and the people who love him. None of us ever wanted Kim Potter to recklessly pull the wrong weapon and kill Daunte Wright.

“What can we do now?

“We can talk. We can try to understand. We can change policy, and we can work together.

“Can we come together to fix weapons confusion and prevent more deaths? I hope the jury’s guilty verdict will help. But there is so much more to do.

“Everyone has a role to play in ending it: police officers, departments, manufacturers. Perhaps someday, Kim Potter might also be part of the solution.

“Ms. Potter could make a powerful contribution. She could have a profound impact on police officers, departments, and manufacturers about the urgency of ending weapons confusion and saving lives. It will be up to her to show that she can do this with true remorse and make true amends. I hope she can.

“If out of the tragic death of Daunte Wright, we can prevent any more deaths from weapons confusion, that would be a powerful legacy.

“What more can we do?

“Can we finally develop practices of use of force that keep all of us truly safe and make none of us afraid?

“Can we finally transform the relationship between community and law enforcement into one of mutual respect and trust?

“Can we finally create a justice system that does more than perpetuate the cycle of offense and punishment?

“For the State’s part, we will continue our pursuit of equal justice. No one is above the law, and no one is beneath it. Accountability is the first step on the road to justice.

“But justice is more than accountability. It is also compassion, mercy, and healing, both individual and generational. Healing allows us to see the humanity in each one of us — everyone included, no exceptions.

“In the end, when great tragedy strikes, we must find the courage to carry on. We must continue to tell the truth and try to make a better, more just world than we have now. The work of justice continues.“

“While we disagreed with the trial verdict, we respect the court and jury’s role, and appreciate the significant downward departure in sentencing of 24 months in custody. Two-thirds will be served in prison, while one-third can be served on conditional release. This is a significant decrease from the state sentencing guidelines of an average of seven years in custody.

“We are thankful for Judge Chu’s thoughtful approach in her stated reasoning, as she recognized Ms. Potter’s law enforcement service and that she made a tragic mistake.

“We also acknowledge the actions of Minnesota Attorney General Keith Ellison in advocating for a just sentence for Ms. Potter and commend the professionalism in advancing a sentence commensurate with Ms. Potter’s actions.”

The National Association for the Advancement of Colored People issued the following statement:

“As scores of Black men sit in prison for the rest of their lives for committing non-violent crimes, Kim Potter will be a free woman in one year despite the fact that Daunte Wright’s daughter will live the rest of her life without her father.

“The NAACP stands with Wright’s family in collective outrage as we witness yet another injustice in Minnesota. 16 months in prison and 8 months on probation is a slap on the wrist. As scores of Black men sit in prison for the rest of their lives for committing non-violent crimes, Kim Potter will be a free woman in one year despite the fact that Daunte Wright’s daughter will live the rest of her life without her father.

“This only magnifies what we already know – the system is broken. Our hearts and minds are with the Wright family today as they suffer another injustice.”

“Today’s sentencing of Kim Potter leaves the family of Daunte Wright completely stunned. While there is a small sense of justice because she will serve nominal time, the family is also deeply disappointed there was not a greater level of accountability. The Judge’s comments at sentencing showed a clear absence of compassion for the victim in this tragedy and were devastating to the family. Judge Chu’s comments about Potter resembled those of a job recommendation and not that of a senseless and preventable death of a promising life. The death of Daunte remains excruciatingly painful and the family prays for greater peace and healing within their family and in their community. The Wright family appreciates the work of the jurors who found Ms. Potter guilty. Furthermore, our legal team will continue to fight for justice in the civil system in Daunte’s name.”