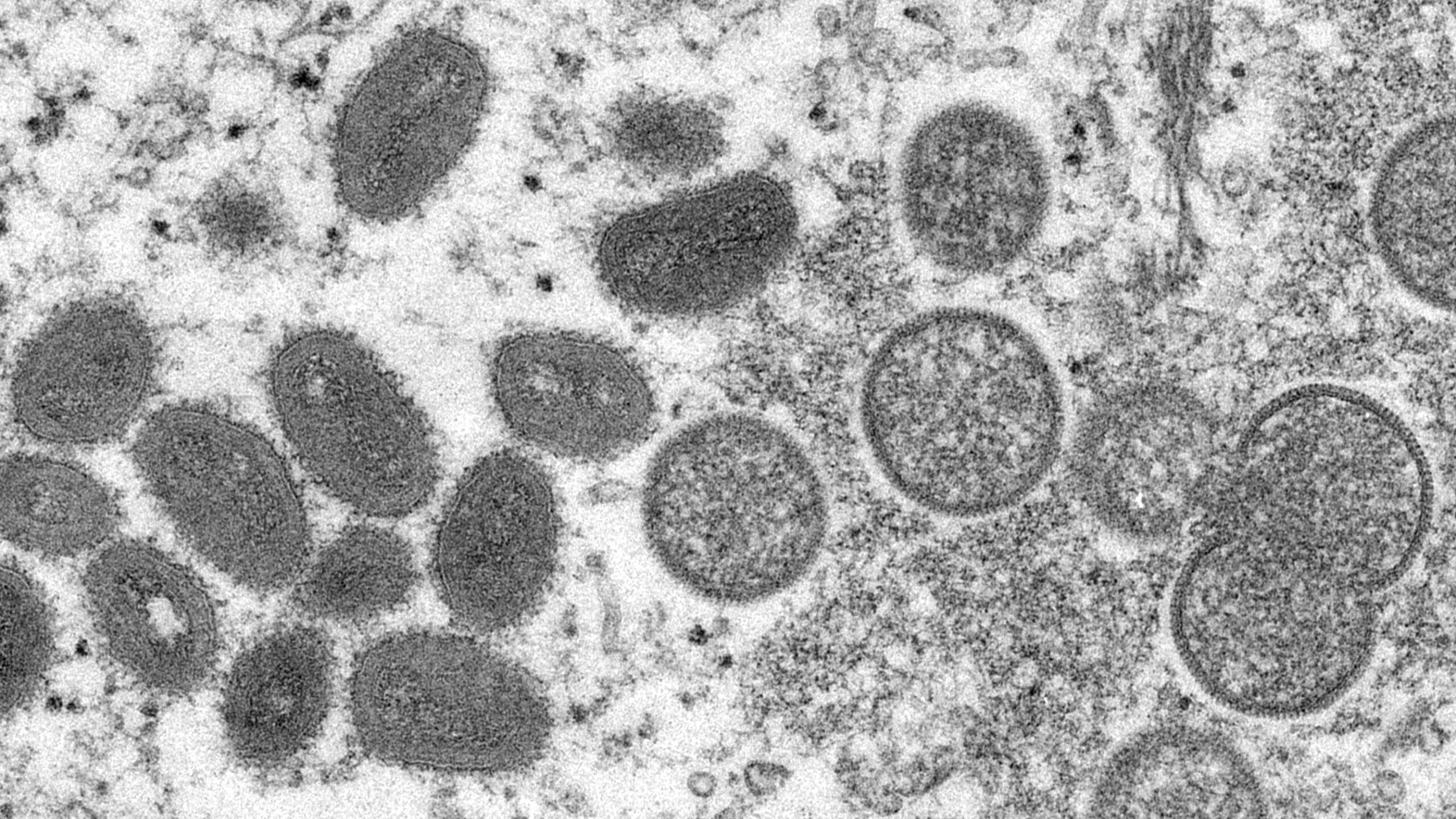 FILE - This 2003 electron microscope image made available by the Centers for Disease Control and Prevention shows mature, oval-shaped monkeypox virions, left, and spherical immature virions, right, obtained from a sample of human skin associated with the 2003 prairie dog outbreak. U.S. health officials are expanding the group of people recommended to get vaccinated against the monkeypox virus. They also say they are providing more monkeypox vaccine, working to expand testing, and taking other steps to try to get ahead of the outbreak. (Cynthia S. Goldsmith, Russell Regner/CDC via AP, file)

The U.S. Centers for Disease Control and Prevention (CDC) now reports there are six monkeypox cases in Minnesota.

The first case, contracted by someone who traveled to Europe, was confirmed Monday. Additional reported cases followed later in the week.

“We’re watching it very closely, and for the general public, the concern is generally low,” Jennifer Heath, with the Minnesota Department of Health (MDH), said earlier this week. “But we do want people to be aware this is circulating.”

Friday, MDH urged Minnesotans to be aware of the rising number of cases and exercise caution.

“It’s clear that monkeypox has come to Minnesota,” State Epidemiologist Dr. Ruth Lynfield said. “While our current cases are associated with travel outside Minnesota, we expect we will soon see cases among people who have no travel history or contact with someone who did, indicating that spread within social networks in Minnesota is occurring. We also think that many people with cases nationally are not seeking medical attention and that the number of people experiencing monkeypox is higher than the reported cases. We want to make sure that at-risk Minnesotans and their health care providers are informed about monkeypox – how it spreads, what the symptoms are and how to prevent its spread.”

Health officials are urging people to learn the symptoms, which according to the World Health Organization (WHO), can start with a fever, intense headache, swollen lymph nodes, muscle aches, and fatigue, then lesions can develop.

“It appears to happen because of close skin to skin, intimate contact from somebody who’s got a lesion, a monkeypox lesion, to somebody who doesn’t,” Dr. Gregory Poland, an infectious diseases expert with the Mayo Clinic, said.

Poland said monkeypox can also spread via respiratory droplets and infected bedding or clothing. The risk of contracting the illness isn’t as severe as other viruses or diseases, however, Poland said.

Federal health officials are now taking steps to try and slow the spread of the virus. Vaccination and testing efforts are being discussed by the CDC and Biden administration.

While six cases is still a low number for the state, health officials say they don’t believe all affected patients have gotten tested or assessed by a health care provider, and they’re worried the number of cases could rapidly grow.

Anyone who thinks they may be infected is urged to quickly get medical care, and MDH is telling Minnesotans to talk to a health care provider if you have a new rash or other concerning symptoms, especially if you have been in contact with someone who has had a rash.

MDH says none of the Minnesotans with cases are currently hospitalized and all are receiving medical care and recovering.

View a CDC map of cases in the U.S. here.