After mounting calls from state lawmakers and community members, late Thursday, authorities released the body camera footage related to the fatal police shooting of a man in a Minneapolis apartment earlier this week.

Amir Locke, 22, was killed after Minneapolis police officer Mark Hanneman shot him in the midst of serving a search warrant in connection with a St. Paul homicide case early Wednesday morning. Police revealed Thursday night that  Locke was not named in that search warrant.

Content warning: The following video is unredacted and contains graphic scenes and strong language that some viewers may find offensive.

The video has not been edited from how its original form was provided by the Minneapolis Police Department.

If you are unable to view the video above, click here. 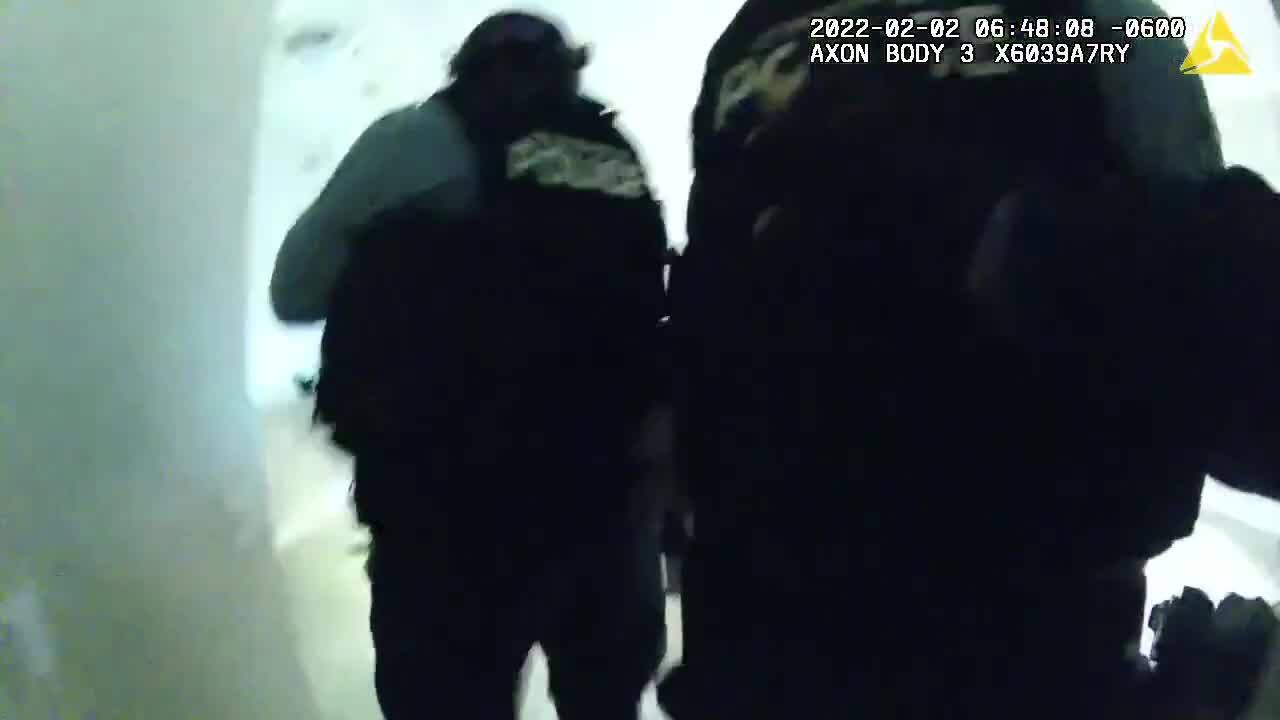 Body camera footage shows officers entering an apartment on the morning of Wednesday, February 2, 2022 in Minneapolis.

In a press conference just after the release of the body camera footage, Huffman asserted that the officers announced their presence before entering the apartment amid repeated questioning that the video appeared to show that officers did not do so.

“I definitely encourage everyone to view the video and make that assessment for themselves,” Huffman replied.

Wednesday, Huffman said Locke was a suspect and that the gun was pointed at officers. The video appears to show that the gun is pointed toward the floor. When asked about the discrepancy, Huffman said the video does not show all the officers in the frame. When pushed further on the topic, she said that will be up to county prosecutors to decide when reviewing the case.

Civil rights attorney Nekima Levy Armstrong, who is co-chair of the Community Safety Workgroup, interrupted the conference, calling their words “the anatomy of a cover-up” and pointed out the differences between the narrative from Frey and MPD over the past few days in comparison to the video while calling for better transparency.

After Frey took the podium again, members of the crowd asked a few questions, again bringing up inconsistencies between the video and the city’s narrative.

We want to get things right,” Frey said. “We want to gather the necessary evidence to make sure that we are not telling  you something that is inaccurate now only to correct it a day later.”

Huffman returned to the podium and said that it was “unclear if or how Mr. Locke is connected to St. Paul’s investigation, and more information will be coming as St. Paul —” and she is cut off by more questions from the crowd, some asking why Locke was referred to as a suspect in a previous press release from MPD.

An aide then called the end of the press conference.

The room grew loud and there was no attempt to restore decorum, one man yelling, “how is walking out of a press conference transparency?” as Frey and Huffman left the room.

Hanneman was hired by MPD in August of 2015. He previously worked as a police officer in Hutchinson, where he started in 2010. Records show that he has three previous complaints that were closed with no discipline.

The Minnesota Bureau of Criminal Apprehension is investigating the shooting, and the Hennepin County Medical Examiner’s Officer is expected to release a full report regarding the nature and cause of Locke’s death.