A Minneapolis police officer shot and killed a man while executing a search warrant Wednesday morning at a downtown apartment building.

The shooting happened at 6:48 a.m. on the seventh floor of Bolero Flats apartments, 1117 South Marquette Avenue. A Minneapolis SWAT team was carrying out the warrant on behalf of the St. Paul Police Department in connection with a homicide investigation, interim Police Chief Amelia Huffman said in a news conference.

Officers used a key fob to get into the apartment, and as they were walking through the entryway, they “loudly and repeatedly yelled, ‘Police search warrant,'” according to Huffman. Seconds later, those officers encountered a man holding a handgun. He was pointing that gun in the direction of officers “when shots were fired,” according to the interim police chief.

Police say one officer, identified as Mark Hanneman, fired his gun during the incident.

The man who was shot was taken to Hennepin County Medical Center but was later pronounced dead. A Minneapolis Fire Department incident report indicates he had been shot three times: Twice in the chest and once in the right wrist. 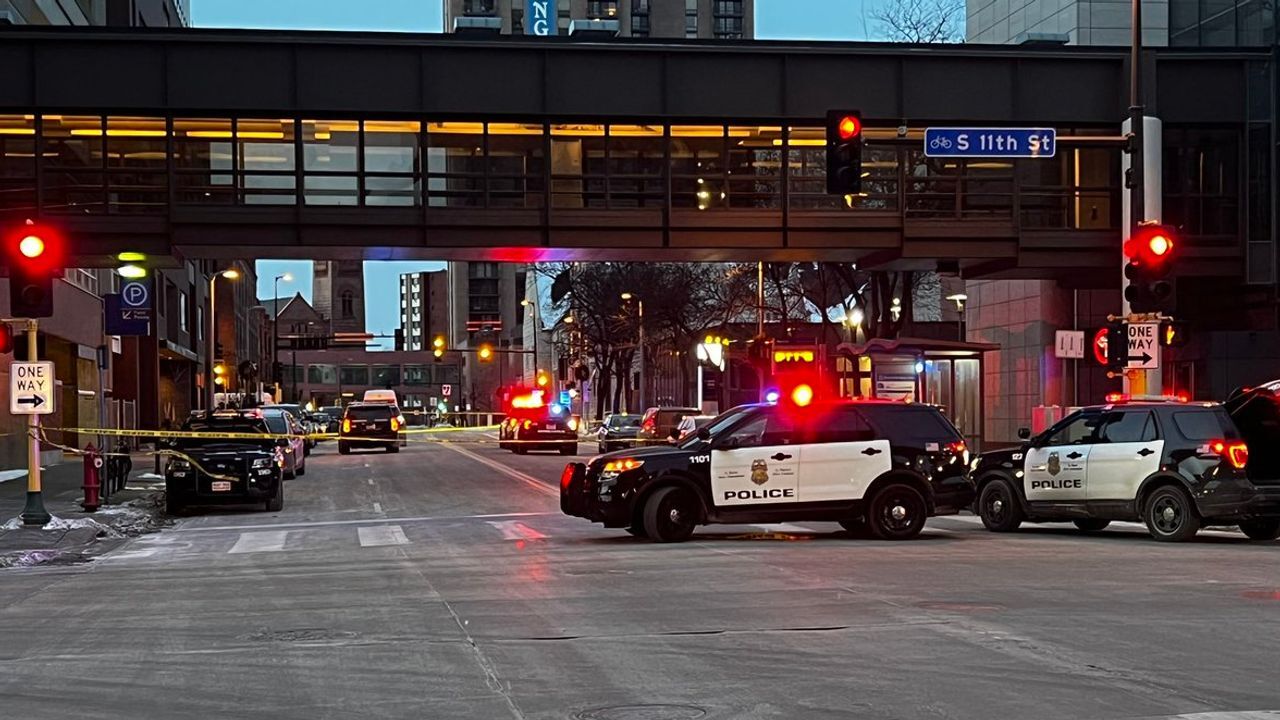 Minneapolis police are at the scene of a shooting incident early Wednesday, Feb. 2, 2022. (KSTP-TV)

A handgun loaded with 5.7 mm rounds was found in the apartment, police said. Images were released Wednesday of the gun police say the man was holding during the shooting.

Huffman did not say whether any officers were injured.

“Our thoughts are with the family and friends who loved the man who lost his life today and with the community because these events are a wrenching loss,” Huffman said. “They’re traumatic not only for those who knew him but everyone who lives in Minneapolis and for the officers who were on the scene as well.”

A news release from the Minneapolis Police Department sent Wednesday afternoon stated that Huffman has viewed the police body camera footage. Investigators have yet to say if or when the body camera video will be released to the public.

The Minnesota Bureau of Criminal Apprehension is investigating the police shooting while the homicide investigation remains in the hands of the St. Paul Police Department.

This is the first deadly police use-of-force incident in Minnesota this year, according to the BCA.

A group of police accountability activists assembled Wednesday evening to denounce the use of force and what they called a “no-knock” warrant.

Michelle Gross, president of activist group Communities Against Police Brutality, speculated that the “pre-dawn raid” startled the man, prompting him to grab the gun to defend himself.

“He was in his apartment minding his own business at 6:30 in the morning when many of us are still in our bed sleeping,” she said. “It was appalling to me that you cannot sleep in your own home without police coming in on a no-knock warrant.”

Civil rights attorney Nekima Levy Armstrong said she was notified of the incident through a phone call with Huffman. She decried the MPD’s decision to carry out the search warrant on behalf of St. Paul police.

“They could have deferred the matter to another agency, or they could have called upon the St. Paul Police Department to carry out its own dirty work,” Levy Armstrong said. “But instead, they act and bloodthirsty by calling in a SWAT team to come inside of this residential building.”

Later Wednesday evening in a Facebook post, Levy Armstrong said she had spoken with family and identified the man shot as Amir Locke, again calling for the body camera footage to be released.

Local activist Toussaint Morrison said the raid was a “reckless” operation and likened the SWAT team to “deputized cowboys shooting wherever they want.” He also said people who live in the apartment building told him officers checked on residents on the floor above because a bullet had gone through the ceiling.

The group also called for the warrant to be unsealed and for all body camera video to be released.

“We have no information from [St. Paul police] about what this warrant even consisted of and why it was so urgent to bust into somebody’s apartment in the wee hours of the morning,” Levy Armstrong said.