On the 50th anniversary of the U.S. Supreme Court’s — since overturned — Roe v. Wade decision, the state’s self-proclaimed “oldest and largest” anti-abortion organization took to the Capitol Mall Sunday afternoon to protest the Protect Reproductive Options (PRO) Act, a bill that would codify abortion access in Minnesota.

The bill passed in the House late last week and is now in the hands of the Senate Rules and Administration Committee. Supporters say it will clear up the legal landscape; opponents, like those at the Capitol, say it goes too far.

Minnesota Citizens Concerned for Life (MCCL) led the march in front of the Capitol Sunday, urging lawmakers to reject “extreme legislation” including the PRO Act.

“Certainly there are many who believe that exceptions for rape and incest and the life of the mother are reasonable exceptions, so we have normally allowed that, but this bill, the PRO Act, does not allow any exceptions. It is completely unrestricted, even up to the moment of birth,” MCCL co-Executive Director Cathy Blaeser said.

“You know, I think the really big picture here is like, this isn’t the role of the government,” Megan Peterson, executive director of the St. Paul-based nonprofit Gender Justice, said in opposition. 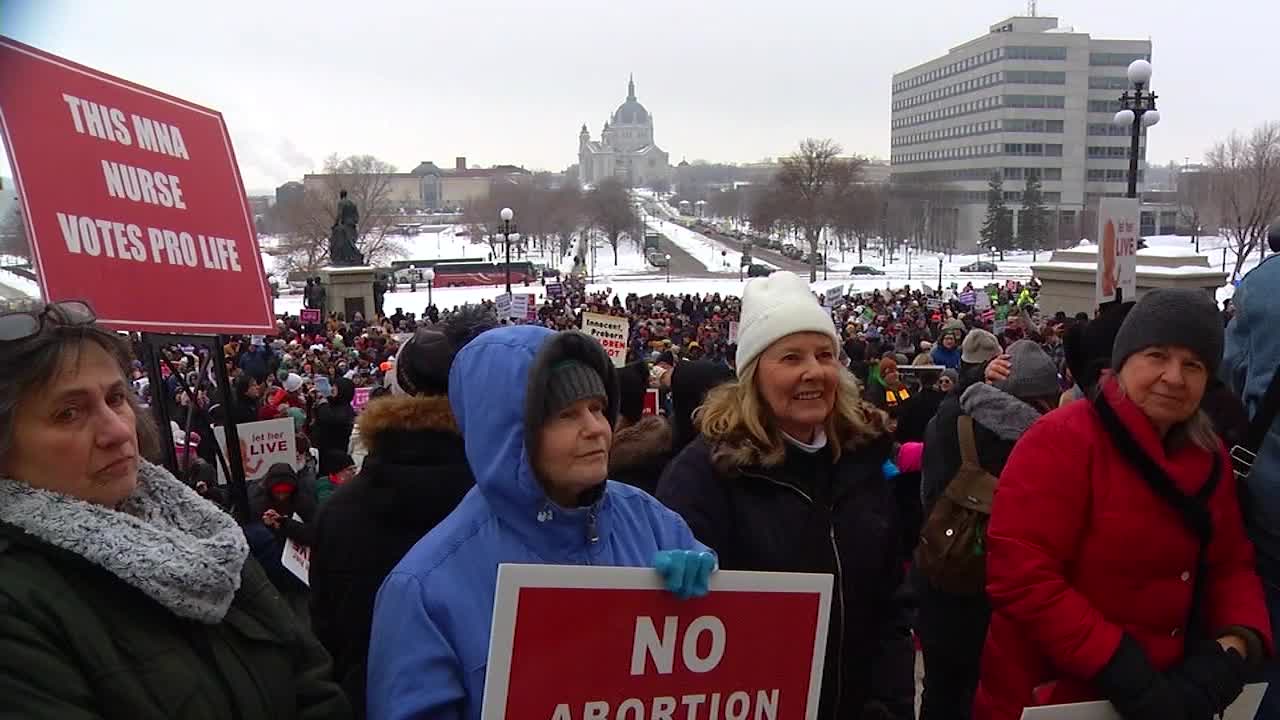 People gathered Sunday at the Minnesota Capitol to protest legislation that would codify access to abortion in the state. (KSTP)

Unlike MCCL, Gender Justice is in support of the PRO Act.

“When the Minnesota Supreme Court said in 1995, in the Doe V. Gomez decision, that it’s not the government’s role to place a thumb on the scale in support of one pregnancy outcome over the other, they recognized that if a government can essentially force someone to stay pregnant, what stops a government in the future from not allowing people to be pregnant or forcing people to get abortions?” Peterson expressed.

Peterson also supports a bill referred to as the Reproductive Freedom Codification Act, which would repeal any remaining statutes that restrict abortion access. She said together, the bills would make it more difficult to pass restrictions in the future.

“We don’t need special laws, kind of singling out abortion as something different from health care,” Peterson argued.

Blaeser, in contrast, believes the government should play a role in pregnancy decisions.

“Well, even the U.S. Supreme Court says that the government has interest in potential life of a human being, the life of a future citizen,” Blaeser said when asked what that role should be.

Even with some clear opposition from the Capitol steps, Peterson said she’s confident the PRO Act will become law.

“That’s in part because Minnesota voters spoke through this election. They spoke at the doors during the campaign season. They spoke when they turned out to vote, and they are crystal clear. They were scared by what happened with the Supreme Court in June,” Peterson said.

Blaeser recognized the challenge of passing anti-abortion legislation with DFL-controlled Legislative and Executive branches, but said she believes the bill, as it stands, to be too “extreme” for Minnesota.

“We have many amendments against this, but with a pro-abortion legislature and a pro-abortion governor, it’s very difficult for us to proactively pass legislation, but Minnesotans do not want such an extreme bill,” Blaeser said.

Check back for updates as 5 EYEWITNESS NEWS follows the PRO Act’s movement in the Minnesota Senate. Click here for more political news.