The defense got its chance to question McMillian late Tuesday afternoon.

Lane’s attorney got McMillian to confirm he didn’t see and hear everything, including Lane calling for emergency personnel, checking Floyd’s pulse or doing chest compressions in the ambulance, pushing back on his statement before the afternoon break that officers didn’t offer any help to Floyd.

While McMillian admitted to missing those items, he reiterated that he didn’t think Floyd was resisting officers, nor was he violent or threatening toward them, and said officers didn’t perform CPR. 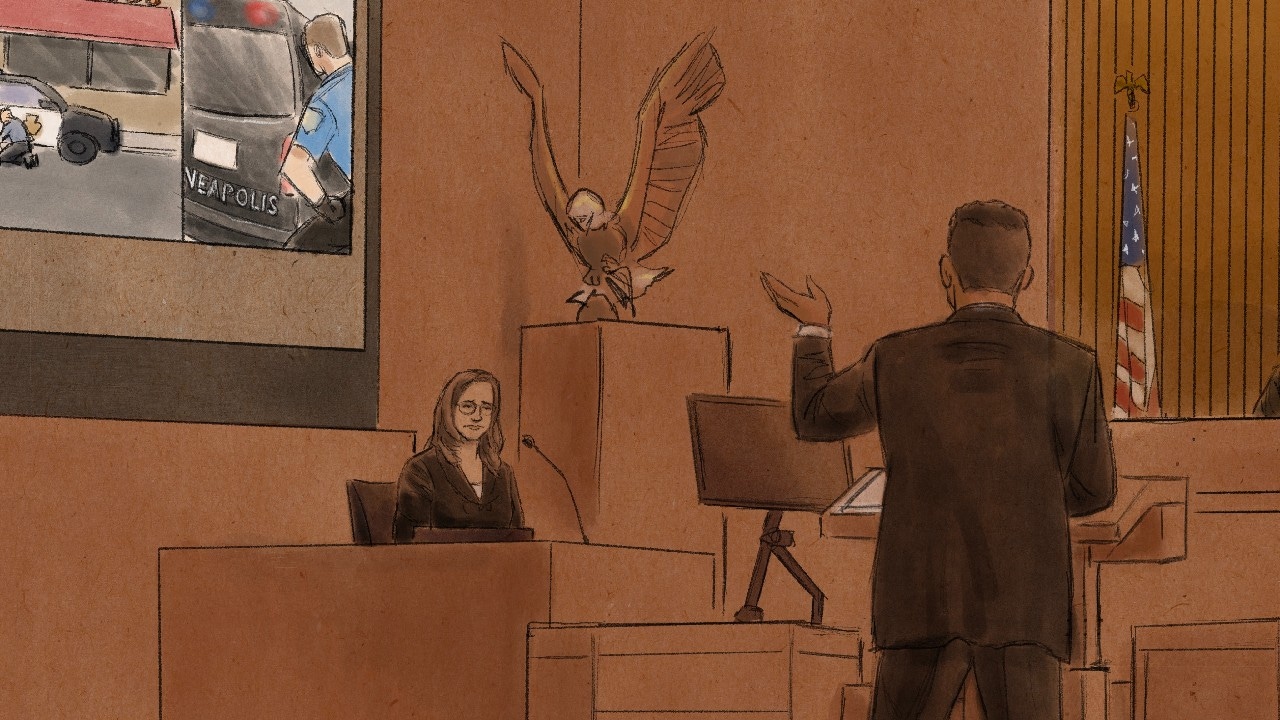 At 3:47 p.m., Minneapolis 911 dispatcher Jenna Scurry took the stand and testified that officers didn’t relay much information to her.

She walked jurors through the dispatch log for the call and explained that officers never relayed information that anyone was having trouble breathing, was unconscious, without a pulse or even being restrained. She noted that the only reason she knew they were restraining someone was because there happened to be a camera available at the intersection and she saw the officers there for so long that she initially believed the camera was frozen.

“My concerns were something had been wrong, whether that be with the officers or the situation,” she added.

Scurry said she was concerned to the point that she called the sergeant to relay those concerns. She also explained that a rescue squad, which typically gets to scenes within three to four minutes, was never requested, mainly because no reason was ever given by officers. The ambulance took seven minutes to get to the scene.

Lane’s attorney, Earl Gray, tried to say Scurry could’ve added a rescue squad by herself but Scurry pushed back, saying the officers would’ve needed to tell her why a rescue squad was needed.

Robert Paule, one of Thao’s attorneys, asked Scurry about what officers are required to tell dispatch. She explained that, while she doesn’t know MPD’s policy, officers are supposed to relay information to dispatchers when a scene changes, which she admitted is frequent and can change in an instant.

Judge Magnuson dismissed court for the day at 5:07 p.m. after reminding jurors to not talk about or watch anything related to the case. Court is set to reconvene at 9:30 a.m. Wednesday.

After Tuesday’s lunch break, defense attorneys got their chance to cross-examine Martin. Martin confirmed to Thao’s attorney that Thao only pushed his coworker because his coworker didn’t listen to Thao’s command to get off the street and onto the sidewalk.

Kueng’s attorney got Martin to confirm 38th Street and Chicago Avenue is a high-crime area and Martin’s manager carried a gun in his pocket.

The next witness called was Charles McMillian, who said he pulled over and watched the situation unfold because he was “being nosy.”

McMillian described for jurors what he saw, noting he told Floyd to just get in the squad car before officers pinned Floyd to the ground but Floyd responded that he’s claustrophobic and wanted to sit in the front of the squad car.

He further explained his concern when officers took Floyd to the ground.

Wiping his eyes, McMillian explained he told officers to “let (Floyd) breathe” when he was pinned to the ground. He also noticed Chauvin’s knee on Floyd’s neck.

“My concern was that I knew something bad was gonna happen to Mr. Floyd … he was gonna die,” McMillian said of his thought upon seeing Chauvin’s knee on Floyd’s neck.

As the situation continued, McMillian said, “My concern increased because I kept hearing this man beg for help.”

When asked if officers offered Floyd any help, McMillian said they gave none.

McMillian is expected to continue being questioned by the prosecution following the afternoon break.

The second witness to take the stand was Christopher Martin, who worked at Cup Foods on May 25, 2020. Martin said he was the employee who accepted the bill he assumed was fake from Floyd, noting he didn’t think Floyd knew it was fake because he seemed high.

Martin and a couple of his coworkers went to Floyd’s vehicle to try to get Floyd and the others to come back inside the store twice but they refused. A store employee then called the police.

Martin also testified that he later heard the crowd of people yelling at Thao to “check his pulse” and saw Thao push two people back onto the sidewalk. Martin said when he looked at Floyd, he looked “dead.”

Judge Magnuson called for a lunch break before the defense cross-examines Martin.

Court is set to reconvene around 2 p.m.

The first full day of witness testimony began with prosecutors playing more videos for the jurors.

Prosecutors played 30 minutes of Kueng’s body camera video from the moment he arrived at the scene. He’s heard telling Floyd, “We’re going to sort all of this out, alright?” and asking if Floyd is “on something because you’re acting real erratic.”

The video also showed Kueng not checking Floyd’s wrist for a pulse until the officers had been kneeling on Floyd for over six minutes.

After Floyd was loaded in the ambulance, Kueng was the officer who went into Cup Foods, talked with the manager about the counterfeit bill and what happened when Floyd was in the store.

Thao’s bodycam video caught him telling a forming crowd on the sidewalk, “This is why you don’t do drugs kids,” as Floyd was on the ground with the officers on top of him.

Judge Magnuson called for a morning break at 10:47 a.m. before the defense takes over questioning the witness Kimberly Meline, an FBI forensic video examiner who synchronized the videos.

The federal trial of three former Minneapolis police officers charged in the death of George Floyd is set to continue Tuesday with the first full day of witness testimony.

After opening statements wrapped up Monday afternoon, the government called its first witness to the stand late in the afternoon but most notably played a nearly 30-minute clip of Thomas Lane’s body camera video.

In the first full day of witness testimony on Tuesday, more bodycam video is expected to be played for the jurors.

This is a developing story. 5 EYEWITNESS NEWS will continue updating this story as the trial proceeds.