Minnesota Gov. Tim Walz has signed hundreds of bills into law, but few generated as much emotion as a bill signing ceremony Wednesday in the Governor’s Reception Room at the Minnesota State Capitol.

The bill was signed in honor of Sen. David Tomassoni, I-Chisholm, who was diagnosed with ALS in June.

“He and his family have served the Iron Range for decades,” Gov. Walz said before signing the bill. “They are a family name, a well-known household name in northern Minnesota, and now that’s true across Minnesota.”

The bill will provide grants of $20 million for research for treatments and a cure for amyotrophic lateral sclerosis, also known as Lou Gehrig’s disease. Another $5 million will be used to help families and patients with caregiving when fighting this debilitating illness.

“Thank you, Gov. Walz, for your support and for signing the bill,” Tomassoni said Wednesday through the use of an electronic device because he can no longer speak. He also praised his family for making it possible for him to continue his work in the Senate. He choked back tears as his message played. “All have become my hands, my voice, basically my means of communication and mobility. Without them, I would not be able to do my job.” 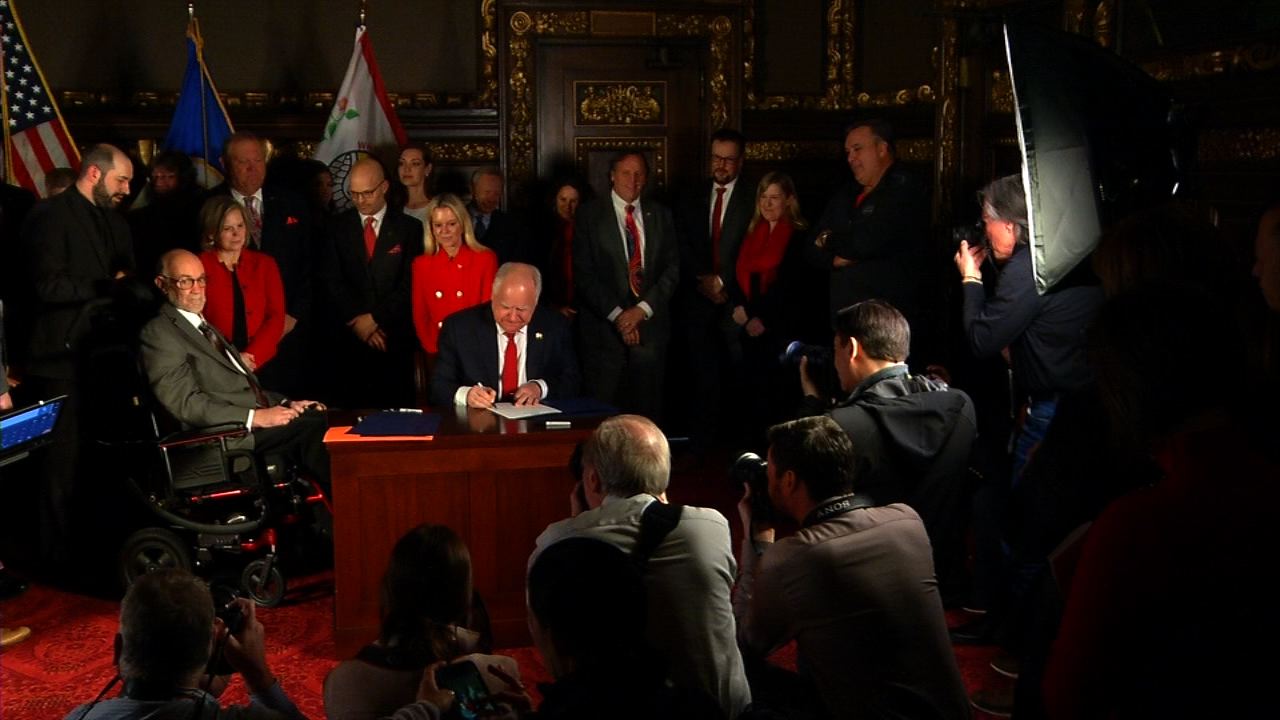 Minnesota Gov. Tim Walz, center, signs a bill that will provide $25 million in ALS research grants and caregiver support next to Sen. David Tomassoni, left, the bill's chief author. Tomassoni has been battling ALS since his diagnosis in June. (KSTP)

As for his colleagues in the House and Senate who unanimously passed the funding bill knowing it will likely help future ALS patients more than Tomassoni, he expressed his appreciation.

“This is about making the future better,” Tomassoni said. “We can all be proud of that. This is truly a good day.”

Another emotional moment came when Tomassoni’s closest friend in the Senate, Sen. Tom Bakk, I-Cook, shared details of the moment Tomassoni told him last June he has ALS.

“And he said, ‘Tom, they told me there’s nothing they can do.’ And my hope — and I know David’s hope for the bill — is that someday somebody’s friend or family member’s going to be able to come over after a diagnosis and say there’s something they might be able to do.” The room erupted in applause as Bakk’s eyes watered.

Tomassoni’s history is quintessentially Minnesotan with doses of Iron Range and hockey in the mix. He played high school hockey at Chisholm High School, played four years for Denver University, including in two Frozen Fours, and played on the 1984 Olympic hockey team for Italy. He even played against Wayne Gretzky in a 1982 international tournament. He proudly displayed a picture of that in his office.

Republicans and Democrats in both the House and Senate respect Tomassoni for his sense of fair play and sense of humor, even after leaving the Senate DFL caucus to become an independent and caucus with Republicans. Republicans even elevated him to Senate president last year after he made the switch.

On Wednesday his sense of humor was on display amidst the tears when he recounted his conversation with Gov. Walz after he learned of his ALS diagnosis.

“You know, the governor called me shortly after my diagnosis and told me he would support whatever I wanted,” Tomassoni said. “I received similar assurances from Speaker Hortman and Majority Leader Miller. Maybe I should have asked for more.”

The room erupted in laughter, just the way Tomassoni likes it, even while he wages his battle with ALS.