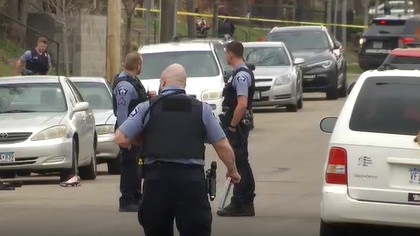 The Minneapolis Police Department (MPD) is investigating a fatal shooting in north Minneapolis, marking the third homicide reported in the city on Friday.

It’s the 31st death investigated as a homicide in Minneapolis in 2022, and the third fatal shooting in under 24 hours in the city.

A news release from MPD said officers responded to reports of shots fired and a person down near the intersection of 33rd Avenue of James Avenue North at about 4:40 p.m. Police arrived and found a man in his early 20s with potentially life-threatening gunshot wounds. He was taken to the hospital, where he later died despite lifesaving surgical efforts.

The news release states that several guns were fired in a possible exchange of gunfire. The man shot reportedly fled a short distance and collapsed in the street. Vehicles then reportedly sped from the area.

Another fatal shooting was reported in the same area just before midnight late Thursday evening.

The Hennepin County Medical Examiner will release the man’s name along with the official cause of death.