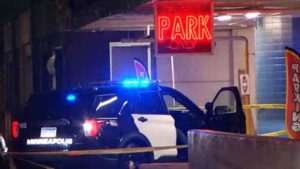 Court documents filed in Hennepin County allege 45-year-old Otis Givens shot 24-year-old Ariana Bradley in the back of the head on May 8, 2021, on the first floor of a parking garage at South Ninth Street and LaSalle Avenue.

A criminal complaint states that prior to the deadly shooting, a woman accidentally shot an “acquaintance” in the leg in a nearby alley. The woman said she meant to shoot a man who had displayed a handgun. That man left with Bradley.

Givens then took the gun from the woman who fired the first shot and walked into the same parking garage as the couple who left the alley. Surveillance footage shows that Givens passed the man who displayed a handgun, approached the victim and shot her in the back of the head as she tried to run away. The criminal complaint states that Givens then left the parking garage and returned to the alley, as shown in surveillance footage from the scene.

A witness in the alley said he heard two gunshots before Givens returned to the alley. The witness said he knew Givens by the name “Popeye” and that he said, “I got at ’em,” after those gunshots were heard.

The criminal complaint states that the woman who fired the shot in the alley and allowed Givens to take the gun also left the area with him. While at a gas station in north Minneapolis, Givens said to the woman “I can’t believe that I shot that girl.” Up to that point, the woman said she was unaware that Givens had shot anyone.

Court documents also state that clothing worn by Givens matched what was seen in surveillance footage, and that his credit card was used at a nearby bar. Givens was also found to have “Popeye” tattooed on his chest.

His sentencing date is currently set for Sept. 7.