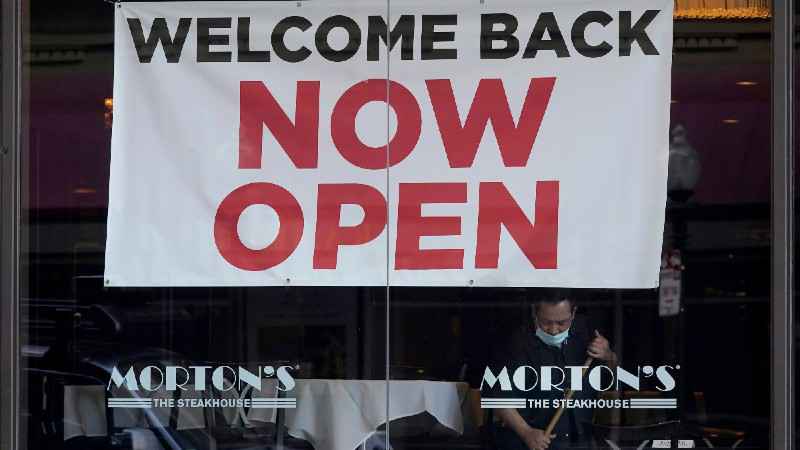 FILE - In this March 4, 2021, file photo, a sign reading "Welcome Back Now Open" is posted on the window of a Morton's Steakhouse restaurant as a man works inside during the coronavirus pandemic in San Francisco. California added 141,000 jobs in February as more than a quarter of a million people returned to the workforce. The California Employment Development Department said Friday, March 26, that the state's unemployment rate in February was 8.5%, down from 9% in January.[AP Photo/Jeff Chiu, File]

The number of Americans applying for unemployment benefits rose by 61,000 last week to 719,000, signaling that many employers are still cutting jobs even as more businesses reopen, vaccines are increasingly administered and federal aid spreads through the economy.

The Labor Department said Thursday that the number of claims increased from 684,000 the week before. Though the pace of applications has dropped sharply since early this year, they remain high by historical standards: Before the pandemic flattened the economy a year ago, jobless claims typically ran below 220,000 a week.

All told, 3.8 million people were collecting traditional state benefits during the week ending March 20. If you include federal programs that are meant to help the unemployed through the health crisis, 18.2 million people were receiving some type of jobless aid in the week that ended March 13.

Economists monitor weekly applications for unemployment aid for early signs of where the job market is headed. Applications generally reflect the rate of layoffs, which normally fall steadily as a job market strengthens. During the pandemic, though, the numbers have become less reliable as states have struggled with application backlogs and allegations of fraud have clouded the actual volume of job cuts.