Top Dems: We have framework to pay for $3.5T bill; no detail 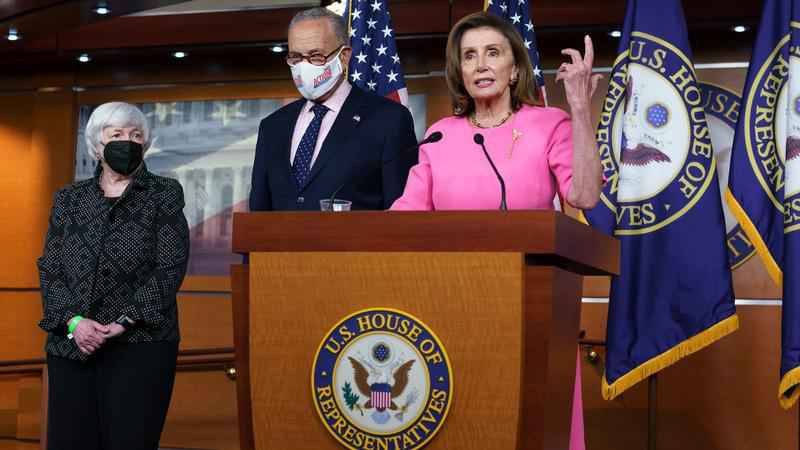 The White House and congressional Democrats have agreed to a "framework" to pay for their huge, emerging social and environment bill, top Democrats said Thursday, but they offered no details and the significance was unclear.

Senate Majority Leader Chuck Schumer of New York and House Speaker Nancy Pelosi of California announced the development as Biden administration officials and Democratic congressional leaders negotiated behind the scenes on the mammoth package of spending and tax initiatives.

Democratic leaders and President Joe Biden have wanted the measure to total some $3.5 trillion over 10 years.

But the party has been divided over the final size and many of the details, and there has been no public word that agreements have been reached on any of those crucial questions. Republicans are solidly opposed to the package, and Democrats will be able to push it through Congress only if they limit their defections to three House members and none in the Senate.

"The White House, the House and the Senate have reached agreement on a framework that will pay for any final negotiated agreement," Schumer told reporters at a news conference with Pelosi and Treasury Secretary Janet Yellen.

The statements by Schumer and Pelosi left unclear whether the administration and congressional bargainers had made decisions actually paring down their options for financing the bill, or were simply working off a broad menu of options that had already existed. Also unclear was whether the "framework" was a step toward resolving the myriad disputes between rank-and-file party moderates and progressives that have slowed work on the legislation, and there was no initial public indication that it had.

Schumer later told reporters that he, Pelosi and the chairs of the Senate and House tax-writing committees had agreed to options that could be used to finance the bill when lawmakers decide on its overall price tag.

In separate remarks, Schumer, House Ways and Means Committee Chairman Richard Neal and Senate Finance Committee Chairman Ron Wyden each suggested that the list of possibilities largely came from revenue proposals that Neal’s panel has approved and that Wyden has proposed. They provided little detail.

"It’s hardly conclusory, but it was a good step of progress," Schumer said.

Underscoring the questions that the leaders’ announced "framework" raised, other top Democrats expressed ignorance about it.

Asked whether he expected to have the revenue outline shared with him soon, Senate Budget Committee Chairman Bernie Sanders, I-Vt., told reporters, "If there is a framework, yes." Sanders has been in the middle of talks on Democrats’ fiscal plans all year.

"We’ve been through this a million times, so there are many, many approaches as to how you can raise money in a fair and progressive way, and raise at least three and a half trillion dollars. If that’s what the menu is, then nothing particularly new, I think," Sanders said.

The leaders’ comments also came with the House planning to begin considering a separate $1 trillion package of road and other infrastructure projects on Monday. Pelosi has agreed to that schedule to assuage party moderates who badly want that legislation passed but are leery of supporting the larger $3.5 trillion measure.

Progressives are threatening to defeat the smaller public works measure, and it is unclear whether Democrats can push it through the closely divided House. To win over progressives and make sure both bills can pass, Democratic leaders are trying to reach an agreement on a final version of the huge social and environmental bill that moderates would support.

That bill incorporates much of Biden’s domestic agenda. It includes a sweeping overhaul of federal taxes and spending to make what the president views as overdue investments in health care, family services and efforts to fight climate change.

The measure would impose tax hikes on corporations and wealthy Americans earning beyond $400,000 a year and plow that money back into federal programs for young and old, along with investments to tackle climate change.

Pelosi said, "What we said was the House, the Senate and the White House came to an agreement on how we can go forward in a way to pay for this."

White House press secretary Jen Psaki called the framework "a menu and a range of options" and said it represented progress.

"The next step is to have a discussion with a range of members about the path forward," she said.

Moderate Democrats, most prominently Sens. Joe Manchin of West Virginia and Kyrsten Sinema of Arizona, have demanded that the $3.5 trillion price tag be reduced.

Democrats have proposed paying for the measure mostly with tax increases on the rich and corporations. But lawmakers have disagreed over details of those levies, and other disputes remain over initiatives to boost health care, climate change and other proposals.

Pelosi and Schumer addressed reporters a day after Biden met with over 20 Democrats in an effort to narrow their differences, including Manchin and Sinema.

Meanwhile, the House and Senate remained at a standstill over a separate package to keep the government funded past the Sept. 30 fiscal year-end and to suspend the federal debt limit to avert a shutdown and a devastating U.S. default on payments. Senate Republicans are refusing to back the House-passed bill.

The Democratic-led House passed the funding-and-debt measure Tuesday night, but Republicans are refusing to give their support in the Senate, despite the risk of triggering a fiscal crisis.

Senate Republican leader Mitch McConnell has said since Democrats control the White House and Congress, it’s their problem to find the votes — though he had relied on bipartisan cooperation to approve debt limit measures when Republicans were in charge.

But in the 50-50 Senate, Democrats will be hard-pressed to find 10 Republicans to reach the 60-vote threshold needed to overcome a filibuster. Other options to try to pass the debt ceiling package could be procedurally difficult.