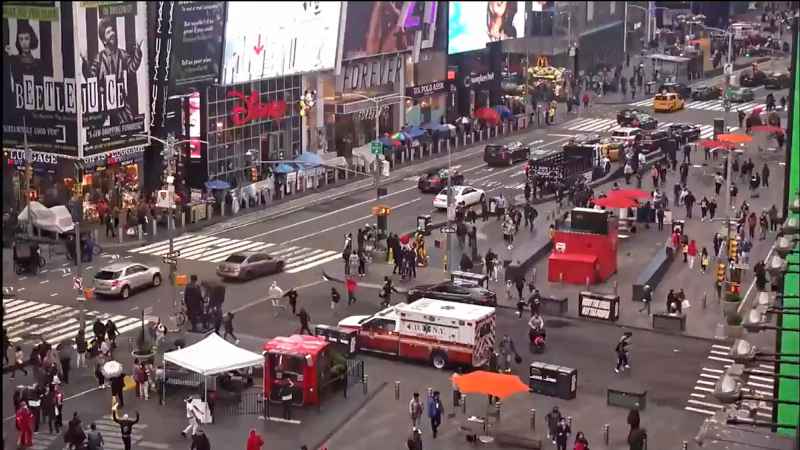 In this image taken from video by the FDNY, pedestrians hurry away from the scene of a shooting in Times Square, Saturday, May 8, 2021, in New York. New York City police say three innocent bystanders including a 4-year-old girl who was toy shopping have been shot in Times Square and officers are looking for suspects. All the victims are expected to recover.[FDNY via AP]

A man suspected of shooting three bystanders in New York’s Times Square was arrested Wednesday in Florida, four days after the gunfire wounded people including a 4-year-old girl out toy shopping in the tourist haven known as "the “Crossroads of the World.”

Farrakhan Muhammad was taken into custody while eating lunch in a McDonald’s parking lot near Jacksonville, police said.

“While there is no joy today, there is justice,” New York City Police Commissioner Dermot Shea said.

Muhammad, 31, was listed Wednesday in an inmate database for the sheriff’s office in Bradford County, Florida. Information on a lawyer who could speak on his behalf was not immediately available.

Muhammad is suspected of wounding the three victims with stray bullets during a dispute in Times Square at about 5 p.m. Saturday.

Muhammad was apparently aiming for his brother, but investigators haven’t yet pinpointed the motive, chief of detectives James Essig said. He said the brothers apparently both sold CDs in the Times Square area.

Police released videos and photos of Muhammad and asked the public for help tracking him down. His family made a public plea for him to turn himself in.

Officers identified Muhammad as a suspect within hours and soon realized he was heading south, Essig said.

Video then captured Muhammad and a woman, believed to be his girlfriend, buying dog food and other supplies at a store in Fayetteville, North Carolina. Meanwhile, investigators realized he had connections to some addresses in Florida.

A U.S. Marshals Service fugitive task force caught up with the two on Wednesday as they were eating in a car outside a McDonald’s in Starke, Florida, police said. Two dogs were with the two.

Muhammad had shaved off some of his hair, Essig said.

The woman has not been arrested on any charges, but police noted their investigation was continuing.