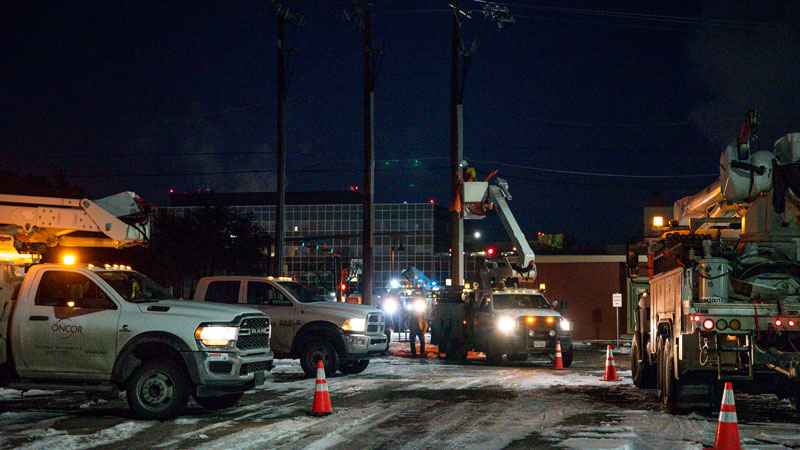 In this Feb. 18, 2021, file photo, an Oncor Electric Delivery lineman crew works on repairing a utility pole that was damaged by the winter storm that passed through Odessa, Texas. Texas officials on Thursday, March, 25, 2021 raised the death toll from February's winter storm and blackouts to at least 111 people — nearly doubling the state's initial tally following one of the worst power outages in U.S. history.[Eli Hartman/Odessa American via AP, File]

Texas officials on Thursday raised the death toll from February’s winter storm and blackouts to at least 111 people — nearly doubling the state’s initial tally following one of the worst power outages in U.S. history.

The frigid weather also was blamed for dozens of more deaths across other Southern states including Arkansas, Oklahoma, Tennessee, Kentucky and Alabama.

The majority of the Texas deaths are associated with hypothermia, according to the Texas Department of State Health Services. And the dramatic number of new victims is still a potential undercount, as officials continue investigating deaths that happened around the time the storm knocked out power to more than 4 million customers in Texas.

Many homes went without power or drinkable water for days after subfreezing temperatures, failing power plants and record demand for heat pushed Texas’ electric grid to the breaking point.

Texas officials earlier this month put the initial tally of deaths at 57 but warned it would increase. The toll now officially exceeds that of Hurricane Harvey in 2017, which was blamed for 68 deaths in Texas.

The list of victims from the February snowstorm cut a wide swath across the state of 30 million people: Some fatalities were nearly as far north as Oklahoma, while others were close to the U.S.-Mexico border. State officials said the causes of "multiple deaths" included motor vehicle accidents, carbon monoxide poisoning, medical equipment failures, exacerbation of chronic illness, lack of home oxygen, falls and fire.

The most confirmed deaths occurred around Houston, where Harris County officials have reported at least 31 victims.

Among them was Gilbert Rivera, 60, who told relatives after the power went out in his garage apartment that he was cold but staying bundled up. Rivera, who had worked for about two decades as a custodian, had a learning disability but reveled in his independence and chose to live on his own.

Lawrence Ibarra, his 44-year-old nephew, said that after being unable to reach Rivera since the day earlier, his father went out on Houston’s treacherously icy and snowy roads to check on him. When he arrived at Rivera’s apartment, he found his brother bundled up and dead on the floor.


Ibarra said his father told him: "I think he froze to death."

The autopsy determined the cause of death was hypothermia, which occurs when one’s body loses heat faster than it can produce it.
Ibarra noted that the temperature in his own house —which also lost power— had dropped to 37 F (3 C).

The body first tries to generate heat by shivering and boosting one’s heart rate, but if internal temperatures keep dropping, that slows and the body will restrict blood circulation to extremities to maintain blood in the core and keep internal organs warm.

"As people get colder, their mental status can change, and they can become unresponsive and not think as clearly," said Dr. Deborah Diercks, chair of emergency medicine at UT Southwestern in Dallas.

Rivera’s family is among dozens who have filed a lawsuits against electricity providers and the state’s embattled power grid, the Electric Reliability Council of Texas. The disaster led to a congressional investigation and the ouster of ERCOT CEO Bill Magness.

Next week, the Texas House is expected to vote on a package in response to the storm, including efforts to winterize power plants. On Thursday, ERCOT announced that projections show a "low risk" for blackouts during Texas’ sweltering summer months, when demand on the system is typically highest.