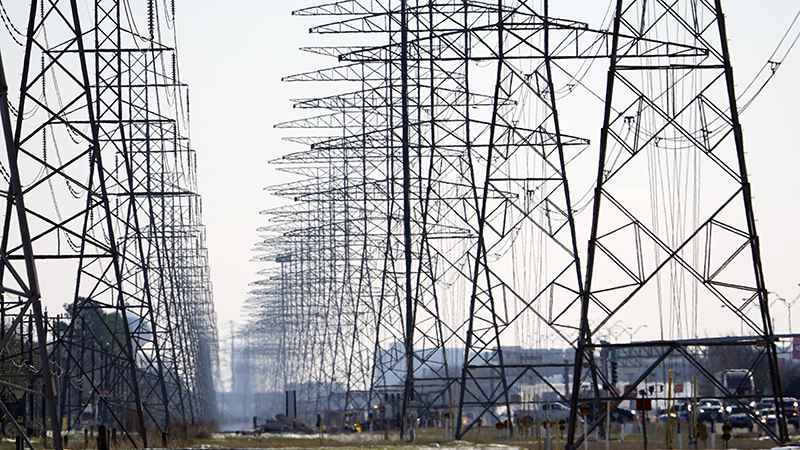 Power lines are shown Tuesday, Feb. 16, 2021, in Houston. More than 4 million people in Texas still had no power a full day after historic snowfall and single-digit temperatures created a surge of demand for electricity to warm up homes unaccustomed to such extreme lows, buckling the state's power grid and causing widespread blackouts. [David J. Phillip/Associated Press]

With millions of Texas residents still without power amid frigid temperatures, conservative commentators presented a false narrative that wind turbines and solar energy were primarily to blame.

“This is a perfect example of the need for reliable energy sources like natural gas & coal,” tweeted U.S. Sen. Steve Daines, a Republican from Montana, on Tuesday.

In reality, failures in natural gas, coal and nuclear energy systems were responsible for nearly twice as many outages as frozen wind turbines and solar panels, the Electric Reliability Council of Texas, which operates the state’s power grid, said in a press conference Tuesday.

‘A complete bungle’: Texas’ energy pride goes out with cold

Still a variety of misleading claims spread on social media around renewable energy, with wind turbines and the Green New Deal getting much of the attention.

A viral photo of a helicopter de-icing a wind turbine was shared with claims it showed a “chemical” solution being applied to one of the massive wind generators in Texas. The only problem? The photo was taken in Sweden years ago, not in the U.S. in 2021. The helicopter sprayed hot water onto the wind turbine, not chemicals.

Other social media users, including Republican U.S. Rep. Lauren Boebert of Colorado, puzzlingly labeled the Green New Deal as the culprit. Boebert tweeted on Monday that the proposal was “proven unsustainable as renewables are clearly unreliable.”

But the Green New Deal is irrelevant, as no version of it exists in Texas or nationwide, said Mark Jacobson, director of the Atmosphere/Energy Program and professor of civil and environmental engineering at Stanford University.

“It’s really natural gas and coal and nuclear that are providing the bulk of the electricity and that’s the bulk of the cause of the blackouts,” Jacobson told The Associated Press.

ERCOT said Tuesday that of the 45,000 total megawatts of power that were offline statewide, about 30,000 consisted of thermal sources — gas, coal and nuclear plants — and 16,000 came from renewable sources.

On top of that, while Texas has ramped up wind energy in recent years, the state still relies on wind power for only about 25% of its total electricity, according to ERCOT data.

“It’s not like we were relying on it to ride us through this event,” Joshua Rhodes, a research associate at the Webber Energy Group at the University of Texas at Austin, told the AP. “Nor would it have been able to save us even if it were operating at 100% capacity right now. We just don’t have enough of it.”

The agency confirmed that wellhead freeze-offs and other issues curtailing supply in natural gas systems were primarily to blame for new outages on Tuesday, after severe winter weather caused failures across multiple fuel types in recent days.

Renewable energy is a popular scapegoat for new problems as more frequent extreme weather events strain infrastructure, according to Emily Grubert, an assistant professor of Civil and Environmental Engineering at Georgia Institute of Technology.

“It’s easy to focus on the thing that you can see changing as the source of why an outcome is changing,” Grubert told the AP. “The reality is that managing our systems is becoming more difficult. And that’s something that is easy to blame on the reaction to it, but it’s not actually the root cause.”