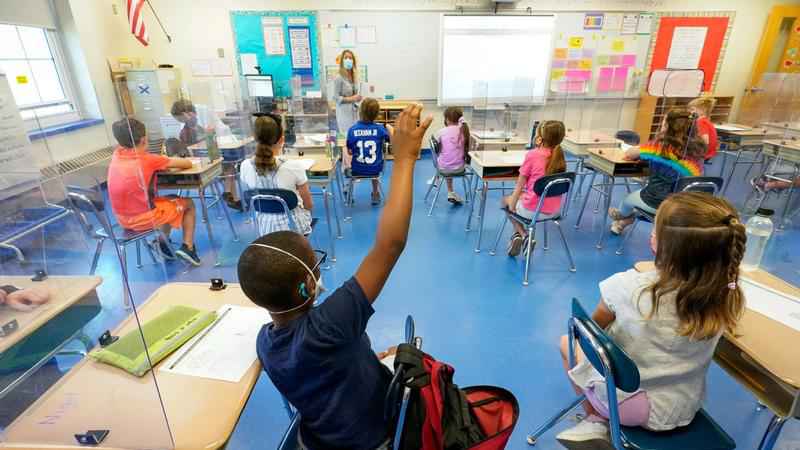 In this May 18, 2021, file photo, a teacher, center, and her third grade students wear face masks and are seated at proper social distancing spacing during as she conducts her class in Rye, N.Y. In response to a push for culturally responsive teaching that gained steam following last year's police killing of George Floyd, Republican lawmakers and governors have championed legislation to limit the teaching of material that explores how race and racism influence American politics, culture and law. The measures have become law in Tennessee, Idaho and Oklahoma and bills have been introduced in over a dozen other states. [AP Photo/Mary Altaffer]

As middle school teacher Brittany Paschall assembled a lesson plan on the history of the Negro Baseball Leagues, she wondered how she might have to go about it differently next year under a new Tennessee state law that prohibits teaching certain concepts of race and racism.

The unit was about baseball, but more importantly, it was about segregation and racism in America.

"I kept thinking, in light of this bill, if this were next year, how would I teach this to my students?" said Paschall, an English teacher in Nashville. "Do we teach students to ignore tough subjects?"

Laws setting guiderails for classroom instruction on race passed this year in Republican-controlled states have left some teachers worried about how they will be enforced. Particularly in districts with large numbers of people of color, educators say they worry everyday discussions about students’ experiences could land teachers in hot water.

In response to a push for culturally responsive teaching that gained steam following last year’s police killing of George Floyd, Republican lawmakers and governors have championed legislation to limit the teaching of material that explores how race and racism influence American politics, culture and law. The measures have become law in Tennessee, Idaho and Oklahoma and bills have been introduced in over a dozen other states.

Professional teachers associations and some school boards have blasted the laws as disrespecting teachers’ judgment and opening the door to censorship.

"This is an assault on the craft of teaching," said Paschall, who is Black. "It’s asking me to show up and ignore parts of my own identity."

The Tennessee law that takes effect July 1 allows the state education commissioner to withhold funds from any school found to be in violation. Among other things, Tennessee’s teachers can’t instruct that "an individual, by virtue of the individual’s race or sex, is inherently privileged, racist, sexist, or oppressive, whether consciously or subconsciously."

The law still permits ‘impartial discussion of controversial aspects of history,’ but teachers are uncertain how to square that with the main thrust of the legislation, as state officials begin working on finalizing rules on how to implement the new law.

Among the written responses shared anonymously by the council, one of the teachers who said it would not affect their teaching wrote: "Telling students of color they are discriminated against will only serve to make the students feel victimized. This has no place in schools."

The bills in various states limit the teaching of ideas linked to "critical race theory," which seeks to reframe the narrative of American history. Its proponents argue that federal law has preserved the unequal treatment of people on the basis of race and that the country was founded on the theft of land and labor.

In the Oklahoma City school district of Millwood, where over 70% of students are Black, Superintendent Cecilia Robinson-Woods said teachers were confused by the implications of the new law’s ban on saying certain people are inherently racist or oppressive, whether consciously or unconsciously.

She said one young Black teacher assigned a project around an issue students want to solve in their community and they came back with topics including gentrification, Jim Crow, mass incarceration and the Tulsa race massacre.

"This is what these kids are thinking about. To say you can’t talk about this, it’s impossible," Robinson-Woods said.

After the new law passed, the teacher asked the superintendent if the project meant he was teaching critical race theory. She told him students in the district’s K-12 schools aren’t being taught such concepts.

"What you should be doing is having student led-discussions that are balanced," Robinson-Woods said she told the teacher. "So if kids are interested in learning about Green Book, then yeah, they need to learn about Jim Crow as well."

"We’re not doing anything differently because we don’t believe we’re teaching critical race theory," she added.

The new law was condemned by school boards in Millwood as well as Oklahoma City, where the board chair, Paula Lewis, said it was a measure in search of a problem because there have been no examples of somebody telling a student they are a white supremacist or an oppressor because of their skin color.

Still, she said, teachers are apprehensive about crossing a line.

"In our mind, it really just adds a layer of fear," she said.

Tennessee teachers also are eager to see how the new law is interpreted by state officials.

Bianca Martinez, a sixth-grade English teacher in Memphis, points to the difficult conversations her students brought up last year when the class read "Brown Girl Dreaming," a young adult novel on growing up Black in the 1960s in South Carolina and New York.

"In my lesson plans, I didn’t have language that said ‘critical race theory,’ ‘systematic racism,’ or ‘privilege’," she said. "But those conversations came up and they’re going to continue to happen."

"My question is, how are you going to police that?" Martinez said. "And what does violating the measure mean?"