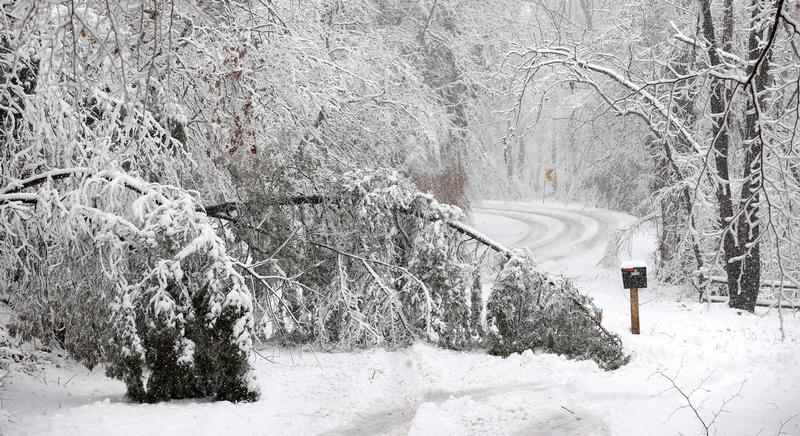 Winter weather is playing havoc not only with road travel but also passenger trains in Virginia and other states.

Amtrak’s Crescent, which left New Orleans on Sunday on its way to New York got stuck near Lynchburg on Monday morning, returned to the Virginia city and remained there Tuesday. Officials said downed trees were blocking the tracks.

Tuesday morning, passengers still aboard the train told The Atlanta Journal-Constitution they were without food, functioning toilets and information from the railroad as to what happens next.

"All we’ve been told is there are trees on the tracks preventing us from moving forward," passenger Sean Thornton said Tuesday. "Nobody has eaten for about 20 hours and the toilets in coach are completely backed up. The snack bar sold out of food yesterday. Passengers have been banned from leaving the train."

Amtrak says the train is supposed to complete its trip to New York, which was scheduled to end on Monday, once the tracks are clear.

"Our staff is working to make sure food and water is available for customers," spokesperson Kimberly Woods wrote in an email.

Amtrak told WSET-TV that passengers can leave the train.

A separate train bound from Roanoke, Virginia, to Washington, D.C., got stuck on the same tracks, said Tamera Ferguson of Lynchburg. She said her son spent 14 hours on the train before it returned to Lynchburg after 1 a.m. Tuesday. She said the railroad didn’t offer stranded passengers other transportation or hotels.

The Daily Progress of Charlottesville reported a train southbound from Charlottesville to Lynchburg had also been delayed due to downed trees, while Amtrak reported that its New York-bound Silver Star train, which left Miami, remained stopped at Richmond Tuesday morning because of downed trees.

A number of New York-New Orleans Crescents departing on Tuesday and later days have been canceled. Amtrak also canceled both directions of the Piedmont, which runs between Raleigh, and Charlotte in North Carolina on Tuesday, as well the northbound Palmetto from Savannah, Georgia, to New York, and the northbound Auto Train, which operates from Sanford, Florida, to Lorton, Virginia.

The company also said it’s operating "modified" service on some other routes on the Northeast Corridor between Washington and Boston and on other trains south of Washington.