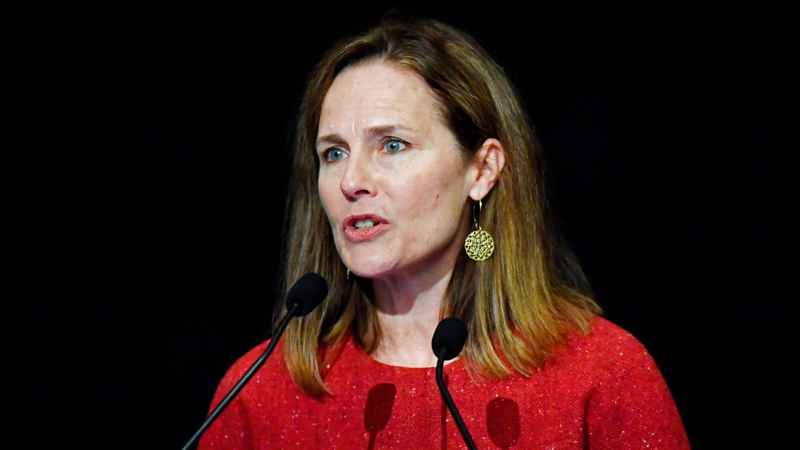 In this Sept. 12, 2021, file photo U.S. Supreme Court Associate Justice Amy Coney Barrett speaks to an audience at the 30th anniversary of the University of Louisville McConnell Center in Louisville, Ky. Barrett’s confirmation was arguably the most political of any member of the court. She was confirmed on a 52-48 vote, the first in modern times with no support from the minority party. [AP Photo/Timothy D. Easley, File]

The justices have reason to be concerned. Recent polls show a sharp drop in approval of a court now dominated by conservatives.

The call by justices Clarence Thomas, Stephen Breyer and Amy Coney Barrett for the public not to see court decisions as just an extension of partisan politics isn’t new. But the timing of the recent comments is significant, just after a summer in which conservative majorities on the court prevailed over liberal dissents on abortion, immigration and evictions, and at the start of a blockbuster term.

The future of abortion rights and expansions of gun and religious rights already are on the docket. Other contentious cases could be added. The outcome in each could fracture the court along ideological lines, with the court’s six conservative justices chosen by Republican presidents prevailing over its three liberals nominated by Democrats.

To some observers, the Supreme Court is facing the most serious threat to its legitimacy since its decision in Bush v. Gore two decades ago that split liberals and conservatives and effectively settled the disputed 2000 presidential election in favor of Republican George W. Bush.

“I think we may have come to a turning point. If within a span of a few terms we see sweeping right-side decisions over left-side dissents on every one of the most politically divisive issues of our time — voting, guns, abortion, religion, affirmative action — perception of the court may be permanently altered,” said Irv Gornstein, executive director of Georgetown University’s Supreme Court Institute.

Paul Smith, who has argued before the court in support of LGBTQ and voting rights among other issues, said people are increasingly upset that the ”court is way to the right of the American people on a lot of issues.”

But views of the court have dipped before, then rebounded, from a public that doesn’t pay too much attention to the court’s work and has trouble identifying most of the justices.

Tom Goldstein, the founder of the court-focused SCOTUSblog website who argues frequently before the justices, doubts this time will be any different. He says the court "has built up an enormous font of public respect, no matter what it does.”

Still, Thomas, Breyer and Barrett took aim at the perception of the court as political in recent speeches and interviews.

Breyer, the court’s eldest member at 83 and leader of its diminished liberal wing, has spoken for years about the danger of viewing the court as “junior league politicians.”

But he acknowledged it can be difficult to counter the perception that judges are acting politically, particularly after cases like the one from Texas in which the court by a 5-4 vote refused to block enforcement of the state’s ban on abortions early in pregnancy. The majority was made up of three justices appointed by President Donald Trump and two other conservatives, with the three liberals and Chief Justice John Roberts in dissent.

“It’s pretty hard to believe when a case like those come along that we’re less divided than you might think,” Breyer said in an interview earlier this month with The Washington Post.

“My goal today is to convince you that this court is not comprised of a bunch of partisan hacks,” the Trump nominee said in a talk in Louisville, Kentucky, at a center named for Senate Republican leader Mitch McConnell of Kentucky, who was sitting on the stage near the justice.

McConnell engineered Barrett’s swift confirmation just days before last year’s presidential election and little more than a month after the liberal icon, Justice Ruth Bader Ginsburg, died. Barrett’s confirmation was arguably the most political of any member of the court. She was confirmed on a 52-48 vote, the first in modern times with no support from the minority party.

McConnell’s push to confirm Barrett in the final days before the election stood in contrast to his decision to hold open the seat held by Justice Antonin Scalia when Scalia died months before the election in 2016 and President Barack Obama, a Democrat, sought to name a replacement.

In an appearance a few days after Barrett’s, Thomas said the justices themselves were to blame for shifting perceptions of the court by taking on roles that properly belong to elected officials. “The court was thought to be the least dangerous branch and we may have become the most dangerous,” he said at the University of Notre Dame, where Barrett taught law for many years.

Three new polls, all conducted after the court’s Texas abortion vote, have shown sharp drops in approval of the court. Just 40% of Americans approve of the court, according to the latest Gallup poll. That’s among the lowest it’s been since Gallup started asking that question more than 20 years ago. Approval was 49% in July.

The change in the composition of the court and the controversies over Trump’s three nominees have prompted calls from liberal interest groups to expand the court and institute term limits for the justices, who have lifetime tenure under the Constitution.

At the moment, those changes seem unlikely to succeed. But one group, Demand Justice, said this past week that it is planning to spend more than $100,000 on advertising in the coming weeks to promote the idea of court expansion. And a court reform commission established by President Joe Biden is supposed to issue a report by November.

Some court-watchers think the efforts of the liberal groups, rather than the court’s actions, are responsible for changing views of the justices.

“I do think there’s a sustained campaign to delegitimize the court that has gotten some traction on the left,” said Roman Martinez, a Washington lawyer who regularly argues before the court.

At one point of another, most of the justices have talked about the importance of the court maintaining its legitimacy and the need for justices to rise above partisanship.

“Every single one of us needs to realize how precious the court’s legitimacy is. You know we don’t have an army. We don’t have any money. The only way we can get people to do what we think they should do is because people respect us,” Justice Elena Kagan said at a Princeton University event around the time of Kavanaugh’s confirmation.

A couple of months later, Roberts spoke up in defense of judicial independence, but he did so to combat criticism of judges from Trump. After Trump described a judge who ruled against him as a biased “Obama judge,” Roberts memorably tangled with the president.

Roberts said: “We do not have Obama judges or Trump judges, Bush judges or Clinton judges. What we have is an extraordinary group of dedicated judges doing their level best to do equal right to those appearing before them.”