Omicron surge vexes parents of children too young for shots 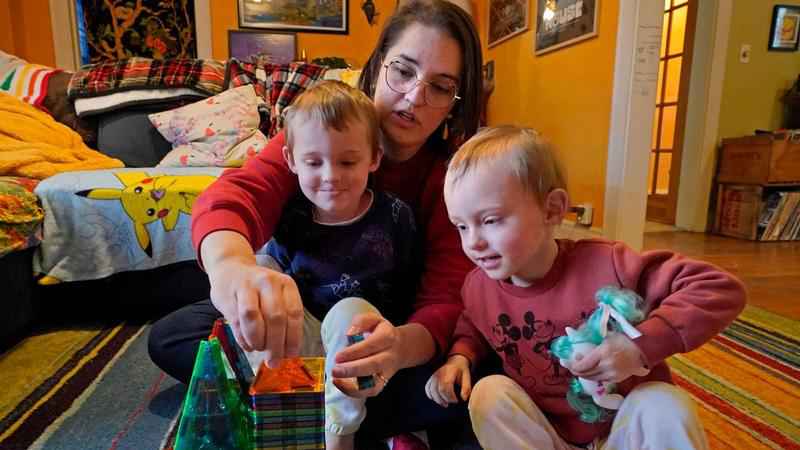 Heather Cimellaro, builds a toy house with her twins, Milo, left, and Charlie, at their home, Wednesday, Jan. 5, 2022, in Auburn, Maine. Heather Cimellaro is one many parents concerned about the omicron surge and the dilemma it's posing for families of children too young to be vaccinated.[AP Photo/Robert F. Bukaty]

Afternoons with Grammy. Birthday parties. Meeting other toddlers at the park. Parents of children too young to be vaccinated are facing difficult choices as an omicron variant-fueled surge in COVID-19 cases makes every encounter seem risky.

For Maine business owner Erin Connolly, the most wrenching decision involves Madeleine, her 3-year-old daughter, and Connolly’s mother, who cares for the girl on the one day a week she isn’t in preschool.

It’s a treasured time of making cookies, going to the library, or just hanging out. But the spirited little girl resists wearing a mask, and with the highly contagious variant spreading at a furious pace, Connolly says she’s wondering how long that can continue “and when does it feel too unsafe.’’

Connolly, of West Bath, said she worries less about Madeleine and her 6-year-old vaccinated son getting the virus than about the impact illness and separation would have on the grandparents. But she’s also concerned about her vaccinated parents contracting breakthrough cases.

Although health experts say omicron appears to cause less severe disease and lead to fewer hospitalizations, its rapid spread indicates that it is much more contagious than other variants. Nearly 718,000 COVID cases were reported Tuesday, according to the federal Centers for Disease Control and Prevention. Omicron is currently the culprit in more than 90% of U.S. cases, a dizzying rise from less than 10% two weeks ago.

"The sheer volume of infections because of its profound transmissibility will mean that many more children will get infected,’’ Dr. Anthony Fauci said Wednesday at a White House briefing.

COVID cases in U.S. children and teens nearly doubled in the last two weeks of December, totaling nearly 326,000 in the final week alone, according to a report from the American Academy of Pediatrics and the Children’s Hospital Association.

The omicron-fueled surge has also put children in the hospital in record numbers: During the week of Dec. 27, 2021, to Jan. 2, 2022, an average of 672 children 17 and under were admitted per day to hospitals with the coronavirus — more than double the number from the previous week. Children still represent a small percentage of those being hospitalized, however.

Fauci, the country’s top infectious disease doctor, said surrounding children with vaccinated adults is one way to keep them from contracting the virus. Health officials also reiterate that face masks prevent transmissions, and putting them on children 2 and older in public and group settings can help keep them safe.

Connolly, 39, and her mother had a difficult conversation Tuesday morning about the dilemma.

“Will Madeleine be masked?” her mother asked. “I said, ‘We’re trying, but I don’t know if she will,’’’ Connolly recalled. “I said, ‘Does that mean that Thursdays with Grammy will go away?’ She said, ‘I’m not sure yet,’’’ Connolly said, choking back tears.

Parents who had hoped the new year might bring a COVID vaccine for young children had a setback when Pfizer announced last month that two doses didn’t offer as much protection as hoped in youngsters ages 2 to 4.

Pfizer’s study has been updated to give everyone under age 5 a third dose, and data is expected around the end of March or beginning of April, a company scientist told U.S. officials Wednesday.

Researchers were disappointed by the setback, said Dr. Yvonne Maldonado, who is leading Stanford University’s Pfizer vaccine studies in children under 12.

Maldonado said she understands the frustration of parents with young children, but that she advises them to avoid unnecessary travel during this current surge, and to make sure their day care centers, preschools and other care providers are requiring masks and taking other recommended precautions.

Watching omicron’s spread, Honolulu resident Jacob Aki is contemplating forgoing a first birthday party for his 10-month-old son. Celebrating the milestone is important in his native Hawaiian culture. The tradition stems from a time before the measles vaccine was available, when it was a feat to reach one’s first birthday. The family also canceled plans to experience snow in Canada. Meanwhile, every cough and sniffle is provoking anxiety.

“Babies normally get sick at this age,” Aki said. “But with everything with COVID … anxiety is high.”

Heather Cimellaro, a technology teacher from Auburn, Maine, says she worries more than ever about keeping her 3-year-old identical twin boys healthy. One has had medical issues related to their premature birth and the family makes regular trips to Boston to see a specialist.

“COVID can really throw a wrench in those plans,’’ Cimellaro said.

Cimellaro, 33, says omicron has her rethinking running errands with the twins, library storytime visits, even preschool, located in a health center for the elderly. She worries the boys could catch COVID and spread it to their "grand-buddies.”

“It’s just a lot of worry: ‘Am I doing the right thing?’’’ she said. “That’s the thing. I’m not an epidemiologist. I don’t know how dangerous it is for them. So it’s kind of like that debate with myself.’’

Erin Stanley of Berrien Springs, Michigan, said she and her husband have curtailed their social lives because of omicron to help protect their 3-year-old son, Ralph. They are both vaccinated and boosted, but they worry about Ralph getting sick and spreading illness to his younger cousin, preschool classmates, grandparents and a beloved great-grandmother.

They didn’t see the great-grandmother over Christmas and skipped a holiday get-together with other relatives too.

“That was upsetting," Stanley said. "We all really wanted to. It just seemed risky.’’

Stanley, 35, a cook at a popular organic farm, used to take Ralph grocery shopping, a trip he looked forward to and that represented one of his few social interactions outside preschool. But few shoppers wear masks, she said, and now that seems too risky as well.

“Getting the swab test was really traumatic for him," said Stanley, who added that “virus” and “swab” are now part of his vocabulary.