Officer says he failed to record arrest of Iowa journalist 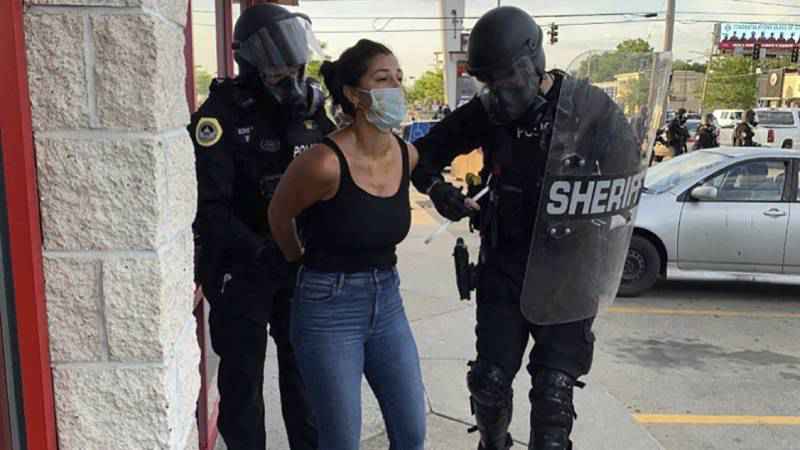 An Iowa journalist covering a protest for racial justice was temporarily blinded after a police officer shot pepper spray at her and then jailed despite telling him repeatedly that she was just doing her job, according to video played Tuesday at the reporter’s trial.

Body camera video captured by Des Moines Police Sgt. Natale Chiodo showed Des Moines Register reporter Andrea Sahouri in custody on May 31, 2020, her eyes burning from pepper spray. She said she was with the newspaper and asked Officer Luke Wilson why he was arresting her, adding that she was in pain and couldn’t see.

"This is my job," Sahouri says on the video. "I’m just doing my job. I’m a journalist."

Sahouri’s defense played the video for jurors on the second day of a trial in which Sahouri and her former boyfriend, Spenser Robnett, are charged with failure to disperse and interference with official acts. The prosecution has drawn widespread criticism from media and human rights advocates, who say that the charges are an attack on press freedom. The pair face fines and potentially even jail time if convicted.

Officer Wilson testified that he failed to record the arrest on his body camera and did not notify a supervisor as required by department policy. But Chiodo’s body camera captured the scene shortly after Wilson detained Sahouri.

Chiodo said he did not arrest a second Register reporter with Sahouri, Katie Akin, because she wasn’t disobeying orders and "seemed very scared," telling her to leave instead.

Akin testified that she was surprised to see an officer pepper spray and arrest Sahouri because "I didn’t understand us to be breaking any laws or doing anything wrong." Akin said she began yelling to police that they were journalists and showing a press badge.

The Freedom of the Press Foundation called the video powerful evidence that Sahouri "was arrested while doing her job reporting on historic protests."

Des Moines Register executive editor Carol Hunter testified that the newspaper assigned Sahouri to cover the protest at Merle Hay mall days after the death of George Floyd, a Black Minneapolis man who was declared dead after a white officer put his knee on his neck for about nine minutes. Hunter said Sahouri did her job "very well" that night, reporting observations and images of the event live on Twitter.

Hunter said Sahouri did not violate newspaper policy by allowing her boyfriend to join her at the event, which she said made sense given that it was a dangerous situation. She said the paper had not issued any formal credentials to Sahouri and that employees only had security badges at that time, which were optional to carry. Authorities have said Sahouri wasn’t wearing press credentials.

Wilson, an 18-year veteran of the Des Moines Police Department, said he responded to the protest and found a "riotous mob" that was breaking store windows, throwing rocks and water bottles at officers, and running in different directions. He said his unit was told to clear a parking lot, and he used a device known as a fogger to blanket the area with clouds of pepper spray.

He said the chemical irritants worked in forcing most of the crowd to scatter, including Robnett, but that he decided Sahouri needed to be arrested when she did not leave. Wilson said he was unaware that Sahouri was a journalist.

Wilson said that he grabbed her with his left hand while his fogger was in his right hand. Wilson said that Robnett returned and tried to pull Sahouri out of his grasp, and Wilson said he deployed more pepper spray that "incapacitated" Robnett.

Sahouri was taken to jail in a police van and released hours later.

Under cross-examination by defense attorney Nicholas Klinefeldt, Wilson said that he charged Sahouri with interference because she briefly pulled her left arm away while he was arresting her. He acknowledged that he didn’t mention that claim in his police report on the arrest.

Wilson said that he only rarely used his body camera during his normal job at the city airport, wrongly believed it had recorded Sahouri’s arrest and was unfamiliar with the details of the department’s body camera policy.

The cameras are always capturing video when on and can retrieve video of incidents that were not recorded afterward if they have not yet been erased. Officers who fail to record incidents they should have are required to notify supervisors, who can then try to recover video that does not have audio.

Prosecutors say Sahouri and Robnett ignored a police order to leave the area that was broadcast over a public address system about 90 minutes before their arrests.

The defense argues that order was intended only to clear an intersection where protesters were blocking a squad car. Akin, the Register reporter who wasn’t arrested, testified that she didn’t have the impression that she was supposed to leave and continued her reporting.

Body camera video played in court showed officers yelling at protesters to get out of the intersection and instructing them to be peaceful. Robnett and Sahouri complied.

A separate order to disperse could be heard faintly on the video in the background — so quiet that even an officer testifying for the prosecution seemed to struggle to make it out. But prosecutors argued the message was louder at the scene.