Nebraska’s quandary: Can it force more citizens to work? 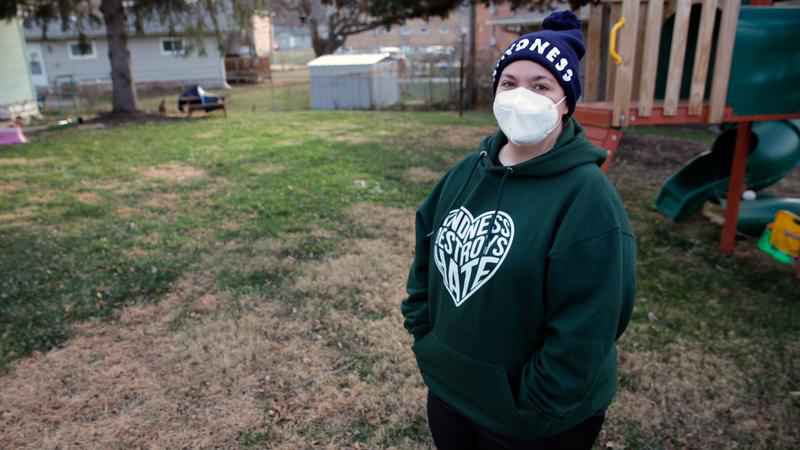 Sonja Redding, an unemployed mother of two, stands outside her home in Omaha, Nebraska on Monday, Dec. 6, 2021. Redding has been trying to find a job, but it's difficult because she feels she needs to stay at home to care for her children who have special needs and are particularly vulnerable to viruses. [AP Photo/Stephen Groves]

Even in normal times, Nebraska has one of the lowest unemployment rates in the nation, with fewer than two million people and plenty of jobs to go around. But with some workers slow to return to work after COVID-19 shutdowns, the state has hit new depths, recording the country’s lowest-ever state unemployment rate of 1.8% in November.

Now Gov. Pete Ricketts, who frequently expounds on the value of work, is confronting an intriguing question: Can a governor force citizens to work, even if they apparently aren’t eager or able to do so?

Ricketts is certainly trying every option imaginable to get Nebraskans into jobs, including requiring people to confer with job coaches before seeking unemployment benefits.

"There’s going to be a lot of different things we’re going to have to do to reach each individual and, if they’re not working for whatever reason, get them back into the workforce," Ricketts said recently.

Unemployment rates are low in many places, and as the national rate fell to 4.2%, officials across the country are struggling to convince people who have stopped looking for work to seek jobs.

A full workforce is needed to keep businesses functioning and support local economies, but it’s hard to overstate the difficulty of uprooting people who are caring for family members, exploring other life options or who just want to take a break.

Ricketts is determined to try with policies that make it more trouble to stay home.

"Jobs help create great financial independence for Nebraskans and their families, giving them the dignity to achieve their dreams," said the two-term Republican governor, who is part of the Ricketts family, whose estimated $4.5 billion in wealth originated with the creation of the online brokerage Ameritrade.

Ricketts’ first move was to require people seeking unemployment benefits to meet with a job coach, discuss specific employment goals and enroll in an "individualized reemployment plan." The state added tougher requirements for maintaining benefits and for contacting employers to apply for openings.

Nebraska also was one of the first to end supplemental federal assistance for workers hit by the pandemic.

Nebraska has about 49,000 job openings listed on a state website and 19,000 working-age residents who are not working. About 4,300 people are receiving unemployment benefits.

Among the unemployed is Sonja Redding, an Omaha mother whose daughter and son have autism and methylmalonic acidemia, a rare autoimmune disease that makes them exceptionally vulnerable to viruses.

Redding previously worked as a reseller and ran her own booth at a flea market but stopped after the pandemic hit. She has survived on federal stimulus money, unemployment, Social Security income and her own savings, but lately has reduced her spending "to a bare minimum" so she can stay home with her children.

"I would love to get back to work," she said. "I’m a normal parent and would like to have time away from my kids sometimes, but this is what we’ve got to do right now. It’s definitely draining."

Redding said employers she’s talked to want her to come into the office.

Other reasons some people aren’t working include concerns about being infected with the coronavirus, said Dave Swenson, an economics professor at Iowa State University. Burnout is another factor, particularly among health care workers and teachers.

Swenson questions the effectiveness of Ricketts’ efforts because most people without jobs aren’t getting jobless aid, he said.

Still, there is no question that Nebraska businesses are hurting for workers.

"It’s their No. 1 challenge, their No. 2 challenge and their No. 3 challenge," said Bryan Slone, president of the Nebraska Chamber of Commerce and Industry.

In a chamber survey, more than 90% of chamber members identified worker shortages as their biggest concern.

"I would hire 150 people right now if I could," said Bryan Seck, the company’s chief talent management strategist.

Lincoln’s unemployment rate before the pandemic was 3.8%, but now it’s closer to 1.3%. Kawasaki has begun offering more consistent hours, an $18.10 starting hourly wage and a tuition reimbursement program.

Mitch Tempus, the owner of two Fernando’s Cafe & Cantina restaurants in the Omaha area, said he’s been trying unsuccessfully to lure back some of the servers and bussers he laid off last year, even offering raises that increased his labor costs by more than 20% and brought average wages up to $13 or $14 an hour.

And with new hires, "It’s even hard retaining them," he said. "Sometimes people will work for two or three days and then we never see them again."

Pat Keenan, who manages three chain hotels in North Platte, Nebraska, said he’s given up plans to open a restaurant near one hotel because "the chances of us getting it staffed are almost zero."

He added, "I would call 2021 the year of the hourly employee," he said. "They have more power than they’ve had and more money than they’ve ever had."

Keenan said it’s time for the federal government to come up with an immigration reform plan that would allow more immigrants to work legally in the United States.

"I think we’re back at the stage where we need an influx of hard-working people again," Keenan said. "I hate to say it, but it feels like a lot of existing Americans feel a little entitled and have lost their work ethic."