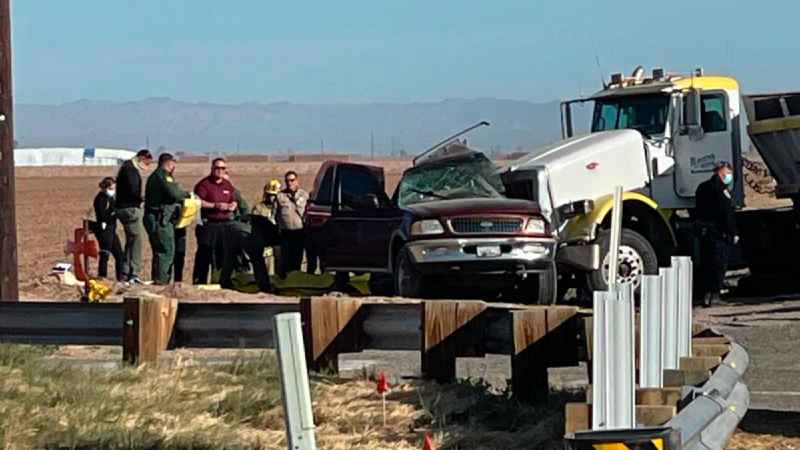 In this image from KYMA law enforcement work at the scene of a deadly crash involving a semitruck and an SUV in Holtville, Calif., on Tuesday, March 2, 2021.[KYMA via AP]

A Mexican man was charged Tuesday with coordinating a smuggling effort that left 13 people dead when their overloaded SUV was struck by a big-rig after crossing the border into California.

Jose Cruz Noguez, 47, of Mexicali, was arrested on Monday night as he crossed into the United States at the Calexico Port of Entry. He appeared Tuesday in federal court in El Centro and faces conspiracy and smuggling charges involving serious injury or placing lives in danger, according to a statement from the U.S. attorney’s office.

He was assigned federal public defenders and ordered held in custody, the statement said.

Prosecutors say Cruz organized a smuggling run in which 25 people were crammed into a 1997 Ford Expedition that drove through a hole cut in a border fence on March 2.

The vehicle was driving through California’s agricultural Imperial Valley when it was broadsided at an intersection near Holtville by a tractor-trailer hauling two empty trailers, authorities said.

The crash site was about 125 miles (200 kilometers) east of San Diego.

Seventeen occupants were Mexican — 10 who died, including the driver, and seven who were injured. Nine had major injuries, including two Guatemalans, authorities said.

The youngest injured was a 15-year-old girl who was treated for major injuries.

Cruz was taken into custody after another suspected smuggler was arrested at a California border station two weeks after the crash. That man said Cruz had offered him $1,000 per passenger to drive the sport utility vehicle that crashed but he declined, according to the criminal complaint.

“These smuggling networks seek maximum profit by moving as many people as possible across the border with zero regard for their safety and well-being,” acting U.S. Attorney Randy Grossman said in the statement. “Cramming dozens of people into eight-passenger vehicles and driving recklessly to avoid detection shows an utter disregard for human life. We will find and prosecute smugglers who use these methods and cause such tragic and avoidable deaths.”

Cruz didn’t enter a plea at Tuesday’s hearing. His arraignment is scheduled for April 27. He could face 20 years or more in federal prison if convicted.