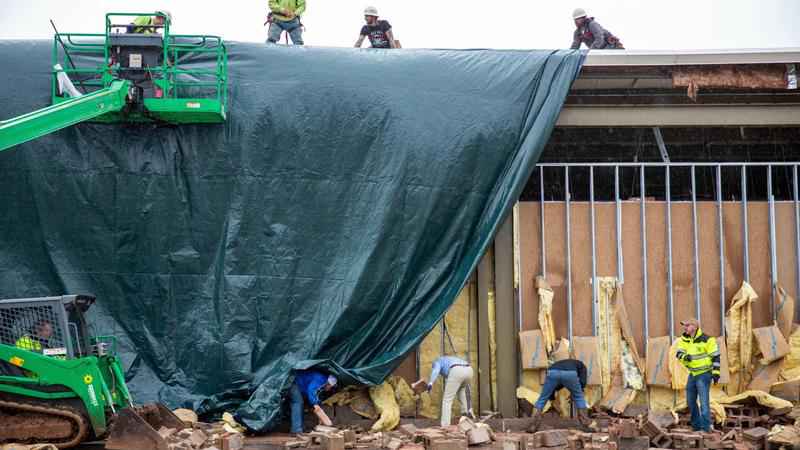 Stewart Richey Electrical employees and other utility workers and city crews help clear debris and put up a large tarp at Thornton Furniture on Cave Mill Road in Bowling Green, Ky., after another tornado warning was issued late Saturday morning, Jan. 1, 2022, for Warren and surrounding counties, following the devastating tornadoes that tore through town on Dec. 11, 2021. Though the damage from Saturday's storm proved less catastrophic than the system that passed through in December, heavy rain and strong winds battered the area, causing damage along Cave Mill Road and the surrounding area. [Grace Ramey/Daily News via AP]

Kentucky Gov. Andy Beshear declared a state of emergency on Saturday as powerful storms ripped through the state causing flash floods, power outages and property damage, including from a possible tornado in Hopkinsville.

There were no immediate reports of any injuries or deaths. The storms come just three weeks after deadly tornadoes tore through the region, killing more than 90 people in five states, including 77 in Kentucky.

As of Saturday night, much of Kentucky and West Virginia were under a flood warning. Portions of eastern Kentucky, Tennessee, Arkansas, Louisiana, Mississippi and Alabama were under a tornado watch.

The Kentucky governor’s office reported flash flooding had caused water rescues and many road closures in the southern and central portions of the state.

Heavy rains were expected to continue throughout the day in much of Kentucky, followed by a cold front, which could complicate emergency response efforts.

In the southwestern Kentucky town of Hopkinsville, several downtown businesses were damaged by a possible tornado. WTVF-TV reported a Family Dollar store had been largely destroyed and the roof of a Marathon gas station had blown into a park across the street. Other nearby buildings had roof damage and there were many downed power lines, the station reported.

Another possible tornado touchdown occurred in Taylor County, in the middle of the state, where a number of homes were damaged, according to the governor’s office.

“It is devastating that we are once again experiencing severe weather just weeks after the deadly tornadoes hit Western Kentucky. Sadly, some counties have been affected by both of these events,” Beshear said in a statement.